REVIEW: The Seduction of Miranda Prosper by Marissa Day

I never know what grades to give erotica, because, much like exotic foodstuffs, it is a genre that is peculiarly subjective to what Englishmen call taste, the French call bon gout, and everyone else chalks up to appetite. But let’s be fair, Ms. Day, most erotica is-‘even without the idiosyncratic presence of taste mucking up objective perspective-‘crap. Oh yes, it is. Even when it makes you horny, there is always moments-‘indeed! often there are many moments, in which the reader is forced to roll her eyes heavenward, not in ecstasy, but in an emotion that can be more succinctly summarized as, "Oh For the Love of Jesus and All the Angels, you have GOT to be kidding me with this?!" a moment, which is, invariably, a buzz-kill. 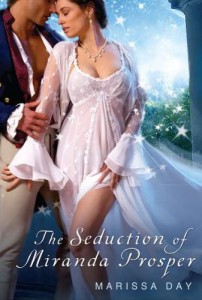 In short, most erotica sucks ass in both a literal and metaphorical sense.

Going into this book, I had no idea it even was an erotica. In retrospect, this is quite funny because I should have cottoned on to something upon viewing the cover. But perhaps I am so inured to clinch covers that a scantily dressed female hardly registers in my brain as code for "Erotic Romance." So when I started reading, I was a bit annoyed to find hard cocks a-thrusting against trouser plackets before the word go. I said to myself, as I so often do, "What the hell is this?" It took me until page 5 to figure it out, when I experienced a petty and slightly squalid version of Damascus. "Ohhhhhhhhhhhh!!!" I exclaimed. "It’s an erotica! No wonder! Okay, I’m with you now." This was not your fault, Ms. Day, but mine. Sometimes, I’m the slow kid in the class.

The plot follows along these lines. The erotica is set in an alternate and magical Regency era, in which the borders between the land of the fey and our own become thin every once and awhile. During these periods, humanity is in danger from the fey. The fey seem to be a species whose idea of a good time is tormenting humans and feeding off their magical energy. Kind of like aliens from outer space, who for some reason always want to probe people. Such are these fairies. They enjoy a good probe. The humans keeping the borders safe are sorcerers. Sorcerers are born with a certain amount of energy, which becomes depleted after heavy use and they have to wait for it to regenerate. However, certain other humans exist called catalysts. These are men and women who can tap into the earth and its magical power and feed that magic to the sorcerers in order to give them more magical energy when they are running low. Magic in this world works a lot like electricity. Let me have one of your characters explain it:

Corwin's brows shot up in genuine surprise this time. "Excellent. Then you are perhaps aware that the electricity may be both generated and stored."

"I have heard something of it, yes."

"It is rather the same with the power of magic. Like electricity, magic is a natural occurrence. A Sorcerer carries a store of it inside himself on which he may draw to work his art. But that store is small, and can be quickly depleted. Much larger supplies of magic exist in the natural world. Some places, indeed, are huge reservoirs of power."

"Then why does not the Sorcerer draw on those?" Miranda asked.

"They do," replied Corwin. "But tapping nature's reservoirs can be difficult, and time- consuming. It takes great skill and sometimes many years to create the tools necessary to reach it."

"You're talking of magic wands and so forth?"

"I am." Corwin nodded. "And such tools are not always reliable. They can channel too much magic into the wielder, or not enough, or the shape and nature of their making can warp the spell. So, most Sorcerers prefer to rely on their own inner stores of magic, or on a Catalyst."

"A Catalyst is a person who can naturally attract and channel the magic of the world around them, as one of Dr. Franklin's lightning rods channels the lightning.

"You, Miranda Prosper, are a Catalyst."

Actually, the magic part is the part that works best. As a long time fantasy reader, I can tell you that the limits and parameters of how magic works is often the thing that goes wonky the fastest. However, Ms. Day, you conceive a magic that operates in a clear manner and does not enable the sudden creation of a deus ex machinas, or even make for head-scratching actions that are nonsensical within the limits of the world you have created.

Back to the plot. Miranda Prosper is just such a catalyst, although she doesn’t know it. What she also doesn’t know is that catalysts all over London are being kidnapped and murdered. That being the case, two sorcerers have been sent to guard her. Corwin and Darius. In a switch from the predestination that is a character's hair color, Corwin, who is the dark one, is the happy go-lucky half of the duo, whereas Darius, the blonde, is the grim and suspicious one. Corwin magics Miranda out of the ballroom, where she is sitting as perpetual wallflower, out into the back garden where Darius is waiting-‘naked. They then proceed to divest her of her virginity and are amazed by what a powerful catalyst she is. Sex, of course, is the best way for catalysts to get power to sorcerers. Heck, this is an erotica.

I rolled my eyes very few times while reading this. An unusual occurrence when I read erotica, I tell you. Given what little space there actually is for things like character development, you handled the burgeoning relationship and its requisite anxieties, among Miranda, Corwin, and Darius quite well. Corwin is a bit insensitive, like. He is under the impression that things will turn out well. He and Darius are already in a long term relationship, and while they have shared women before, they have neither developed feelings for them. Darius is quite anxious about Corwin’s feelings for Miranda and can barely process his own. Miranda, who isn't as dense as Corwin, picks up on this anxiety and is reluctant to hurt Darius or intrude upon the relationship between the two men. You played this out quite well, given, again, the limited space in which you had to do it. Even so, both the plot and the characters feel truncated, as if they were a quick sketch rather than a fully developed picture.

This was because of the   ever present problem of erotica. Everything gets solved by shagging each other senseless. Worlds get saved, people realize their true feelings. Childhood traumas are healed. If anyone ever writes an inspirational erotica, I imagine the onset of the Second Coming will be directly preceded by the main characters knocking boots. In this book, there is a similar tendency. Darius and Miranda are left alone together by Corwin to work out their feelings for each other. Which they do. By shagging. The world is not saved by shagging, thank god. But characters are built through shagging.

This is just an aside but, what is it with every menage a trois having to lead to a relationship between all three participants? Like why can’t there be one where the main couple is like, "Hey, thanks for playing. That was awesome. Grab a mint on the way out and help yourself to anything in the fridge." Huh, huh? I mean, I don’t have anything against the trope, I’m just curious as to why that is the case to such an extent that I can’t even recall having SEEN the alternative.

The story, I find, is everything. And it was the story that was lacking here. C.