REVIEW: The Seduction of Elliot McBride by Jennifer Ashley

While I love the idea of this book, I felt that there were too many shortcuts taken to get us to the emotional hits you delivered. 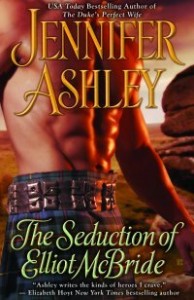 Elliot McBride went off to India to make his fortune. While he was there, Elliot became captive to a “tribal” band. During his captivity, he was tortured and made to do terrible things. When he finally escapes, he makes his way back to England a broken man.

The one thing that kept him sane was the thought of his childhood love, Juliana St. John. As the book opens we see Juliana getting jilted yet Elliot is there to save her and marry her because he believes that Juliana can drive the darkness away.  They marry immediately and leave for Elliot’s newly purchased estate in northern Scotland.

In northern Scotland at a remote estate with Julianna by his side, Elliot hopes to find peace.  Julianna is gladdened by the marriage but also afraid for the boy she once loved.  The Elliot that she has married hides in dark holes, has memory gaps, loses concentration, and mistakes village boys for mortal enemies.  She is put down in a strange place, surrounded by servants that Elliot has brought with him from India, but she meets each challenge.  Julianna’s composure and equanimity is remarkable albeit a bit on the unbelievable side.  Her seeming easy acceptance of all that Elliot brought to her made their internal conflict almost non existent.

Rounding out the book’s characters are the half English, half Indian child; the loyal Indian servants with one serving as the wild old sage; the half crazed landowner; and evil neighbors.  Threats to both Elliot and Julianna’s life serve to provide some external conflict.  All of it seems a little artificial.  There are half hearted attempts to show the cultural clash between the Indian and Scots but both are treated like superficial caricatures and the India is primarily referenced when describing the incidents leading up to Elliot’s capture. The dialogue also includes Jayne’s least favorite faux brogue. I don’t know if a Scottish romance historical book exists without at least one “dinnae fash yourself.”

The book takes us through some of Elliot’s bad moments – night terrors, sleep comas, days of disappearance. Yet he is somehow miracously healed through the gentel love and acceptance of Juliana. It’s not that I don’t think it couldn’t happen, it is just that it doesn’t feel believalbe within the story. We jump from emotional plateau to emotional plateau and I’m not certain how we got there.

There are obligatory entrances from past McKenzies and future ones like Daniel that really had little place in the story other than to appease fans (like me) or provide sequel bait (Daniel).

The feel of the story is great as Julianna patiently tries to overcome Elliot’s mental and emotional barriers but the overall construction faltered.  The two seemed to start out the book in love and the swift marriage and consummation appeared to reanimate those old feelings but it all seemed too truncated. Julianna’s initial fear was too short; Elliot’s climb out of the pit of madness too easy.  Both situations could have been teased out for greater affect.

The damaged hero and the heroine who saves him can be a great story and I loved it in the madness of Lord Ian McKenzie, but even then I didn’t feel the hero was quite so damaged as this one and in need of more than the peace of a remote estate or the love of a good woman.  C