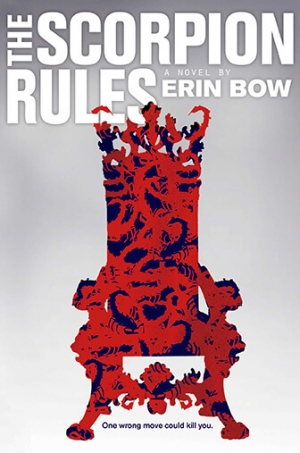 My first introduction to your work was Sorrow’s Knot, which I enjoyed. I still haven’t managed to pick up your other novel, Plain Kate, but when I saw that you had a new book coming out, I immediately decided to give it a try. That’s the power of writing a memorable book in Sorrow’s Knot.

In The Scorpion Rules, artificial intelligence has gone sentient and taken control of the world in the future. To maintain peace, every nation must turn over a child to the ruling AI. And not just any child either, but generally a child of the country’s ruling monarchy. After all, a hostage is only as effective as their importance. If a country wages war on another country, the children of the involved territories are executed.

Greta is the de facto leader of her group of child hostages. She is the princess of what is essentially Canada. Their group has enjoyed relative peace and stability. Hostages have come and gone, but the order of things has never been truly disrupted. That changes when a new hostage from what is essentially the United States arrives.

The new addition sends their group into flux and uncertainty. He doesn’t understand the unspoken rules. For just as the hostages are meant to guarantee the good behavior of their home territories, collective punishment and peer pressure are meant to guarantee the good behavior of the hostages. Sure, you can act out but if everyone else is going to be punished too, chances are they’re going to make sure you don’t act out again. Unfortunately, things come to a head when Greta and the new addition’s home territories begin to fight over water access.

While I thought The Scorpion Rules had an interesting idea, I kept getting distracted by how similar it was to other post-apocalyptic novels and movies. It’s hard to read the story of a sentient artificial intelligence system killing and ruling over humans to protect the earth without thinking of the Terminator movies. These days, you definitely can’t think of children being taken to guarantee the good behavior of adults without being reminded of The Hunger Games. The Scorpion Rules lacks the action from either of those two stories, relying more instead on strategy and political maneuvering (as teenagers would do, mind you). In that way, I was even reminded of Game of Thrones! I don’t mind being reminded of things, and I certainly don’t mind similar books, especially if they deal with themes I like, but more often than not, I thought The Scorpion Rules had an identity crisis.

This impression wouldn’t have been as strong had Greta been a stronger protagonist. I struggled with her character because she read more like a cipher than anything else, and in a book like this, the stronger the personality, the better. I understood the reasons for her passivity. She’s been a hostage since she was very young and was raised in that environment. But it ultimately results in a reactive character. It took a while before Greta started taking action and that can be trying on a reader’s patience.

There are things I did like, though. I liked that the hostages were casually diverse. I liked that it was multicultural and not heteronormative. I really liked the relationship between Greta and her roommate, Da-Xia. So much so that I was a little confused by what was going on between Greta and the new addition, Elian. There were points throughout the book where I couldn’t decide if the set-up was meant to be a love triangle or polyamorous. To be honest, I still haven’t figured that out and it’s been a week since I finished the book!

The Scorpion Rules had a lot of promise, but it didn’t live up to them. It’s a different book from Sorrow’s Knot but its ending is similar in feel that it’s melancholy and solemn. Based on Goodreads, it sounds like there will be a sequel or two. I probably won’t be checking them out. Maybe if Greta had been a stronger protagonist, I would feel differently but there’s nothing to keep me reading. C