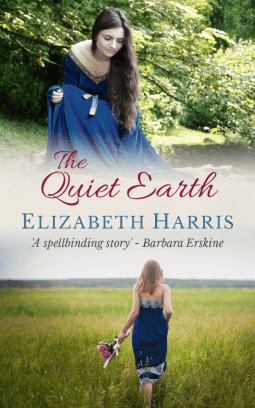 Warning – One character has suffered a miscarriage and works through stages of her grief while another loses a child soon after childbirth.

Winter 1994, and in the Wye Valley a story hidden for almost eight centuries has just been unearthed. For Nina, an ecologist working alongside local archaeologists, the discovery of a baby’s grave dating from the thirteenth century is of far more interest than just academic. Nina is mourning the loss of her own baby – a fact that seems not to have gone un-noticed by the spirits disturbed by the dig.

And she is not alone in feeling an unusual affinity with the dig site: her boss Mark also senses strange presences there. Nina is drawn to Mark, but she is unsure of their relationship, and unable to communicate her feelings. Mark, meanwhile, is not a man given to clear expressions of affection and he too is mourning – mourning the failure of his engagement.

As Mark and Nina continue to work on the Wye Valley site, their developing relationship has uncanny echoes of the past. The baby buried in the Wye Valley is the child of Gawyn, a headstrong Crusader knight who once travelled from France to Wales with a sacred secret; a secret that has lain dormant for hundreds of years. Until now… The baby’s mother, his wife Roese, followed a hugely challenging and at times death-defying path to find her home in the quiet Wye Valley.

As Nina and Mark delve ever deeper into the past, they find out more of Gawyn’s story, his travels across Europe and – perhaps most important of all – his encounter with a group of religious believers who held to their beliefs despite being mercilessly persecuted by the Crusaders.

With their own story developing and sometimes mirroring that of Roese and Gawyn, will Nina and Mark find a spiritual home?

Only time will tell…

After enjoying “The Sacrifice Stone,” I snatched the opportunity to read another of your books. From the blurb, I could see it would resemble that book: dual timelines, a mystery that ancient ghosts want modern people to solve or put to rest along with some paranormal manifestations – well, for the ghosts to see things settled, there’d have to be, right? For the majority of the story, I was just as involved and madly flipping pages. But towards the end, things let me down a bit.

I do like how all the characters are complex and, honesty here, sometimes have their unlikable moments. They seemed real to me. Most of the story is told from the POV of the historical characters – three of them vs one modern one. Learning about their lives, their interests, how their world “ticked” was fascinating.

These are people at home with their world and intimately attached to it. You had to be since you’d starve, sicken or freeze without understanding your environment. No corner grocery store if you ran out of food, no local pharmacy or GP if you got sick and everyone had to endure whatever weather came at you.

The details and time frame of the story are carefully selected and it’s wonderful to see a story set so carefully and making use of actual history rather than “fighting” it, as so often seems the case with historicals. There’s a hermitage rather than an actual monastery, landed knights instead of great lords, border disputes, the role and rights of women, England’s interdiction under King John and the horrific Albigensian crusade against the Cathars. I was lapping it up.

The woo-woo stuff started getting thick and fast with not only Nina – and occasionally Mark – experiencing things in the contemporary world, but also Gawyn and Roese once or twice latching on to psychic manifestations. Perhaps it’s because I just finished reading “The Sacrifice Stone” but the rapidly increasing number of paranormal events wore thin and the arrival at precise moments when no other means would have allowed important information to be known became deus ex machina – esque.

With the story told from four PsOV – and for lengthy periods at a time – I sometimes got lost when there was a change, having to try to remember just exactly at what point this person’s stretch was left, what was happening and what the cliffhanging stop point had been. For the most part, each section was interesting but I felt discombobulated at the switches.

I did say “for the most part” as towards the end of the story, a few sections seemed to drag with more information being included than felt necessary. Mentally I was urging the story on whereas before I was lost in the intensity of it and at times slightly frantic when one part had to stop for another to start again.

The romances also didn’t work as well for me. The modern one was so understated that at times I wondered, along with Nina, if it were really happening. The gentle way it drifted to a conclusion was less than wow-ing. But the main disappointment for me was in the historical one. Or should I say both of the historical ones. In one case I felt almost kicked in the teeth over what happened to one couple – I went through all their pain for this?? And not to know the true fate of one person?? Yes, surmises can be made based on the evidence the story did present but damn it! I’d put emotion into this and not to know was maddening. The second love was – like the contemporary one – too little although the epilogue’s archeological conclusions did make it slightly more palatable.

So, a fantastic start and overall good body of the book fizzled at the end to something that left me unsatisfied and slightly annoyed. There are also some triggering events with a miscarriage and the loss of a child that I would urge readers to be cautious about. I did like the message of religious tolerance repeated here and plan to read up more on the Cathars so … there is that. But the romances … not what I was hoping for, to be sure. C

→ Jayne
Previous article: Friday News: Not even sure how to title this one
Next Post: REVIEW: A Fighting Chance by Shannon Stacey