REVIEW: The Other C Word by MK Schiller 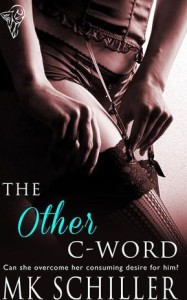 I bought this because a lot of readers in a message board forum were discussing it.  I had to buy it at Kobo with a coupon because otherwise the price would have been a deterrent because you were a new-to-me author.  The gist of the story is that Marley Mason has a negative view of her own sexuality and expresses herself in engaging in commitment free sex with a rotation of three guys.  Enter the new consultant  Richard Randy.  He gets her assigned to him as his temporary assistant.

There were initial things that bothered me such as the overt sexual harassment by Rick. Yes, Rick and Marley acknowledge that his behavior is inappropriate (i.e., calling her Garter Belt Girl) but that doesn’t take the offense away.  And thus it reduced the believability of the Richard (whose name I couldn’t stand) as a competent businessman. He was clearly more interested in getting into Marley’s pants than turning the company around. Then again, this is a romance, not a FORBES non fiction business tome.  Further, Richard was coming on to Marley constantly while he had a girlfriend. That was even less attractive. The good thing is that the story isn’t really about Richard. Richard is the straight man to Marley’s screwball character.  He’s perfect in this story. He is patient, knows when to press, and when to back off. He deals with all of Marley’s emotional difficulties with the panache of an experienced therapist.

I liked the slow pace of the development of the romance but I was less convinced about Marley’s portrayal of sexual dysfunction.  For instance, she was supposed to have this rotation of guys but early on she admitted she was down to one due to one of her hookups getting into a serious relationship and another went home after an office function with her office nemesis and the third wasn’t very good in bed. Marley’s promiscuity, if you can call it that, was fairly illusory. I felt that there was a little cake and eat it too syndrome going on here.  I was supposed to view Marley as a slut yet she’s doing anything particularly slutty.  The conflict is primarily Marley’s inability to commit to a relationship, preferring these meaningless sexual encounters.

The first half is  hijinks and humor with Rick giving Marley a zesty bar to supplement her poor eating habits and Marley doing a spreadsheet and determining that Rick is only giving her zesty bars on her days wearing a skirt.  There’s the seven day wait between taking a blood test and getting results that is used to heighten sexual tension. About the 50% mark, however, as Marley and Rick’s non relationship deepens, the story turns more serious.  The “secret” of Marley’s past is blurted out and Rick and the readers have to deal with it.  I use the scare quotes because she blurts out the issue to her family early on.

Marley was molested by her father for four years.
After Marley’s secret is revealed, the story takes another turn and ends on a rather dull note with Marley and all the characters explaining their feelings and wrapping up the HEA.

While I liked Marley and felt the story had moments of humor, good sex, and chemistry, it was hard to become engaged and the ending was filled with too much explanatory dialogue and not enough action.  C

Finally, I have to say that no man (or woman) looks good in a denim suit.

He was wearing a jean suit but it was totally hot. His jeans pleasingly accentuated his strong hips, and he wore a tight fitted button down black shirt with green tie that brought out his piercing, emerald eyes. A modern cut, denim fitted jacket topped it off. It was the perfect combination of conservative casual, and it made my mouth go dry. Ironically, we matched. 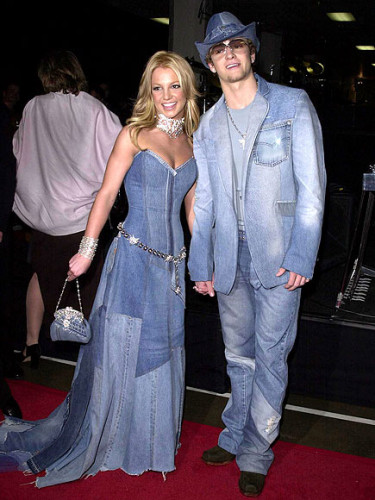