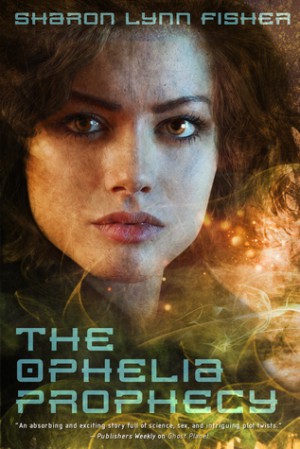 I’ve been in the mood for something different. When I saw The Ophelia Prophecy, I remembered your previous effort, Ghost Planet. While I had some reservations with that novel, they weren’t enough to deter me from giving you another try. I guess I’m still determined to get into the SF romance genre (or at least SF with romantic elements.)

The Ophelia Prophecy takes place in a future after the apocalypse has happened. Humans genetically engineered the Manti, human-insect hybrid super-soldiers, and those same soldiers later turned on their creators, effectively wiping them out. What’s left of humanity lives scattered across the world.

Asha is an archivist from Sanctuary, the last human city on earth. One day she wakes up outside the city borders, with her only companion being Pax, a Manti prince. She has no recollection of how she got there nor does she know why Pax is with her. Pax doesn’t know either and suspects Asha of being a spy.

Pax decides to take Asha with him to the Manti capital in what was once Spain. But along the way, they run into further complications. Among them is the fact that Pax has “tuned” to Asha — a Manti condition that is the equivalent of soul-mating. This makes him irrational when it comes to her, a fact that Asha can take advantage of when she later regains her memories and remembers her mission.

Because of my reaction towards your first novel, I wasn’t sure what to expect when I picked this one up. Would it be romance, science fiction, or a blend of the two? I will say that I think this is more of a romance than Ghost Planet. The relationship between Asha and Pax is more central to the story. They are enemies (yes, it’s the good old enemies to lovers trope) who must cope with their mutual attraction while deciding if the other party can be trusted. After all, Pax thinks Asha is a spy and Asha was raised to believe the Manti want to destroy all human life.

Then there’s Pax’s soulmate bond to Asha. Given that the Manti are essentially conquerors and oppressors to humans, this aspect could have gone in questionable directions. That didn’t happen (and I was glad). Pax fights his instinctual response towards Asha and in fact, puts several failsafes into place. For example, he commands his bio-organic ship to protect Asha from him. He wants her but he doesn’t want to take her against her will. And besides, he’s still not sure she won’t betray him. Since Ghost Planet also featured a soulmate bond of a sort, it appears that this is a thing of yours. That said, I don’t think much was done with it here. It was neither subverted nor executed with full dramatic effect, in my opinion.

I found the worldbuilding a little shaky. I understood that the Manti were genetically engineered super soldiers. I understood that their basis was mostly insectoid (hence, the name). I also understood that, as we know all too well, science outpaced ethical considerations and many people opened garage labs and unleashed transgenics into the world. So my question is, if the Manti are insect-based, why are there people who are more wolf-based running around? This is a result of the garage labs? Was there a reason for this? When this came up in the novel, I couldn’t help but wonder if this was just a convenient way to sneak a werewolf into the story. Thankfully, there was no shapechanging involved but I was dubious for a while. If we are to believe that the period before humanity was wiped out was the transgenic equivalent of the Wild West, why aren’t there other types of transgenics around?

I also thought the first half of the novel was stronger than the second half. This is a shame because when it’s reveal that Asha is

more or less a sleeper agent
, I was completely excited. That’s a plotline I enjoy and would have loved to how it would have gone. It could have been edgy and thrilling. Instead the plot descends in a tangled mess of rebellion, power struggles, religious fanaticism, and family strife once Asha and Pax arrive in the Manti capital. That’s fine because I do love me some political intrigue but this is no Game of Thrones. (And after A Dance with Dragons, maybe we should stop aspiring to be Game of Thrones.)

While I had hopes for The Ophelia Prophecy, it just didn’t live up to my expectations. (When will I learn to stop having them?) It’s competently written and a fast read, but I wonder if it just tried to do too much. Like Ghost Planet, this book also felt like it was setting up a series. I do think it’s a standalone like its predecessor but the fact that this is the second time I’ve had this reaction, I suspect there’s something about your endings that don’t leave me satisfied. C

→ Jia
Previous article: REVIEW: It Had to Be You by Delynn Royer
Next Post: In Search of The “Pure Reader”