REVIEW: The Only Thing to Fear by Caroline Tung Richmond 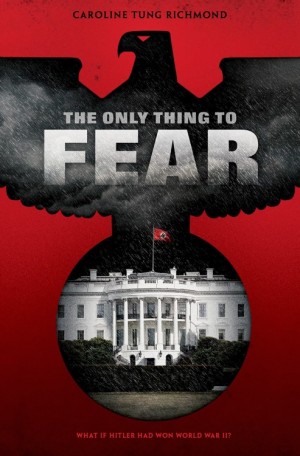 For the benefit of our readers, I’m going to repost the cover copy here. It’s been a while since I’ve read an alternate history, and I’m realizing it’s awfully hard to be concise when describing it!

In a stunning reimagining of history, debut author Caroline Tung Richmond weaves an incredible story of secrets and honor in a world where Hitler won World War II.

It’s been nearly 80 years since the Allies lost WWII in a crushing defeat against Hitler’s genetically engineered super soldiers. America has been carved up by the victors, and 16-year-old Zara lives a life of oppression in the Eastern America Territories. Under the iron rule of the Nazis, the government strives to maintain a master race, controlling everything from jobs to genetics. Despite her mixed heritage and hopeless social standing, Zara dreams of the free America she’s only read about in banned books. A revolution is growing, and a rogue rebel group is plotting a deadly coup. Zara might hold the key to taking down the Führer for good, but it also might be the very thing that destroys her. Because what she has to offer the rebels is something she’s spent her entire life hiding, under threat of immediate execution by the Nazis.

In this action-packed, heart-stopping novel of a terrifying reality that could have been, Zara must decide just how far she’ll go for freedom.

In case readers couldn’t guess, while this is alternate history, it’s actually a stealth dystopian. (Stealth dystopian? Is that a thing? I’m going to make it a thing.) It has all the elements: oppressive regime, a social elite, a beaten down populace, and an underground rebellion. So despite the premise, it will feel familiar in some ways.

To emphasize a point briefly mentioned in the cover copy, Zara is biracial. Her father was a Japanese super solider. I do appreciate the attempt to bring more racial diversity into the mix, given the fact that the society in The Only Thing to Fear prizes the blue-eyed, blond Aryan ideal. Because of Japan’s role in WWII, Zara is not treated well by her peers due to her visibly Asian features.

I’m of two minds about this. I liked that it was touched upon and yet, this flattens the portrayal of race relations in the U.S. I found it hard to believe that Asian people were the only people targeted by racism. Sure, maybe they were the group targeted as a result of WWII, but one war can’t wipe out the racism embedded in U.S. society from centuries before. Perhaps we’re supposed to assume the race hierachy shifted drastically in this timeline, but I’m not sure.

Much of the book is spent on Zara trying to get in with the rebels. Her uncle is a member, but after Zara’s mother (also a rebel) died during a mission, he’s become reluctant to involve his niece. I found Zara frustrating at times, although I suspect this speaks more about my age than anything else. To my eyes, she failed to understand her uncle’s concerns. He’d already lost so many people because of the rebellion, including his own sister. He didn’t want to lose the only family he had left. Zara’s failure to understand this driving force behind his refusal to let her join irritated me.

Since Zara’s father was a super soldier, it doesn’t take much to guess what secret she’s hiding. As you can imagine, those in power have no desire to let people with those special powers running around among the oppressed masses. I thought this was an interesting part of Zara’s character, but I also wish she didn’t conveniently sprout new abilities when the plot called for it.

And then there’s Zara’s relationship with Bastian. I honestly felt like this was a missed opportunity. While I liked that Bastian wasn’t an asshole (to Zara or in general), I wished we could have seen more conflict between them. By which I mean, there should have been more pervasive class conflict. Bastian is one of the social elite. Zara is not. When people see them together, they assume Zara is his plaything because why else would someone of his status seek her out? But that’s only the most basic type of class conflict. Despite his father, Bastian grew up privileged. I think that should have come into play more, especially later in the book.

In many ways, I think The Only Thing to Fear is an interesting thought exercise. What if the Axis Powers won WWII? What would that world look like, if super powers were in play? On the other hand, I’m not quite sure the setting makes sense. Can three countries really divide the rest of the world between them and keep them under control? But maybe that set the stage for this book. C