REVIEW: The Next Best Thing by Kristan Higgins 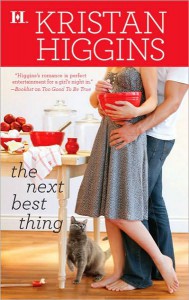 I am a fan of your work. It’s in my bio, over there, on the right hand side—-> But this book didn’t work so well for me because, primarily, I felt Lucy was a wallower.   This is a story about loss and everyone’s attempts to recover from loss.   For some, the loss is part of their identity or has been for so long that a person can’t be mentioned without the reference to the loss.

This is the case for Lucy Lang and the women in her life.   Lucy is a widow and virtually all the women who are connected to her are widows.   Lucy, her mother, and her aunts all work at the family bakery and collectively the women are known as the Black Widows because each woman lost her husband at a young age and none of them have remarried. Lucy’s sister, Corinne, is  obsessed  with her husband’s health because she is convinced that he will die soon, just like all the other spouses in the family.

Ethan Mirabelli is the younger brother of Lucy’s late husband, Jimmy.   Ethan and Lucy have had a friends with benefits relationship as Lucy terms it, unable to acknowledge the two of them as “lovers”.   Lucy has decided that she is going to “break ranks” from her family and try to remarry and have a family.   She tells Ethan that they have to stop sleeping together.

Ethan, though, has played the role of the spouse for longer than Lucy’s marriage.   He stood by her through her seemingly never ending grief (she still counts the days of her marriage); he found her a new apartment; bought her games; cooked for her; listened to her; talked with her; held her while she cried; and satisfied her emotional needs.   Despite all this, Lucy is determined to find herself a husband and Ethan is not it.

Basically everyone in this story is caught in this perpetual cycle of grief.   It’s almost as comforting as Linus’ blanket.   It provides identities and belonging for the women.   It justifies Ethan’s ongoing, but sick relationship with Lucy.   It helps Lucy cling to the past and ignore the good things in her life.   Lucy watches her wedding video over and over, reliving the joy of the wedding day (although not the marriage itself) and then the subsequent grief of her loss.   She can’t give up the piercing sadness her loss brings to her.   It’s like the Bruce Willis character in Sixth Sense.

Despite Lucy’s declaration that she cannot bring herself to love anyone like she loved Jimmy, she finds herself dating a man that could be Jimmy’s ringer; while still engaging in some kind of relationship with Ethan. So despite never wanting to love again, she finds she cannot help but want Jimmy’s ringer.

For some reason, in order for Lucy to move on and to love again, she had to find out that Jimmy wasn’t the saint that she had created him to be.   This did not indicate that she had healed from her loss, but rather suggested that Lucy did not have the right to move on unless Jimmy was somehow flawed.

The story is emotional, mostly due to the fact that everyone is chronically sad throughout the story but I felt overtly manipulated into finding a HEA for Lucy and Ethan.    By her actions, Lucy wallowed her in grief. She worked with the Black Widows. She watched her wedding DVD constantly. She talked to Jimmy in her mind, sometimes believing her talked back to her. She refused to close the door on her marriage by not visiting his grave. She slept with his brother and dated his dead ringer. When given the chance for happiness, she turns away. Lucy, I felt, was in love with her grief more than she was in love with any one else.

The most authentic relationship was that between Corinne and her husband.   Ironically, Corinne’s obsession with her husband’s health was actually causing him stress related illnesses. In order for him to survive and their relationship to survive, Corinne had to start to let go of the control that she perceived she had over death.   C