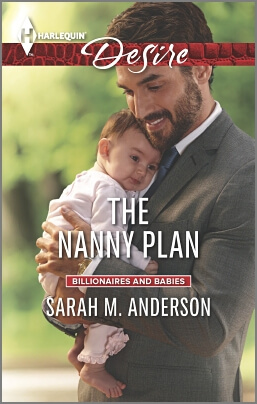 This billionaire bachelor has a baby challenge…
Being a father to his orphaned infant niece is out of this tech billionaire’s comfort zone. Lucky for Nate Longmire, Trish Hunter is a natural at motherhood, and she’s agreed to be his temporary nanny. But long glances, slow kisses and not-so-innocent touches are strictly off-limits…

Trish’s goal is to help Nate in exchange for a big donation to her charity for Lakota kids. Falling for her bachelor boss—and his adorable baby girl—is not part of the plan. But when the month is up, will she be able to walk away?

I loved reading your rodeo Superromance so much last year that it ended up as one of my top books of the year as well as one of my nominees for our 2015 DABWAHA tournament. Even though I knew this book is from a different Harlequin line, I’d hoped I would like it as much. I did like things about it but perhaps the Desire line shorter length limited my overall enjoyment of this story.

Trish is a woman with a plan who executes it to perfection. Nate’s slideshow presentation that she corners him at, has all the POC as the ones in need – which Trish catches and is annoyed by. He gets an unpushy but frank lesson in privilege when Trish explains the needs of her charity. This is furthered over the course of their relationship as Nate learns first hand what Trish had to overcome to get where she is today. But what about his brother’s mental health issues? I kind of expected more than I got there.

Nate comes across more as helpless/gawky geek than scary stalker when he listens to Trish’s pitch for her charity and then later when he’s trying to convince her to work for him as a nanny for his orphaned niece. He also shows some grief at the loss that brought Jane to him. Perhaps I just don’t read this trope enough but honestly, I don’t recall actually seeing characters displaying as much to-be-expected bereavement as I do here. But his other angry emotions seem right and normal to me as well. He’s left with a few unsettled issues with his older brother though thankfully most of them had been resolved.

Trish also comes across not as someone trying to flirt her way to money for her charity but as an everyday, average Jane – which intrigues Nate. They have a nice vibe going from the start. More equal than usual even before Nate needing Trish’s childcare expertise not only levels the playing field but tilts it in her direction. And okay, Nate is charmingly clueless about how to take care of a baby. Though why he hasn’t found a nanny in 2 weeks is a mystery only needed by the plot set-up.

Nate just keeps getting cuter about being scared to death of not doing something correctly with his niece, Jane. I can tolerate it because he’s also willing to learn to make formula properly, change a diaper, and slept in a upholstered chair for 2 weeks in the nursery so as not to risk SIDS. He truly cares about his niece. Yet, Jane is a plot moppet. But then she’s only 6 months old so could be little more.

I’m enjoying their slowly developing relationship. The way they can talk easily and already tease each other a little. Even the housekeeper and Nate’s gopher notice and approve. But, but … this is a Desire. Something feels off. Though not for long, I discover.

Trish has made it very clear that sex has no part in her employment at Nate’s house. He’s also made it clear he understands that and his word is his bond and bless his heart he tries to stick to it. He’s got very good reasons to go along with Trish’s very good reasons to not have sex with the other. Period. She’s even got the V card. But suddenly it’s like they’re drag racers, revving their engines before laying down rubber and racing down the strip to get to the bedroom. And Trish, Miss V, turns into a striptease expert. I doubt raising nine of her siblings taught her that. Yep, I’m reading a Desire and not a Superromance. Now things feel normal.

Things get sort of awkward as they work out an affair / relationship and then a week of this zips by. At least Trish owns her wants and Nate is more than accommodating. Yay for that.

Then we’re told that Nate is beginning to see Trish as more, as the woman he wants in his life who cares for him instead of his billions. Then Trish starts on about how she doesn’t fit his lifestyle, how poor she grew up. Her next reason makes more sense as she explains that she has things to do in life and responsibilities, plans and goals beyond being someone’s nanny, that she’s raised enough children who aren’t her own. Those I could understand given her mother’s history with men and what Trish saw growing up. Still everything is compacted and feels more like Insert Conflict Time rather than real.

The ending is a more up to date – and richer – version of John Cusack with a boom box. Hokey and a little eye rolling but fun to read. Still it’s Nate buying his way into and out of things and there’s this niggle I can’t suppress about that. Sure he’s given her charity a ton of money but it’s all too fast and there’s no hint of how they’ll work out their future together. It’s shiny and pretty and wrapped in a bow but it’s also like soap bubbles as there’s not enough time to ground it more in real time. C