I loved reading teen horror novels when I was younger. Old school Christopher Pike? Fear Street? Sign me up! Despite the explosion of YA novels in recent years, however, I haven’t seen many fall into the horror genre. So when I read the premise of your novel, The Murmurings, I was excited. At last! 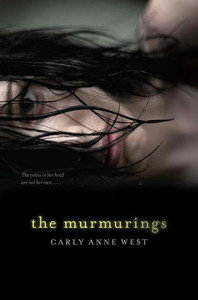 Sophie became a social pariah when her older sister, Nell, was institutionalized for hearing voices -– voices that later drove her to commit suicide in a bizarre and highly public fashion. But Sophie suspects there’s something else going on. First, a diary chronicling her sister’s days in the institution was mysteriously left on her car seat. Then Nell’s doctor makes persistent, and invasive, phone calls to her home, asking after Sophie.

Her home life is a mess. Nell’s death left their mother an alcoholic who can barely get out of bed in the morning. For the past several months, Sophie has all but taken care of herself. Though she practically has no friends at school, she forms a connection with classmate Evan. Normally a jock would never interact with an outsider (at least in the world of YA novels) but it turns out they have a similar history. Evan lost a cousin to mental illness –- and his cousin’s symptoms eerily mirror those of Nell.

Together they delve into the mystery of what happened to Nell. Because, you see, Sophie doesn’t believe her sister actually killed herself. And also because Sophie has begun to hear voices too.

With a cover like that, I expected creepiness. And for the first parts of the book, I got that. Low murmurings that you can hear but not completely understand. Shadows moving out of the corner of your eye. Distorted reflections in mirrors. Very reminiscent of Asian horror cinema, which is my favorite kind of horror. But that kind of atmospheric horror can be difficult to sustain and after a while, The Murmurings began to falter.

Halfway through the novel, the tone changes. What began as creepy horror shifts to a paranormal. I compare this to the difference between an Asian horror movie featuring women climbing out of mirrors to an American horror movie about a girl being wrongly institutionalized in a mental asylum run by a mad scientist. They’re both clearly horror but not the same kind, stylistically speaking. As someone who generally doesn’t find American-style horror scary, this resulted in a lessening of the tension and suspense for me. Another reader might find the beginning slow but the second half to be more their pace. I’m well aware that decrepit mental asylums are a staple setting of the horror genre but that’s a subgenre that’s never appealed to me.

The romance between Sophie and Evan is awkward, and not in the charming way. There was no chemistry between their characters, and that made their teenage instalove even harder to believe. I found their interactions wooden and rote. In some ways, I think the romance was meant to tie both halves of the novel together — the creepy beginning and the claustrophobic ending -– but it didn’t work for me.

I really wanted to like Sophie. Her relationship with Nell propels a good chunk of the plot, and I love stories that explore relationships between sisters, even those that are tragic. But she made some questionable decisions. We’re talking “Don’t go down into the basement if you hear a funny noise and there’s an axe murderer on the loose!” type of logic. There were multiple instances where I facepalmed. Yes, let’s go meet the stalkerish doctor who’s been leaving creepy, vaguely threatening voice mails alone. Yes, let’s go to the mental asylum without telling anyone that’s where you’re going. Survival instincts, get some.

I found the antagonist one-dimensional. The only thing he was missing was a cape and a mustache to twirl. I think the backstory explaining why he sought out people like Nell and Sophie was meant to flesh him out and make him sympathetic, but women dying to fuel a man’s pain-filled motivation don’t work for me in protagonists most of the time. It’s certainly not going to make me care for a villain.

While I thought the beginning held promise, The Murmurings just didn’t live up to my expectations. It had too many disparate horror elements mashed together, often times causing sudden tone shifts. If horror is meant to incite a feeling of dread, those tone shifts constantly disrupt that emotion. The cast of characters could also have been better developed. They could have walked straight off the set of a low-budget straight-to-DVD horror movie -– complete with 100% nonsensical decision-making skills. C