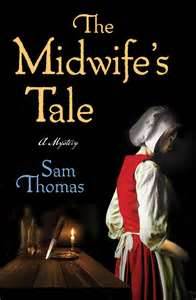 “It is 1644, and Parliament’s armies have risen against the King and laid siege to the city of York. Even as the city suffers at the rebels’ hands, midwife Bridget Hodgson becomes embroiled in a different sort of rebellion. One of Bridget’s friends, Esther Cooper, has been convicted of murdering her husband and sentenced to be burnt alive. Convinced that her friend is innocent, Bridget sets out to find the real killer.

Bridget joins forces with Martha Hawkins, a servant who’s far more skilled with a knife than any respectable woman ought to be. To save Esther from the stake, they must dodge rebel artillery, confront a murderous figure from Martha’s past, and capture a brutal killer who will stop at nothing to cover his tracks. The investigation takes Bridget and Martha from the homes of the city’s most powerful families to the alleyways of its poorest neighborhoods. As they delve into the life of Esther’s murdered husband, they discover that his ostentatious Puritanism hid a deeply sinister secret life, and that far too often tyranny and treason go hand in hand.”

While it’s lovely to see the 17th century utilized as a setting and I learned a lot about York and midwifery (is that the correct term?), I can’t say that this book got me much more than lukewarm as far as a mystery. I just couldn’t get caught up in the anger, tension and fear that I should have felt. Something about the relationship of the two main characters didn’t feel right to me either.

Other things in the book felt off to me as well.”Filled me in?” Is this period as it sounds far too modern a term especially when juxtaposed after a paragraph with the word “cozen” in it. Perhaps the intention was to make the book feel more accessible to a 21st century reader but at times the seeming difference in wording was jarring. I have a hard time believing that a relatively new servant to the household would so easily question her mistress about personal matters. A long time family retainer? – sure, such a relationship would lead itself to the servant bossing a family member about but even the event which “bonds” these two women doesn’t seem as if it would allow for this. Since care is taken to spell out the social differences between gentlefolk and their lessors and Bridget often uses this to gain an advantage while seeking the truth, it just seems odd for it to be almost discarded at times in her relationship with Martha.

I did learn a great deal about common feelings and beliefs of the times such as the importance of the “natural order” of King, lord, husband/master and then the lowly women and servants. Also of how important religion still was and not merely for the Parliamentarians. It’s not just the Roundheads doing the psalm singing. Unfortunately this interesting stuff is dragged down by

lots of pedantic “telling” and un-useful information – neat little facts but hardly relevant. For instance, did we need to know how many churches were in York or be given so many detailed directions through the city for the characters to take? If I wanted a history of the city, this would have been great but here it just made the narrative crawl. The political intrigue was just so much “blah, blah, blah.” This is one of the more pivotal eras in English history and I didn’t learn a thing. When I’m more interested in the midwife aspect than the murder or the potential reasons behind it, it’s a bad thing. Personally, I dislike the use of “later I would discover that” or “soon I would learn of” as a way to convey information in a first person book. It’s used a lot, I know, and getting this info across in other ways might not work as well or be as easy to write but I still dislike it.

Throughout the book, almost every case or event delved into by Bridget – either as a midwife or investigator – has to do with sex. Usually it’s masters raping their maidservants but one in particular made me sigh. One character is already established as a villain before it’s revealed that he’s also homosexual. I thought we were past using this as shorthand for an even more vile villain.

What I loved are the sections spent on Bridget as a midwife. I had no idea about their duties – both to their clients and to maintain public morality – or how formal a position it was then. The jealousy and determination with which the midwives guarded their knowledge and prerogatives was amazing and not a thing for the men to mess with. The idea of a bunch of gossips (friends) gathering to help with a birth, chat amongst themselves and get rip roaring drunk at a new father’s expense is hilarious but also touching. Fewer mothers and babies die with today’s modern medicine but I think we might have lost something along the way.

I finished the book feeling disappointed. Often the description of the action felt dry and distancing. It’s like the writing kept me at arms length and I was not engaged enough to wish to continue with the series. After the murder was solved, there was too much trying up of loose ends that felt anti-climactic. I appreciate the historical period you used and the fact that the main character is based on such an interesting historical person but this one gets a C from me.