REVIEW: The Lord of Wicked Intentions by Lorraine Heath

Fairytales often feature evil step-sisters, but rarely evil step-brothers. The latter are more common in romance novels–Prisoner of my Desire and A Kingdom of Dreams come to mind–especially in historical romance. The evil step-brother (he’s technically a half-brother) in your latest novel, The Lord of Wicked Intentions, is the greedy and immoral Earl of Wortham Within a week of their father’s death he has invited a group of men over for an evening of bidding on, ugh, his sibling, Evelyn Chambers. He’s assured his creepy pals his beautiful sister is a virgin and he’ll sell her to the highest bidder. Evelyn, who is indeed a violet-eyed virgin, doesn’t really understand what’s going on. She assumes the men are here to offer her marriage–she’s quite the innocent. 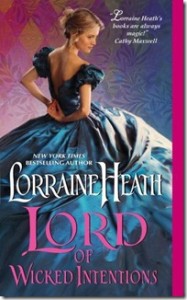 Rafe Easton has come to the auction because Evelyn’s brother, Earl of Wortham, owes him a ton of money the Earl gambled away at the tables in Rafe’s hell. Rafe has no interest in the auction; he’s there to “watch these lords make fools of themselves as they vied for the lady’s attention, to measure their weaknesses, and to discover means of exploiting them” and to make sure Wortham gets the money he needs to cover his debts to Rafe. However, surprising no one but himself, as the bidding begins, Rafe speaks up.

“I’m taking her.” Rafe could hardly countenance the words that burst from his mouth with such authority that Ekroth and Wortham stumbled in their tracks, while the other lords gaped at him. Obviously, he’d imbibed a bit more than he’d thought, but it didn’t matter now. The challenge had been spoken, and he never recanted his statements.

Standing, he tugged on his black brocade waistcoat that suddenly felt far too tight. “If any of you touch her, I shall separate from you the particular part that touched her. Wortham has assured us that she is pure. I don’t want her soiled by your sweaty hands or anything else. Have I made myself clear?”

“But you were only here to watch, to ascertain—” Wortham cut off his sentence and stepped nearer, lowering his voice, “—to ascertain my ability to cover my debt.”

“When have I ever confided my plans in you?”

“Then you’ll pay me the five hundred quid that Ekroth was willing to pony up?”

“I’ll allow you to continue to breathe. We’ll call it even, shall we?”

The next day, her brother takes Evelyn to Rafe’s palatial home and leaves her there without telling her she’s to serve as Rafe’s mistress. He tells her Rafe will explain “everything” to her. That night Rafe does.

“Your brother was seeking to find a man to take you as his mistress, not as his wife.”

She shook her head slightly as though she were almost frozen in disbelief, as though working out what he’d said was taking all her energy. “That can’t be. He promised Father that he would see that I was well taken care of.”

“Mistresses are often treated better than wives. At least I have no wife on the side, which is more than I can say for a few of the gents who were in attendance last night. As my mistress—”

“You can’t possibly want me to be your mistress. You don’t even like me.”

“I don’t have to like you to bed you. Truth be told, it’s better that there be no sentiment between us.”

Evelyn is shocked and runs out into the cold, wet night. Rafe retrieves her, talks her into being his mistress–she hasn’t any better options–and tells her he’ll give her a few days to get used to the idea before he takes her to bed. Oh, and she’s never allowed to put her arms around him.

I almost quit reading at this point. I disliked the premise, I disliked Evelyn, I disliked Rafe. However, I’d read the first two books in the series–this is the last–and I was somewhat curious about Rafe, the most mysterious of the three lost lords. The Lost Lords of Pembrook series tells the stories of three brothers who, years ago when their uncle murdered their father, were forced to run away. They spent ten years apart, each in rather horrific circumstances but have now returned to London and claimed their birthright. The other two brothers, Sebastian and Tristan, have found happiness and their families are close but Rafe has kept to himself and rarely even speaks with his brothers.

The Lord of Wicked Intentions did not turn out to be a terrible book. Nor is it a good book. It’s a reasonably well-written, inoffensive historical and, by its end, I no longer hated the protagonists.

Ms. Heath spends most of the book rehabilitating Rafe. From the moment Evelyn moves into his house, he begins to shed his emotional and psychological barriers. And it is he who works on himself. He’s not cured by Evelyn’s magic vagina though he does make her his mistress. (He waits more than just a few days to do so.) He desires Evelyn from the first night he sees her and that never changes. Part of his motivation for becoming a more open, connected person is to better seduce Evelyn. But he also realizes, as he interacts more with Evelyn, his brothers and their wives, he’s lonely. He is well on the way to becoming a changed man before he falls in love with Evelyn which I liked.

It’s a good thing Ms. Heath focused so on Rafe because he’s more interesting than Evelyn. She is a very typical historical heroine: a virgin who becomes a sensual lover overnight, a woman who loves a man she thinks will never love or marry her, a lady who is kind to everyone no matter their background. She’s also breathtakingly beautiful with tiny hands and feet and hair “a shade that rivaled the sun in brilliance.” Her choices, even her words, were predictable. I bought that Rafe loved her, but I sure didn’t.

Ms. Heath does write sex and sexual tension well. The love scenes in this book are hot and don’t impede the plot. The secondary story involving the previous owner of Rafe’s den also doesn’t hurt the book but nor does it add to it.

This is one of these books I suspect gets many of the historical details of the time wrong but for me there was nothing so glaring that it took me out of the story.

If you’ve enjoyed the other books in this series, I suggest that you read this one. It is the best of the three and does a nice job of wrapping up the stories of the lost lords. If you are looking for an inoffensive historical romance with good sex scenes, you’ll probably like this book too. If you don’t fall into either of these categories, I advise skipping this book. It’s just OK and there are better books out there. I give it a C.