I had such high hopes for this book, particularly when I realized it was a retelling of Beauty and the Beast inverted. The heroine, Catriona Cameron, was a beauty who enjoyed the pleasures of men, both in bed and out. She enjoyed toying with them. She enjoyed getting away with almost any kind of behavior. Catriona is in a horrific carriage accident that leaves her maimed and scarred. She retreats to her brother-in-laws Scottish estate, hiding in her bedroom suite, coming out to walk the private square at midnight. 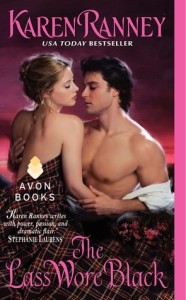 Mark Thorburn is the son and heir to a Scottish earldom. At Catriona’s Aunt Dina’s request, Mark comes to consult and see if he can cure Catriona. Aunt Dima is worried that Catriona is trying to kill herself by not eating. But Mark agrees to pose as a footman who oversees Catriona’s mealtimes. The two make a connection, mostly because Mark challenges her constantly.

Catriona learns to live with her own change of circumstances by accompanying Mark to Old Town, the slums of Edinburgh. The deepest characterization in the book is Old Town and the suffering and despair is palpable.

While reading this book, I constantly had to ask myself whether I would feel differently if the beast was a male rather than a female because Catriona was so difficult with which to sympathize.  Catriona is a true beast both in looks and temperament.  Her redemption, of sorts, comes through her realization that no matter how poor her circumstances are, they will never be as bad as what goes on in Old Town.  This transformation was far more believable than a beast made to feel beautiful through the love of another.  While Mark may have been somewhat of a catalyst by leading her to Old Town, Catriona made the internal transformation herself.

Contrary to many readers, I found Mark to be tiresome in his tireless devotion to his medicine. I think it is because the contrast between Mark the amazing and Catriona the horrible was too stark.  For Mark to be interesting to me, he had to be more nuanced.  Instead, he had no flaws. He was the wealthy son of a nobleman.  He treated all people the same, no matter the station.  He was tirelessly patient with Catriona and he was sexually attracted to her scarred and hideous body.  Despite all the abuse she hurled at his head, he was willing to return and he actually fell in love with her.

There are many interesting and different things in this book.  While Mark is an aristocrat, the setting of the book is far away from the glittering balls and music soirees.  There are longer separations in the book as Mark is off ministering to the needs of others.  Catriona as the beast and Mark as the beauty.   A strange suspense plot weaves itself through the book complete with villain points of view. I wasn’t sure exactly the point of the suspense plot other than to possibly drum up sympathy for Catriona (who was really challenging of a character).

When I finished the book, I felt like it was a book that I should have liked, but I didn’t. I found Catriona tedious and Mark bland. Mark’s sleeping with his obviously depressed and emotionally scarred patient was offputting rather than sexy. Ultimately, I felt the story lacked romance and I wasn’t convinced that Mark was the right man for Catriona. I wished, perhaps, she could have found someone after she had recovered emotionally and mentally from her scarring. C