REVIEW: The Lady Who Broke the Rules by Marguerite Kaye

While I’m afraid I’m getting burned out on traditional European historicals, I’m always looking for novels with a different setting or unusual characters, and this book certainly fit the bill. It’s set in Regency England and is part of Harlequin Historical’s Castonbury Park series; the hero is an American ex-slave and the heroine is a duke’s daughter. Numerous characters from other books in the series wander in and out of this installment, but it didn’t affect my comprehension of the main storyline or the characters’ backstories, and although I occasionally got a bit lost trying to keep the supporting cast straight, they weren’t integral to this plot. 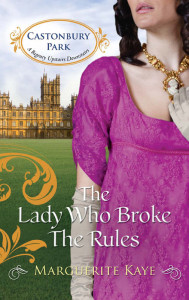 The Lady Who Broke the Rules is aptly titled, since the Lady in question is the heroine, Katharine Montague, who is the daughter of the Duke of Rothermere. At a party at the home of  Josiah Wedgwood (son of the famous potter of the same name), Lady Kate meets Virgil Jackson, an ex-slave who has become a wealthy businessman in Boston. Kate is something of an outcast herself because of her social ruin by her former fiancé, and she and Virgil hit it off immediately. Kate invites Virgil to come to Castonbury Park to see her model school, which is based on reformist principles and educates the tenants’ and villagers’ children. Virgil is reluctant, but he is very attracted to Kate and finds he can’t resist her offer.

That’s pretty much the plot. Virgil and Kate go back to Castonbury, where Kate’s family members are alternately indifferent, scandalized, or disapproving. There is a secondary storyline involving the heir to the Dukedom: Kate’s eldest brother is missing in Spain, but a woman who claims to be his wife has arrived at Castonbury with a child who is supposedly their son. Virgil carries out the last wishes of his late employer, the man who freed him and gave him the opportunities that allowed Virgil to become a rich and successful businessman in the United States.

The conflicts that keep the main characters apart are, not surprisingly, the social, cultural, and racial differences between them. Virgil may be rich and accepted in Boston society (more on that later), but he’s still a black ex-slave and outcast or not, Kate is the daughter of a wealthy and powerful duke. Virgil plans to return to America, Kate is English. And Kaye does not skirt around the obvious issues, although in this world Virgil’s color and race are less remarked than his economic status:

‘We are all staring, I know, and it is very rude of us, but I doubt any of us has ever met an African before, let alone one with such an impressive story to tell. Our fascination is surely quite natural. Is it so very different in Boston?’

Virgil Jackson shrugged. ‘Back home, it is not so much my colour as my success that makes people stare.’

‘Unless the ladies of Boston are blind one and all, I doubt very much it is that alone,’ Kate retorted. ‘You must be perfectly well aware that you are an exceptionally good-looking man. Why, even my friend Sarah is sending you languishing looks, and believe me, Sarah is not a woman who is prone to languishing.’

The romance is well done and the passion that Virgil and Kate feel for each other comes through clearly. Both the growing attraction and the scenes in which they give in to that attraction are compelling and believable. If I could have suspended disbelief about the premise and the behavior of the various characters, I would have enjoyed this novel quite a bit. But I kept getting pulled out of the romantic story by the implausibilities.

There is an author’s note at the end of the book that makes it evident that Kaye thought seriously about the difficulties of writing a credible romance between a black American and an aristocratic English woman, and she clearly did a fair amount of research. But as an American reader familiar with slavery, race and color-line issues in US history, I couldn’t easily accept the choices Kaye made.

First, Virgil’s backstory made his escape from slavery and subsequent success hard for me to believe. He led a slave rebellion on his master’s plantation in Virginia. The master is clearly a villainous character, but rather than hanging Virgil (as actually happened to a slave who did the same thing in the same state a few years earlier), he sold him to a northerner who then set him free, gave him a job, and then bequeathed to him a flourishing business. Is it possible? Anything is possible. Is it plausible? Not even a little bit. Whites in slave states were continually worried about slave rebellions and insurrections, and the separation of relatives and the discouragement of marriage were key practices in limiting such opportunities (as were the swift and brutal punishments of those who engaged in resistance).

Second, as the excerpt above illustrates, Virgil is welcomed into elite, white, Boston society. Had this been Philadelphia or New York, I might have accepted it, but Boston? Boston was not exactly a bastion of interracial egalitarianism in the late 18th and early 19th centuries. Yes, there were definitely successful free black citizens living there, but they didn’t mingle freely in upper-class white society. They were successful in a parallel black world, for the most part. (Kaye writes that she modeled Virgil on a successful mixed-race businessman, but that man lived in Philadelphia and was three-quarters white.)

Moreover, miscegenation was illegal in Massachusetts during this period, so while Virgil and Kate’s marriage would have been officially recognized because it was legal where it took place, it most likely would have caused them considerable difficulties once they returned to Boston. I’m not doubting that a free black man could have become prosperous and successful in the north. But for an insurgent slave to escape death, be taken north and freed, and then integrated into white, New England, upper-class society, all before the War of 1812 was over, requires an enormous suspension of disbelief.

Third, the general acceptance of Kate’s relatives, first of Virgil’s visit and then of their romance, was difficult to believe. Yes, there were fervent abolitionists in England during this period (including Sarah Wedgwood, who appears briefly in the novel), but even many of those who wanted to improve conditions for blacks and other colonial populations didn’t see them as equals. For many abolitionists, the ideology of abolitionism stemmed from a belief that it violated their own Christian tenets and was not motivated by egalitarian ideals. The dominant ideology of this era strongly reinforced the concept of different and unequal races, and color differences were explained in racial terms, but race is rarely mentioned in the book.

And finally, much of Virgil’s reluctance to fall in love with Kate and build a future for her turns on the loss of his previous love, Millie, a fellow slave in Virginia. Virgil holds himself responsible for Millie’s death and must come to terms with this for the HEA to occur. I found the depiction of Millie and the whole storyline disturbing, because it reduced her experience to a plot point and made her a cipher. This isn’t uncommon in romance novels; the past loves have to be erased and neutralized for the hero and heroine to have a clear, unambiguous happy ending. But somehow, neutralizing the deep and abiding love between Virgil and Millie (which Kaye depicts very convincingly) felt like a more problematic act of erasure.

Despite the author’s obvious effort to research the period, I couldn’t believe in the romance and the implausibility of the hero’s story was too much for me. Worse, it also felt appropriative. I could have more easily accepted a romance between a former slave and an aristocrat if the class positions had been more authentic. For example, had Virgil accompanied his Boston employer to England and met Kate and they had fallen in love, that I could see. But a slave hero who is wearing Weston-cut jackets a decade after being enslaved on a plantation and blending seamlessly into elite English and American society doesn’t just strain credulity; it erases the real experiences and courage of the free and enslaved blacks of that time.

This is a tough novel for me to grade. I had major issues with the way race and slavery were depicted, but the romance story is engaging and the characters are appealing as individuals.

→ Sunita
Previous article: Thursday News: I’m running away to join the circus (and the indie bookstores who are suing Amazon should come with me)
Next Post: REVIEW: Rinaldi’s Revenge by Paula Marshall