This book came highly recommended from Reader Shana. It is a fantasy story set in some land with detailed and intricate world building. What’s even better is that there is a strong romance underpinning to the story. Unfortunately, I am not the right type of reader for this book. I find this to be true for most of my reactions to fantasy stories. I like things to happen in my books and this book is more about building the world than providing any forward movement.  I’m convinced that this is an “it’s not you, it’s me” function. I can’t even judge it properly because as a fantasy story, it might suit readers wonderfully but very little of the story worked for me. 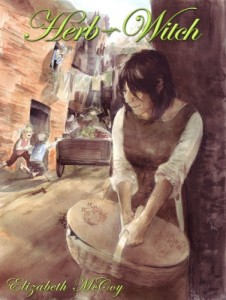 Kessa Herbsman is a half barbarian herbalist in a horse and carriage. She ekes out a small living selling herbal cures to the lower classes.  Her hair is dark and her eyes are so strange that she cannot look anyone in the eye without them recoiling.  Her family are the other children with whom she was raised in a creche.  Laita, the frail but beautiful girl who sells herself; Jontho, Burk, and Tag.  Most of her money and efforts go toward feeding and trying to cure Laita of whatever ailment she may have.

Kessa is arrested and accused of mixing a potion that resulted in a local moneylender going mad.  When the Lord Alchemist, head of her guild and current ruler and minor baron, comes to administer a truth potion, he discovers she is immune and immediately proposes.

Even more softly, he said, “You’ve an alchemist’s immunity.”

As if he spoke of the weather, he added, “That’s a proposal.”

Ianthor proposes because he wishes for an immune son.  In the land where they live, individuals of lower castes are required to imbibe a draught.  The loyalty potion, known as the dramsman’s drought, binds the drinker to the first person that is seen after the draught is taken.  A person with an immunity to all achelmic potions is rare. Only Ianthor and his brother, Iasen, are known to have it and only an immune can be the Lord Alchemist.  Currently Iasen is Ianthor’s heir and Iasen purportedly does not want this position, choosing to squander his life and skill.  Ianthor is the opposite. He is steady and feels his responsibilities keenly.  He does not like loyalty potions and helped to develop a new one that gives the drinker more latitude.  He is careful not to order his dramsman but instead provides suggestions and renders requests so that the people that serve him do so out of their own free will.  He is a true romantic because he wants an immune wife, not just to have an immune son, but to have a wife that loves him and that is not bound to him by some potion.

And Iasen asks why I don’t just pick some girl with tolerances. Bad enough there’s need for my servants to be dramsmen, sacrosanct from threats because nothing can break their loyalty. But to make a dramswife to share my life and bed, and never again know if her agreements were true or potion-wrought?

Kessa is afraid and angered by this proposal and unfortunately her response was the biggest problem in this book. I never understood Kessa’s extreme fear of Ianthor, the Lord Alchemist. There is no question that his proposal was boorish (not to mention incomprehensible for this reader) but the fear and mistrust she exhibited seemed extreme in comparison to Ianthor’s behavior. The book drags on as Kessa first rejects the proposal but also rejects Ianthor’s offer to teach her alchemy.  She knows only herb witchery.  She views him so suspiciously that he cannot provide her with food or a blanket without Kessa believing that she is in mortal danger from him.  There is some suspicion that Ianthor might be visiting a couple of the more seedy brothels in town but there just wasn’t anything dangerous or unlikeable about Ianthor.

Kessa is described as half barbarian.  She is often looking at people through her curtain of hair.  Her eyes were apparently so horrible that no one could bear to look at them without flinching.  I did not understand why her eyes caused such an extreme reaction. They were described as a mixture of vomit and dung, but unless they were red, burning alien orbs, I needed some better explanation why the people of her land were so taken aback by the sight of them.

What I found ironic is that while there are no initial info dumps, the story gives half looks and allusions to what might be going on for several chapters and then we are treated to longish monologuing info dumps to explain what was alluded to in the five previous chapters. I found this incredibly frustrating because I was reading so slowly to try to comprehend the world only to have the characters blurt out what took five chapters to explain.

I also wondered about the racial implications of this book. Kessa is described as dark skinned, dark coarse hair, and dark eyes; yet on the cover is like a dark haired white girl.

The setup is quite interesting.  A man wants an immune free woman. She is distrustful of him. In the meantime, she hides something from him which makes him suspicious.  The conflict that made sense was that Kessa did not want to be with a man who wanted just because she was immune, but given Kessa’s current situation: her poverty, her family’s need for help, and her desire to learn alchemy, the protracted distance between the two was tiresome.  Further, Kessa jumps to negative conclusions non stop.  If anything negative ever happened to her, it was invariably Ianthor’s fault.

Finally, there seemed to be some strange affection for Kessa’s “moon’s blood.”  Nine chapters in, we are introduced to Kessa’s “dried maiden’s blood” which is kept in a bowl in her shop.  At chapter 25 (which is about 50% into the book) Ianthor arrives at Kessa’s shop only to find Kessa sickening.  Quickly he discovers Kessa is suffering from “moon-brought bleeding” based on the smell of her blood and vomit in the air.  We learn that Kessa collects her maiden’s blood and dries it out to make a contraceptive that she sells:

Maiden’s blood – traditionally moon-blood – preserved with boiled brine-salt and flaxseed oil, dried to black and cracking flakes and ground to powder with laceburrs. The result was used to smoke tea leaves, mint leaves, or rose petals. Dry tea, that women drank to keep from conceiving. Add cotton seeds instead of laceburrs, and it was men’s tea, blighting the seed for two or three days after a single strong-brewed cup.

In the glossary, apparently this contraceptive can be made from a cut but Kessa collects her blood the traditional way. In a bowl.  At one point, the added description is given of Kessa’s legs being numb from crouching over her collection bowl.  The arc regarding Kessa’s moon’s blood continues throughout the book:

Sitting back down would be good, for her belly still ached and she was already angry that their truce was going to break – but sitting on cotton padding was lumpy and she sometimes worried that it might be enough to reduce her blood’s purity.

What was with all the references to the maiden’s blood and the curative created from it? While Kessa’s status as a maiden was briefly brought into issue, it wasn’t an important plot point and neither was the issue of contraceptive.  The non stop references to Kessa’s menstruation cycle seemed bizarre.  The ending of this book is a bit of a cliffhanger and I started with Herb Wife, the sequel.  Sure enough, the second paragraph refers to Kessa’s moon’s blood. It seemed like the longest period ever.  I haven’t decided whether I will read the Herb Wife but I’m leaning toward  ‘not for a while.’   C