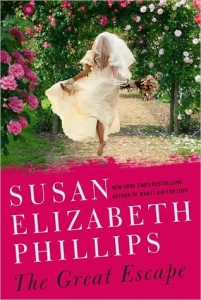 The Great Escape is Lucy Jorik’s story. Ms. Phillips fans first met Lucy in First Lady as the daughter of future president (and unbelievable heroine) Cornelia Case. Lucy grew up in the White House, always in the public eye, and, when last seen in the irritating Call Me Irresistible, she’d bailed moments before she was to marry one of my least favorite SEP heroes, practically perfect in every way, Teddy Beaudine. Prior to The Great Escape, readers knew Lucy was one time-zone away from Texas but had no idea where she’d gone.

Now we do and, frankly, it’s lame.

After Lucy ran out of the church, clad in an “exquisite French bra, her lacy bridal panties, blue garter, and white satin stilettos” and a choir robe (she’d ripped off her headpiece, gown, and veil and dumped them in the vestry), she met a man on a motorcycle.

The motor idled as he took his time studying her. One black boot hit the gravel. “S’up?” he said over the engine noise.

He had too-long black hair that curled pat his collar, cold blue eyes set above high cheekbones, and sadistic lips. After so many years of Secret Service protection, she’d grown used to taking her safety for granted, but she didn’t feel safe now, and the fact that she dimly remembered the biker as a guest at last night’s rehearsal dinner–one of Ted’s odd assortment of friends–didn’t exactly reassure her. Even semi-cleaned up in a dark suit that didn’t fit well, a rumpled white shirt open at the collar, and motorcycle boots that appeared to have received nothing more than a dusting, he didn’t look like anybody she wanted to meet in an alley….

He jerked his head toward the rear of his bike. “Wanna go for a ride?”

Doggedly good girl Lucy gets on the bike, robe riding up her thighs, and heads out to experience the big bad Secret-Service-free world.

None of this is remotely believable. That’s not so bothersome, however. Ms. Phillips’s works exist in a parallel world where the realities that limit ours–government agents that can’t be escaped by a President’s daughter in stilettos, voters who have yet to elect a young female president, poverty that isn’t really poor, tigers that telepathically communicate with girls named Daisy–hold no sway. She writes that world unapologetically and, especially when it’s set around a mythical Chicago football team, it’s entertaining. (It Had to Be You, Natural Born Charmer, Dream a Little Dream, This Heart of Mine, and the non-Stars based Kiss an Angel = good banana pudding).

No, what’s bothersome is how uninteresting it is, how petty Lucy’s efforts to find herself are. Lucy leaves Ted, her family, her best friend Meg, and their expectations at the altar. She rejects the limiting life she’s had growing up in the public eye. What does she do with this freedom she’s finally grabbed for herself?

She gets picked up by a taciturn guy named Panda riding a bike that bears this bumper sticker: GAS, GRASS, OR ASS. NOBODY RIDES FOR FREE. He wheels her away, acting like a lout, to days of crappy fast food and chaste nights in low rent rooms. Lucy doesn’t have money or a cell phone, so she uses his. She hides behind his badass swagger; no one notices her in the dives they frequent, they’re all too twitchy with fear of and/or desire for Panda. Lucy tells herself she’s working on her bad biker babe skills. She renames herself Viper, practices sneering, and spends her days thinking up surly girl repartee to impress Panda.

This goes on, rather incomprehensibly for two Secret Service free weeks and 67 pages. Then, in short order, Lucy and Panda have Dairy Queen described sex (“Flurry. Quake. Flood.”), Panda dumps Lucy, explains what he’s really been doing with her, and Lucy runs away again, this time to a picturesque island in the Great Lakes where she thinks Panda regularly goes (she found a ferry pass in his pocket.)

At this point, the novel becomes not about escape, but about finding the holy grail of fictional bliss: a safe harbor. (I’m convinced Ms. Phillips planned to call this book Safe Harbor for both the phrase and the concept appear frequently.)

Lucy, who has disguised herself to look like, yes, a biker girl complete with dreads, too tight tank tops, black combat books, and press-on tattoos, arrives via ferry to Charity Island, in Saginaw Bay. (The island really exists. It’s in Michigan waters of Lake Huron.) There, she lies to a couple of chatty locals who tell her that “a dude named Panda” “bought the old Remington place out on Goose Cove” a couple of years ago. Lucy heads to the empty house, breaks in (Viper, the girl with the fake dragon tattoo, strikes again!), and, after returning her rental car back to the mainland, buys some groceries, and begins living there.

She settles in, scours and rearranges Panda’s vacation (?) home, and tries to write her part of her famous mother’s biography which she’s utterly unable to do. After a week of this, Panda appears and he and Lucy begin again. He tells her his real name, where he lives (most of the time), and tells her to go home. She doesn’t. He agrees, after some Viper applied guilt about the sex they had, to let Lucy stay for a month, rent-free, in his house. He won’t be there, he says. He’s got a job to do elsewhere.

Up until this point in the novel, I’d found nothing to hold my interest. Lucy annoyed me with her posturing, Panda’s “I’m pretending to be a big jerk” schtick grated. In the second two-thirds of the book, Panda’s and Lucy’s exasperating relationship became one of several story lines. The book leaves contemporary romance behind and moves into the hazy realm of women’s fiction. Furthermore, although she does it in ways that leave her vulnerable to accusations of tokenism and misinterpretation of young black males, closeted lesbians, and veterans with PTSD, Ms. Phillips expands her cast of characters beyond the white and witty.

I liked the descriptions of life on Charity Island. The island has a small year-round population and Ms. Phillips shows the life behind the fruit stands. At times, her writing is lovely. Whether describing the bees kept by Bree, the depressed divorcee whose family once owned Panda’s house, or showing the ease with which teen tourists wreak havoc, the prose in this part of the novel is strong and occasionally moving. Her familiar themes of family and community are well-done. If I had to articulate the ethos of Ms. Phillip’s Charity Island, it would be it takes a village to raise us all, a village made of all kinds. There is a vague hectoring sense to this novel, but it didn’t distress me. In The Great Escape, kindness, charity, tolerance, and acceptance are all trumpeted. It’s done with a somewhat awkward horn, but I appreciated the message nonetheless.

Sadly, the end of the novel is, in all sorts of ways, the pits. The focus returns to Panda and Lucy the latter of whom opts for icky shenanigans in order to win Panda… which he is fine with. There’s a spouse/spawn epilogue as treacley as any I’ve encountered. If I could burn books–I can’t, I’m the daughter of a librarian–the last twenty pages of this book would be toast.

P.S. Here’s a recipe for my favorite banana pudding.