REVIEW: The Girl’s Guide to Getting Hitched by Sophie Hart 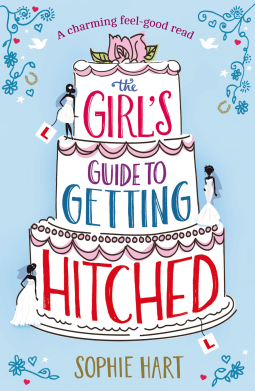 Rule number one: Keep calm and marry on…

When new mum and events planner Julia Crawford is given the opportunity to plan three weddings, she jumps at the chance. What could possibly go wrong? …

Forget bridezilla, Aimee’s future mother-in-law is the stuff of nightmares – hell bent on taking over the wedding entirely. Worse still, her fiancé, Jon, seems oblivious. Aimee’s starting to wonder if she and her groom-to-be are right for each other after all…

Body shy Debbie is on a mission. She’s determined to shed a lot of pounds before the big day. As the wedding inches closer, will the new Debbie lose sight of what’s really important?

Gill loves Mike and their blended family of five kids to bits, but with a house full of teenage hormones and her eldest, Kelly, struggling with so much change, Gill is feeling the pressure…

As the women bond over cake and a cuppa, can they each resolve their wedding woes before the big day?

This sounded like a sweet, summer read. I’m always up for a British book – it’s so much fun to note the linguistic differences and learn new slang – so when I saw it listed at netgalley, I put in a request. I was right in that it’s a nice book but it never quite got beyond that.

Since there are four couples to learn about, the intro sections were all about setting up who is who, engaged to who, what the woman’s issues are and how all of them are finally going to meet. Julia’s been out of the job loop for months after her son’s birth and is anxious about childcare and not losing her professional touch. Debbie is determined to work off her excess weight and look svelte for the big day, Gill is trying to blend a family with her fiancé and Aimee has a frighteningly posh future mother-in-law who criticizes her every decision.

All of the brides and Julia are people who sound and act like people I know. I can understand their concerns and worries. They are Every Woman. The book definitely has a “feel good” tone. The conflicts aren’t hard to figure out and are spaced at regular intervals. They also aren’t hard to sort, seem smoothed over fairly easily and don’t last too long. The four couples’ stories are interwoven and no one gets skipped over but it all began to feel like some TV dramedy complete with scripted dialog and a resolved issue before the hour is out. There was also a lot of seemingly unneeded description of what bit characters were wearing. I did like Debbie’s realization as she walked down the aisle and the fun reception Gill’s children set up for her.

This is a perfectly nice book. It’s filled with nice people going through wedding hoopla on their way to their nice HEAs. The conflicts are nicely set up, nicely spaced out and nicely resolved. Everyone gets what they deserve. It’s all very tidy, very neat and fairly obvious how things will work out. There’s nothing wrong with that but it’s not riveting or angsty or overly emotional. It’s nice. I can’t fault it for that but neither did the story get me involved and hanging on the next page flip to discover what would happen next. I finished it feeling good but I doubt the story will stick with me long. C

→ Jayne
Previous article: Friday News: debut novels, anti-privacy regulations, thoughts on the confederate flag, and “letters” to an editor
Next Post: Reading List by Jennie for April, May and June