The title of your novel caught my eye right away. It’s catchy and I admit the idea of an afterlife detective agency was interesting. The reality, however, was a bit more cute than I think I was expecting. 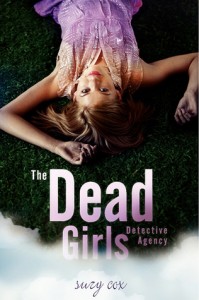 Charlotte is just your average NYC private high school student. She was just minding her business, going home one day, when someone pushes her off the subway platform and into the path of an oncoming train. Not the prettiest way to die, no.

Next thing Charlotte knows, she’s in an afterlife hotel where the ghosts of murdered NYC teenagers congregate. It’s basically limbo, and Charlotte will be stuck here until she can solve her own murder. And it will have to be her – given the circumstances of her death, it was ruled a suicide by the police and the case was closed. So if she doesn’t do it, no one will.

I didn’t go into this novel with any expectations but upon finishing it, I was left a little unsatisfied. I think I wanted something a little grittier and more thriller-like. I guess when you have ghosts who died via violent methods like subway train, explosion, or gunshot, I don’t expect such a light tone.

It might simply be a mismatch. The tone is lighter than I would have liked, but on the other hand I know many readers would love that sort of thing. I’ll be the first reader to admit that all the dark, emo books are a little wearying. There’s a similarity in tone to the earlier works of Meg Cabot, in my opinion, so fans of hers may like this one.

I found the story to be a little predictable. Charlotte’s beloved boyfriend in life turns out to be an a-hole once she’s gone. The cheerleaders at her high school are classic mean girls who sleep around. There’s a bad boy ghost who she’s attracted to, even though she shouldn’t be. Her two new best friends in the afterlife are the classic cliches: the smart, serious one and the ditzy, fashion-obsessed one. There’s nothing new here.

I suppose you could say there’s a “twist” ending after the mystery of Charlotte’s murder is resolved but it seems almost tacked on because there was no lead up. I realize Tess’s behavior could be interpreted as one big hint but as there was nothing to flesh out her personality and the reasons behind it prior, it came off as random. And of course there’s the minor detail that the one girl who’s been mean to Charlotte the entire time is the one who’s ready to betray her. How surprising. Like I said, the narrative plays the plot very straight with little subversion.

The Dead Girl’s Detective Agency is a very quick read. It doesn’t really challenge you or surprise you, and I can see how people could like that. But in the end, I prefer novels that try something new. C