When I was growing up, I always got these annoying reports cards that said “Dabney could try harder.” Well, Ms Higgans, so can you. The Best Man isn’t an awful book–in fact I had fun reading it.But this novel has far too many pitfalls. It’s condescending to gays, full of unbelievable emotional choices, overly wedded–pun intended–to the excessive elevation of marriage as the goal of true love, and shamelessly milks the pain a child feels at a parent’s death. (Don’t even get me started on the cheap shot it takes at transexuals everywhere.) It also comes across as a bit sloppy–it contradicts itself, drops major plotlines, and its characters veer from persona to persona. Honestly, I wish I’d hated The Best Man on principle alone. 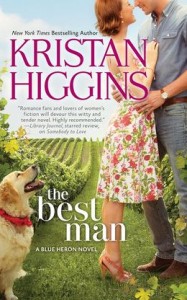 But I didn’t. I found parts of it so amusing that the part of me that just wants to laugh and have mindless fun really liked this book. Reading it made me feel bi-polar.

In The Best Man, our just about a virgin heroine, Faith Holland, still hasn’t recovered from finding out on her wedding day that her long time beau Jeremy was gay. It was kinda news to Jeremy too. He’d been so sure he couldn’t be gay although whenever he and Faith had the rare sex they did he had to imagine Justin Timberlake doing his thing in his killer music video “Rock Your Body.” (I didn’t find this funny.) The one person who was sure Jeremy is gay is his unlikely best friend, Levi Cooper. Levi, Faith and Jeremy have all known each other since high school and since the moment Levi met Jeremy he thought “Gay.” Levi had tried for years to get Jeremy to come out of closet, but Jeremy just couldn’t until, on Jeremy’s wedding day, as he’s standing at the altar with Faith, Levi pushes the issue. Jeremy dumps Faith, and, years later, Faith still hasn’t had a relationship with another man.

The day Jeremy dumped her, Faith fled to San Francisco, leaving behind the picturesque New York town of Manningsport. There, Faith picks unsuitable man after unsuitable man. Two are gay–one with a Barbra poster–, one’s a dealer, one’s married, and Faith who is remarkably inept at searching the internet, gets just enough involved with each guy to realize she’s yet again made a poor choice.

Faith has just wrapped up a disastrous date when her sister Honor calls and tells Faith she needs to come home stat because their long widowed father is being bamboozled by a big boobed, tackily dressed gold digger named Lorena. So, Faith returns to Manningsport which is, for a tiny town, a hopping’ place. There’s Faith’s family, the Hollands–most of what I found funny in the book centered on their stories–, Levi who is now the chief of police, Levi’s sister Sarah, Levi’s ex-girlfriend Jessica, Faith’s best friend Colleen, Jeremy, and a bunch of cute other small town folk.

And though it’s been almost four years since Faith’s non-wedding, it’s still an exceedingly popular topic of conversation. Everyone discusses Faith and Jeremy and, man does it get dull. I wanted to town and Faith to have moved on years ago. YOLO dudes!

There are so many plot lines going on in this book that to cover even the major ones would require even more verbiage than even I can generate. So, I’ll focus on three main ones: Faith’s mother’s death and Faith’s guilt about having caused it, Faith’s and Levi’s long simmering jones for each other, and, by far my favorite, Faith’s oldest sister Prudence’s relationship with her husband Carl.

The first plot line is awful. Faith has epilepsy–I give Ms. Higgans a few brownie points for that–and, when she was twelve, her mother and Faith were in a terrible car crash, her mom died and Faith blames herself. I hated everything about this story including the resolution. It was sappy, manipulative, unbelievable and just bad.

The second plot line–the romance–has its moments. Levi and Faith are an opposites attract couple and Ms. Higgans does a reasonable job of making their interest in each other seem believable. The two share many funny moments and the attraction between them is palpable. I liked their chemistry although Levi is portrayed as such an utter hottie it’s a little hard to see why a) Faith never fell for hotties before but has now and b) why Levi is so attracted to her (I think a lot of it is her “great rack” which is mentioned incessantly.) I liked their story until it got crazy in the last quarter of the book. Sadly, by the time Faith and Levi found their HEA in a frozen wine orchard in the middle of the night, I wanted Levi to end up with his old girl-friend Jessica who seemed so much less absurd work than Faith.

The third plot line cracked me up. Pru and Carl married young and now have a 22-year-old son and an 18-year-old daughter. They love each other but lately Carl is driving Pru batty with his constant efforts to spice up their marriage. (Dress up like a Vulcan, baby. It makes me hot!) Their relationship felt so real to me but perhaps I was projecting. I will say the funniest lines I’ve read in a book in a long time come about when Pru is trying to sext Carl about what color panties she’s wearing. It’s making me laugh again right now.

These three stories are mixed in with so many other relationships, rivalries, childhoods, descriptions of wines, really, the list goes on and on. Many of these stories are either t00 minimally explored–Jeremy’s relational life post-Faith–or dropped completely–Honor’s New York man. The book churns out emotions, drama, tragedy, and giggles at a breakneck pace. It is, I admit, entertaining. It is not, however, well-done.

The Best Man isn’t a very good book. With editing, less condescension, and far less contrivance, it could have been a pretty good book. As it is, I give it a C.

Still smiling, though, about that awkward text,

→ Dabney
Previous article: The Politics of Dancing
Next Post: REVIEW: Lord of Darkness by Elizabeth Hoyt