REVIEW: The Ballad of Emma O’Toole by Elizabeth Lane 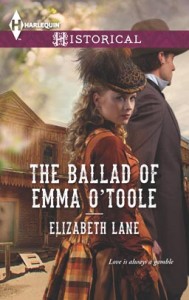 I hadn’t read a western in a while so the blurb for this one caught my eye.

After shooting a man, the stakes for gambler Logan Devereaux have never been higher. On trial for his life, he’s offered a shocking alternate form of restitution…marriage to his victim’s pregnant sweetheart!

Beautiful Emma O’Toole has sworn vengeance against him—and when a newspaper man puts her tragic story to song, the whole nation waits to see what she’ll do. Their marriage is the riskiest gamble Logan’s ever taken. But he’ll put everything he’s got on the line for a chance at winning Emma’s heart.

This set up, plus my luck with several of your other books, got me to put this one in my TBR queue and to move it to the top fairly quickly. I enjoyed reading a western again but somehow this story just never quite took flight.

Forced marriage of convenience, sworn vengeance, enemies-to-lovers, blackmail, muckraking crusade for social justice – the book had several plotlines that could have been twisted together for a bang up story. But despite the potential, each one sort of drifted along, never quite reached a crescendo of emotion and then got resolved. Sort of like being taken down a swift river with some blind curves but no real plunging, waterfall payoff that got my heart racing.

Emma is faced with social ruination from an unwed pregnancy after her fiancé is killed but the quick marriage and her husband’s money smooths that over and soon the townsfolk seem to forget. Logan is jailed and tried for Billy John’s murder but a smart lawyer and a Mormon judge set on saving those he considers sinners get a lesser conviction and force the quick marriage after which no one seems to remember the crime Logan was found guilty of. Even Emma drifts along with the marriage for months before remembering she swore to avenge her dead lover.

Mining conditions take up a great deal of the next portion of the book. I learned a lot about the dangers of mining then as well as the difficulties of making mines profitable. It was all interesting but not what I’d call riveting and not what I wanted instead of romance. Emma thinks she has a way of getting Logan to pay for what he did but that doesn’t work out as she thought it would though it does bring them to a point in their marriage where they begin being more honest with each other. I’ll give the book points for that though soon it sinks into a bit of melodrama before quickly moving on past that as well.

The villain of the story remains the villain until the end with only a cursory explanation for his motives. Emma and Logan band together to see to his end and finally confess all to each other thus clearing the way for their future but the epilogue is required to neatly, almost too neatly, tie up all the loose ends and send the two lovers off into a rosy sunset. Perhaps there just isn’t enough word count space these days but I feel that this book could have, and in the past would have, been so much more. Now though it just felt superficial and too rushed as the points were more skimmed over than delved into. C