I’m a fan of westerns and though that subgenre is making a bit of a comeback as a romance setting, pickings are still slim. It does appear to be a favorite choice of setting for inspies and that is what lead me to read book one in the Texas Boardinghouse Brides series, “The Anonymous Bride.”

Luke and Rachel had grown up together and were a couple people just knew would end up together. And indeed they were planning their wedding when Rachel stunned Luke with the news that she’d quickly married James Hamilton, son of the wealthiest people in town. Gobsmacked and heartbroken, Luke quickly leaves the small Texas town of Lookout and after joining the army, spends 11 years on the western frontier. 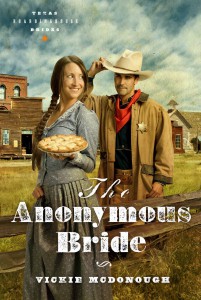 Now he’s ready to settle down and stop living out of the saddle. Drawn back home, he accepts the job of town Marshall and almost immediately runs into Rachel and her daughter Jacqueline, or Jack as the young tomboy prefers to be called. Luke’s cousins Garrett and Mark quickly inform Luke that Rachel is now a widow but when Luke denies any interest in her, they cook up a scheme to find him a wife: answering ads for 5 mail-order brides in Luke’s name, figuring that only one of the women would probably actually show up.

The whole town, Luke included, is stunned when 3 women arrive announcing their intentions of marrying him. Since none of the brides will give up her claim, the mayor decides to have a contest with the winner to become Luke’s wife. But Luke has never forgotten Rachel nor she him. Afraid that she’ll miss her second chance to marry the man she still loves, Rachel decides to enter the contest as the Anonymous Bride. Do these two have a chance to find happiness after all?

I thought the story got off to a slow start with tons of backstory to tell about most of the characters and the town but since you’re setting up a series, I kind of expected that. Still, tighter editing would have moved things along. Scenes tended to drag out too long and include extraneous details which didn’t add anything other than length.

Jack is an interesting character as a girl ahead of her time or maybe a girl who wouldn’t be understood and accepted in her time. She wants to do the fun things the boys can do and is a rebel but she’s got strength which makes sense given the background you’ve invented for her. She also learns how hard and painful it is when your nearest and dearest don’t believe you. Perhaps she’s learned her lesson about lying and will at least be honest about her school skipping from now on. I do like how her friends Ricky and Jonesy come to her aid when it’s needed. I’ll give bonus points for the progressing relationship between Rachel and her daughter as each gives and takes a little, now that Rachel knows Jack doesn’t always lie.

Since Luke and Rachel are still in love, the main conflict between them boils down to can they get over what happened in the past and start fresh. You seem to be sticking to mores of the time when Rachel would have lost her reputation if what had happened was known and I can see how she would feel that she was partly, at least, to blame. Then after learning what happened, Luke begins to blame himself – no, really insisting! – that it’s his fault. Usually it’s the heroine who’s Little Miss Martyr in romances but for a while it seemed Luke was about to get out his hairshirt. Yet I do like that once he knows the truth, he doesn’t blame Rachel for what happened.

I like that Rachel decides to do something to try and salvage her relationship with Luke instead of just sitting back and doing nothing. Also that when Ty shows up, Rachel doesn’t try any heroics to turn the tables on him or try to make a break for it since she knows Ty could hurt the others in the house. It wouldn’t make sense for her to suddenly act like Wonder Woman. After she’s taken prisoner, she again is proactive about getting free.

Mark and Garrett irritate me. They do play with these women’s’ lives but seem to show almost no remorse or sense of responsibility. They were the ones to make false promises to the brides yet it’s Luke who gets roped into paying the bill. Then he has to *keep* reminding those yahoos of what they’ve done and usually all they can do is grin and smirk. I realize that the two remaining brides will probably end up with those two and honestly, I pity the girls.

Most of the religious aspects of the book are worked into the story well and make sense for a more openly religious time in our history. There are two intensely religious scenes – when Luke talks with the minister about forgiveness and the end as Rachel proselytizes to Carly and convinces her of her worth and to be saved. Given that the main theme of the book is forgiveness of past wrongs, both of others and of self, I thought these scenes were appropriate. One thing I do like is that Rachel dismisses her too quick thought that God is punishing her for what James did to her by having Luke’s hand in marriage up for grabs by these other women.

“The Anonymous Bride” is a pleasant way to spend reading time. Though I enjoyed watching Rachel and Luke find their second happiness and Rachel and Jack move towards a better understanding of each other, I doubt I will continue with the series. Mark and Garrett are obviously future heroes and neither of them interest me. C

This is one of the few times that I have seen a nook version and no Kindle version.

→ Jayne
Previous article: First Page: Contemporary
Next Post: Dear Jane: How do I check out electronic books from the library?