REVIEW: The 100 Society by Carla Spradbery 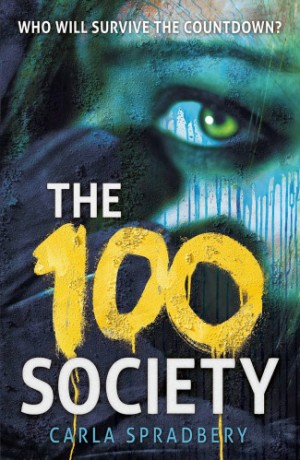 I’m really into YA thrillers as of late. Whether this is a result of my general boredom with YA fantasies these days or a callback to my teenaged love of Christopher Pike, I don’t know. But I can’t seem to get enough of them right now. Your novel, The 100 Society sounded interesting so I thought I’d give it a try.

An art student at a British private school, Grace has one goal. To tag 100 locations around the city, thereby joining “The 100 society”. Graffiti is a type of art, after all. But 100 tags is a lot to do by yourself so Grace has recruited some friends to help her: her friend, Faith; pretty girl Cassie; Cassie’s boyfriend, Ed; her best friend who wants to be more, Pete; and bad boy, Trick.

Unfortunately, the closer Grace gets to 100 tags, the more it becomes apparent there’s a stalker — the Reaper — who doesn’t want her to succeed. And as the threats escalate, Grace and her friends face increasing danger, and the added stress reveals fault lines in their relationships. Not the best thing to happen in this situation. But even worse is the truth: the Reaper might be someone they know.

I had a strange experience reading this book. I didn’t connect at all with any of the characters. I found them superficial and 2D. At times they just downright annoyed me. And anyone who knows me knows that I like to read for characters. But despite this lack, I could not stop reading! I had to know what was going to happen next! What is this black magic?

Some people would claim there is a love triangle here. I wouldn’t actually describe what happens in the book as a love triangle. Grace is into Trick. (Trick is short for Patrick. I know. I know.) Trick is into Grace. Pete is into Grace. But Grace only likes him as a friend. That’s not a love triangle. There is one moment in the book where I can see people pointing to as a sign that Grace might consider Pete as a legitimate suitor, but I saw it as a momentary lapse of judgment and confusion due to stress.

I guess I shouldn’t be surprised by the questionable female friendships. Grace’s friend, Faith, likes Pete, so she’s not too thrilled by the fact that he’s into Grace. That’s understandable. What I wasn’t so into was that her friendship with Grace was defined by Pete — she’s sad they don’t spend as much time together anymore (but that’s because she doesn’t like Grace hanging out with Pete). She thinks Grace is leading Pete on, which is an idea I generally recoil from because it contributes to Nice Guy culture. He’s nice! He’s been friends with you since forever! He’s into you! Why won’t you like him back? If you’re not interested in him, don’t lead him on… by being his friend? Really?

Like any true mystery, there are many suspects. I thought they were all legitimate — the red herrings were not obviously red herrings in my opinion. So the twists and turns worked for me, even though the characterization was light and more often than not, the characters made decisions because the plot required it rather than because it was intrinsic to their character.

If you’re looking for a thriller with deep, interesting characterization, look elsewhere. If you’re looking for a fast read with lots of twists and turns — that may make you whisper to yourself, “WTF?” — The 100 Society is for you. That said, this book was the literary equivalent of a potato chip. Seems like a good idea at the time, but it doesn’t really stick around. C