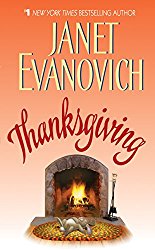 When Megan Murphy discovered a floppy-eared rabbit gnawing on the hem of her skirt, she meant to give its careless owner a piece of her mind, but Dr. Patrick Hunter was too attractive to stay mad at for long. Soon the two are making Thanksgiving dinner for their families.

I’d been half-heartedly wondering if there was a Thanksgiving story out there to review. Christmas stores? Out the wazoo. Hanukah stories? Becoming more plentiful. Thanksgiving? ::crickets:: Then I saw this and said “Ah-ha! There is one.” Plus it has a cute cover. Sucked in by the floppy eared bunny and the theme, I dove in. There’s humor here, lots and lots of humor but also some deeper stuff about relationships and readiness for them. Unfortunately, the most of the deep end was close to the end of the novella felt rushed trying to tie up everything that needed to be dealt with.

Megan works at Colonial Williamsburg! I love visiting there but imagine it might be … challenging to deal with it day to day. A close encounter with a hungry rabbit introduces her to Tibbles’ slightly slouchy, very cute but befuddled owner Patrick Hunter – a new pediatrician in town. Something that will be important the second time Tibbles gets loose and Megan has to haul it back home – during which time it eats a hole in her cape – before confronting its bemused owner with dire threats for not being a good bunny daddy.

It’s then that a client startles them both by leaving her baby with Dr. Hunter. After trying to track the fleet footed desperate mother down, Pat is confronted by Megan for a second time that day when she announces he simply can’t turn the child over to social services since the mother swore she’d be back. What Megan doesn’t cotton onto until it’s too late is she’s now volunteered to help Patrick look after Timmy until then.

This has an easy breezy style in which Pat and Megan trade one liners which the other doesn’t totally understand given the statements are often based on things they think rather than say. Pat also loves to tease, deliberately misunderstand or exaggerate things in good humor. He kisses like magic and Megan thinks she could get used to being kissed by him every morning while standing in her bathrobe in the kitchen. After 12 hours spent with Timmy, she hasn’t lost her sense of wonder even though he spits his mushed peas at her. Unaware that she’s got professional commitments (she’s a potter) and a big delivery due soon, Pat feels guilty about guilting her into this but he still can’t stop fantasizing about her – mainly as Mrs. Hunter in her nightgown. Megan, OTOH, is through with men. Except for Timmy.

Megan wonders where her life has gone in the past 48 hours. It feels like a tornado has torn through town and completely upended her. She’s babysitting, drooling over a pediatrician and has somehow been coopted into helping cook a full Thanksgiving meal for Pat’s whole family which should be interesting since she can barely heat a microwave dinner. Megan tries to stick to her “no men but a baby” rule but Pat makes it hard when he makes her coffee and brings her a red rose in the morning – along with Timmy and a van full of baby stuff.

Only in a romance novel would I believe that these two are thinking and lusting after each other to the point where each is more than susceptible to the others’ charms. But they are and I do. It’s like a rom-com movie in book form. But rom-coms often turn sour for me in the second half. Plus Tibbles goes AWOL for a while. Tibbles is on the cover, lounging in bunny fashion before the fireplace. I want more Tibbles!

Then their families get to met and bond. Ah, the wedding fit really hits the shan when the mothers get involved over a joint Thanksgiving dinner in Pat’s house in the historic district. I lust after this house. Wide plank flooring, huge fireplace, period paint job. Between them, Mother Hunter and Mother Murphy will have these two married by Christmas. Megan is feeling the love vibe in spite of herself but as she admits to herself there are many kinds of love – for parents, for a man, for a child – and she’s feeling bloated with happiness. Then it all catches up with them – the happy families, yes but also Megan’s past disasters with engagements and Pat’s immediate future of hard work and medical school debts. Hmmm, indeed.

Suddenly Pat is getting cold feet to go with along his hot libido. He wants Megan, can’t imagine himself with anyone except Megan but he won’t commit. All of this makes me pissy. It makes Megan cool her jets as well since she’s tired of this similar behavior from so many previous relationships. Pat knows about all of them, the nitty gritty and pain that Megan endured and he’s still unable to pull the trigger on a meaningful proposal not able to get beyond thinking about thinking about marrying her. I agree with his self-assessment that he’s a crumb though I am mentally using other words instead of “crumb.” Then after a medical emergency, and really why do people call MDs when they need DVMs?, Pat is a converted and ready to “I thee wed” man. Sorry but I’m not convinced. I’m thinking about thinking about being convinced but not there yet. Plus, the cover promised me a rabbit and I barely got one. Not happy. C+