A story about the elusive Chupacabra, a hot bad guy who isn’t what his file makes him out to be, and two hot women, one with psychic powers and the other living with a curse, in a South American jungle dealing with a mythological creature sounds pretty exciting. However, there were elements to both the story and the writing of Tempting the Fire that didn’t work for me. 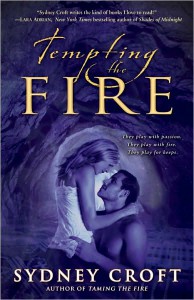 Sela Kahne is an operative working for the Agency for Covert Rare Operatives (otherwise known as “ACRO”. Hee…you made an acro for ACRO) and is a trained cryptozoologist. She’s back from a cryptozoological conference and for some reason, is covering her attendance at the conference as a vacation. Within moments of her return to work, Sela is told she’s going to the South America to infiltrate a company called Global Weapons Corporation (GWC). ACRO has gotten a hold of a very strange US military recording of what may be an attack by El Chupacabra, and there is a GWC camp in the area that may have either taken out the SEAL company or may have sent their monster to do it.

Sela does have special powers (other than a degree in cryptozoology), which is why she’s an agent for ACRO. She’s psychic. But her psychic powers only kick in when the person she wants to read is having an orgasm. Now that I see that written in black and white, it’s absolutely hilarious. Sela originally worked for ACRO as a Seducer (which seems to be an entry-level position from what I’ve gleaned from the book). On her last Seducer assignment, Sela was beaten to within an inch of her life by some sadistic no-good criminal, so she won’t work as a Seducer any longer which makes it odd that she’d be used for field duty…except in a case like the Chupacabra. Sela and another female operative are headed to the jungle to let GWC capture them. There, Sela will be able to get as much information as possible on the Chupacabra and the other operative, Marlena, will act as the Seducer, working on Logan Mills, second in command at GWC. ACRO’s very interested in GWC’s activities. Agents have discovered that GWC has been contracted by Itor to produce and sell weapons. Itor is public enemy #1. If all of this sounds confusing, make no mistake, it is. The first chapter of the book is very info-dumptastic and the reader is introduced to a huge cast of characters, all of whom we’re supposed to care about.

Once things move to the jungle, the book gets more interesting and less confusing. Of course, ACRO’s plan of having Marlena seduce Logan doesn’t work out (shocker). The story between Sela and Logan is interesting and there is real character development. Marlena and Chance’s storyline is significantly less engrossing, and borders on simple hormonal sex. I think a lot more could have been done with these two and we could have spent a lot less time with the third storyline. This occurs at ACRO HQ and pulls the action away from the jungle and it annoyed me to no end. I couldn’t figure out why Creed and Annika were so important, so I went and looked at the authors’ backlist to see if they had their own book. Imagine my surprise when I found out that 1. they don’t and 2. they’re slated to have one at some point. I’ve read so much about the two of them that I’m not interested in reading any more. Out of all of the characters introduced to me in Tempting the Fire, I found Annika to be annoying and acting on the verge of stupidity and Creed to be stubborn and boring.

Sydney Croft is the pseudonym for Stephanie Tyler and Larissa Ione. I don’t think I’ve read any stand-alone books from either author, and this book, while having exciting elements and some interesting characters, couldn’t hang together for me. I felt that Sela and Logan’s relationship and even the secondary story of Marlena and Chance were shortchanged due to the gigantic cast of characters not integral to the main story that took up so much space and time. C