The art of tattooing is intriguing to me and I would love to read more romances where the artistry of tattooing plays an important role. Past books of yours have not interested me because many of them have a roman a clef tone to them which is not something I look for in romances but Temptation’s Edge had a tattoo artist and I felt like it was a great time for me to re-acquaint myself with your writing. I did have a laugh that the intrepid heroine, Mischa, is not only a tattoo artist but also a writer of short erotic fiction. Why she was given this avocation is never explored or explained. It is a throwaway as it is never referred to again in the course of the entire novel. 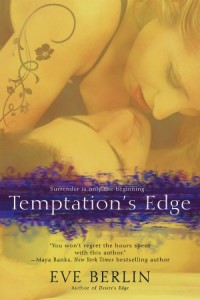 Mischa is in Seattle for two weeks to execute some of her maid of honor duties to her best friend Dylan and to decide whether she will open up a new tattoo shop in the Pacific Northwest.  She has a successful shop in California.  At an engagement party, Mischa meets Connor Galloway, a friend of the groom to be.  They have an immediate attraction.  Connor became friends with the groom to be over the course of encounters in the BDSM lifestyle.  Mischa has dabbled in the lifestyle but never found a man she felt comfortable submitting to, sometimes in part because the Dom simply wasn’t strong enough of a personality to exert the necessary control.

The two begin what they believe to be a mutually satisfying physical relationship but as their physical play deepens, their emotions become entangled.  It is the emotional aspect that is both the strength and weakness of this story.

While the book made certain to emphasize the after care portion, Connor’s running out when Mischa needed after care seemed like one of the worst betrayals a Dom could enact on a sub.  How could she trust him after that?  Unfortunately that was never answered.  When all these emotional issues appeared to be wrapped up within a couple of chapters at the end, I wasn’t convinced that either of the two were going to be able to stick it out together for the long term.

I did like the tattooing aspect of the story which was fairly well integrated into the storyline.  The story was a little dark and a lot emotional, but the repetitive nature of the angst, the quick resolution of their problems, led to a disappointing end for me.  C