REVIEW: Temptation is the Night by Marguerite Kaye

It had been love at first sight when Jack Damarell, the Eighth Earl of Crieff, and American artist Lindsey van der Maier met on the steamer to England. Their marriage had been filled with white-hot passion—until Jack’s dark memories of the trenches drove them apart. 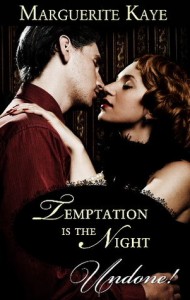 Now Lindsey has returned, and Jack has resolved to exorcise her from his heart with one final night of lovemaking to prove that reality couldn’t possibly live up to his memories. But can Jack hold onto his conviction when their sensual encounter exceeds his imagination?

Sometimes Harlequin Undone stories work for me and sometimes they don’t. Here, I just don’t get it. Or don’t see it – one or the other. How the heck did the sudden turn around happen?

The story starts with Jack so determined that He Can Never Love and that he’s over Lindsay. After all, she left him. No wait, he drove her out and then she left him but it’s all her fault. No wait, it’s his darkness left over from the war which he thought her pure innocence could cure but it didn’t and he’s too dark inside and their marriage will never work. No wait, he just needs one night of sex to prove that it can’t live up to the memory of her in his mind – one night to f*ck her out of his life and he’s done here. But wait, she’s grown, she’s matured, she’s ready to take control of the sexing and it’s hot and mind blowing to the point where she ends up entreating for another chance at their marriage. But no, it won’t work and regardless of what he told her about giving them another chance if the sex was hot, it’s over.

At this point, something happens that goes a bit over the line for me. It sounds like stalking and today I’d get a restraining order if this went on much longer. And if it had been Jack doing this I would have screamed bloody murder. To me it really isn’t okay despite the fact that it comes from the heroine. Who again ends up entreating cold, broken, “No this can’t ever work” Jack.

So…she leaves and tries to really get over him, dragging herself along through her days. Until 2 months later, she gets a note to meet him in NYC. She goes to see him and is surprised because he’s changed. He’s over his belief that it’s over. How, I have no idea. Or if signs of his change are there, I totally missed them. He says he knows what his problem was and it’s all better now. What? How? In two months? Six years of shell shock, nightmares, and black outs are over? Cured? What? and HOW?! No, I don’t get this sudden change.

The set up is cool. The time period is great. The sexing is hot – well, I’m still uncomfortable about what Lindsay pulls in London. But I truly don’t believe that Jack is over what was tormenting him to the point that he was willing to give up this love of his life. Lindsay does forgive and forget – he’s her one and only too – but I don’t see the bridge from how the book starts to how it ends. C

→ Jayne
Previous article: REVIEW: Confessions from an Arranged Marriage by Miranda Neville
Next Post: REVIEW: Blame it on Bath by Caroline Linden