I’m a sucker for superhero romances, which is why I had to pick this one up. 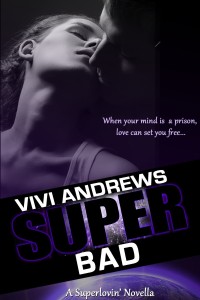 Supervillain daughter Mirage aka Mirabelle Wroth has been in treatment for the last 3 months after destroying the mind of the man who turned her into his mental plaything. Her shattered mind leaves her unable discern which are implanted memories and emotions and which are real ones.

Her brother Lucian is at a loss at what to do to keep Mirabelle from hurting others as well as herself. When Lucian’s superheroine girlfriend suggests bringing Captain Justice whose abilities include forcing others to tell the truth, Lucian reluctantly allows Justice access to his sister. Recently dumped by his ambitious reporter girlfriend, Captain Justice, aka Julian Case finds an unexpected connection with Mirabelle.

I think what I found odd about this novel was that it seemed like a superhero story that had been cut and pasted with
passages taken from teen romances. So despite the fact that both Mirabel and Julian end up in serious life or death situations, they both still have time to ruminate about each other’s sexiness in a rather juvenile manner.

It was weird to think they might be friends. If he’d been just trying to get into her pants, she would have understood it more. She certainly wanted into his. And, since her relationship with Kevin, she knew better than most that you could be physically attracted to someone who repulsed you on other levels. But for Julian to actually like her. For him to push himself beyond his limits just because he enjoyed seeing her happy.”

On the other hand, the pairing of Julian, who is portrayed as seeing the world in black and white, with Mirabelle, a supervillainess-who-believes-she-is misunderstood was a nice contrast. The scenes in which Julian and Mirabelle are fighting about the nature of superheroes are probably some of the strongest scenes in the book.

“…[Y]our father is one of the most powerful supervillains in the world,” he barked. “Are you proud to follow in Daddy’s footsteps?”

“You don’t know shit about my family. My father is a scientist. He’s never hurt anyone. We only steal the supplies he needs for his research from major corporations who can afford it –”

“Demon Wroth? What world are you living in?”

“The real one. Not the one defined by rigid moralistic assholes who named themselves Protectors of the Universe just because they happened to be born with superstrength.”

Both Julian and Mirabelle’s lack of emotional maturity made the scene where they finally get together seem rather tired (one of those instances where they are physically thrown together because of danger and they end up kissing each other). It seemed rather like generic action movie romance stuff and as a result, the sex scenes seemed very dry and just didn’t emote. The sex scenes tended to be mostly physical descriptions that were relying on previously developed emotional tension to have impact. As a result, I found them rather ho-hum.

The plot is rather flimsy as it relies on making Mirabelle’s Big Bad Dad out to be a misunderstood guy, but not before he kidnaps two other people and forcibly injects them with an unknown substance. What more disappointing was that the ultimate resolution talk between Julian and Bad Dad happened “off screen,” so to speak.

Though there are some nice reversals of the traditional comic book narrative (like the up and coming reporter dumping the superhero) I think I could have used a little more chemistry between the main characters.  C