REVIEW: Still Hot For You by Diane Escalera

In the teaser for your book, Still Hot for You, your publisher Lyrical Press, describes it thusly:

Want to get your man talking?  Give him booty!

Desperate times call for desperate measures. And Shay LaCosta is pretty desperate. She’s wrecked her blissful marriage of five years by demanding she and her husband Dylan have a baby. What the hell was she thinking? She knows she was wrong and she’s ready to set things right, if only Dylan will let her. Bet he can’t shun her Booty Camp offer: delicious, white-hot sex in exchange for what’s going on inside his brain. 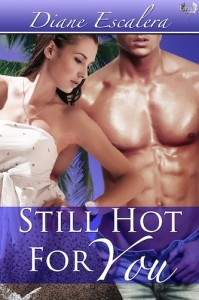 I, like you (according to your biography), am married with kids. Like your heroine, Shay, I was once twenty-nine and hell-bent on having a baby. I mention my own experience because I found Shay’s desire to have a baby pretty normal. I think many couples, after several years together, do begin to think about having kids. (About 75% of American women have had at least one child.)  And let’s be honest, the older a woman is, the less easy it is for her to conceive. (Fertility starts to decline for women from about the age of 30, dropping down more steeply from the age of 35.)  So, to me, Shay’s desire seemed pretty sane.

That’s not to say I didn’t empathize with Dylan’s lack of interest in a baby. He’s dug himself out of poverty, works really hard, and isn’t sure he’s financially ready to take on the responsibility of a child. Kids are expensive—in 2011, the average cost for raising a kid in the USA from birth to 18 (this excludes college) was just under $200,000. Having a baby is a life changer.

Dylan’s and Shay’s predicament is one that many couples (of all stripes) face. I wish you’d written more about it. Frankly, I couldn’t understand why Shay suddenly decides she’s crazy to want to get pregnant. When your book begins, Shay and Dylan are almost completely estranged. They don’t talk, haven’t had sex in five months, and each thinks the other may be ready to call it quits. Apparently, Shay had gotten angry at Dylan because he wouldn’t back her baby plans and told him to stay the hell away from her. OK. That’s a fight I can see—I couldn’t, however, see why he’d actually done it for five months or why she’d let him. The two love each other, are super hot for each other, and yet somehow, none of that is in play when the novel begins.

Over the next week, Shay keeps up her seduction campaign; the two have sex in the shower, hot tub, in bed, and on the kitchen counter. It’s clear they live in a very nice home—Shay’s got a good job with a banking company; Dylan’s construction business is going well—and, I have to say, all the descriptions of their home’s accoutrements distracted me from their mildly-hot sex. It’s hard to take seriously a sex scene set in “Their deluxe kitchen” which “flickered with amber candlelight that danced off the stainless steel appliances.”

By the end of your brief novel (my pdf was 78 pages long), Shay and Dylan have had a few short talks about the baby thing. Dylan has acknowledged he’s kinda crazy about money (he hates that Shay’s wealthy dad has always made him feel professionally and financially inadequate) and that, at some point, a baby or few would be fine. Shay has decided she’s unwilling to give up working yet and, given that she wants to be a stay-at-home mom for at the least her children’s early years, she’s not interested getting pregnant at this point in her life. The two now have the same vague family plan and, thanks to all that booty and those few chats, are again wonderfully connected emotionally and sexually.

If there’s a lesson in your book, it certainly isn’t that solving tough issues in a marriage takes work. What I got out of your book was that hot sex can help couples come together (in more ways than one.) And that’s totally true. But more booty isn’t, even with a man as well-built as Dylan, a magic wand. Figuring out how to balance work and family and struggling with the issues around fertility are challenges that need more than coitus, cunnilingus, and a few chats. It irked me you raised such serious issues and then dismissed them so casually.

Your book is not all bad, however. There are elements that are well-done. You do a great job of making your characters distinctive—I really liked Dylan’s brother, cousin and aunt and could visualize the three of them, as well as Dylan and Shay clearly. You made Dylan’s love for Shay very believable—almost more so than hers which seemed to be substantially fueled by how sexy she finds him. You write cogently and clearly about Dylan’s and Shay’s jobs—I could see how they spent their time at work and why they loved what they did. Lastly, I enjoyed your enthusiasm for Shay’s and Dylan’s sexy marriage. So often romance novels have all the hotness happening before a couple weds—it was nice to see matrimony as a venue for spicy sex.

I would suggest, however, that next time you pen a tale of true love, you pay a bit more attention to the details of your prose. I’d have liked your writing more had you expanded your vocabulary—you use the same words over and over—and had you paid more attention to consistency. (Characters’ placements, dress, and moods were often discontinuous.)

You write, in a blurb at the end of your book, you hope readers will go to your website and find more “Stories that will hopefully touch your emotions, ignite your passion, infuse you with the belief that true love conquers all.”  Still Hot for You did none of those things for me. It was a standard C read.  It did however remind me that steamy sex in marriage is a damn good thing.