REVIEW: Some Kind of Hero by Suzanne Brockmann 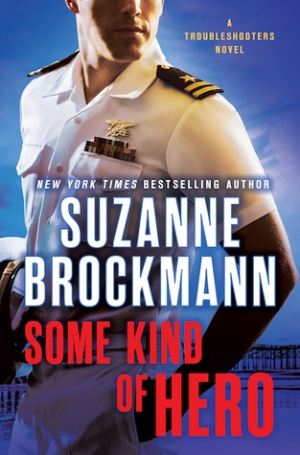 I have loved Suzanne Brockmann’s Troubleshooters series. Sometimes I thought them too preachy but given I agreed with much of what she was talking about (marriage equality for example) I was able to get past it easily enough.

I recently read the novella Ready to Roll, which introduced the hero from Some Kind of Hero, navy SEAL Lt. Peter “Grunge” Greene. I reviewed it on my own blog and I was very critical of a device the author used there (stage directions) which consistently pulled me out of the story. I expressed the hope she wouldn’t repeat the “experiment” in the forthcoming full length book and I am happy to say she didn’t. But…

There were two other things which substituted in the “constantly pulling Kaetrin out of the story” department. The fact that overall, I enjoyed the book is testament to her writing skills but oh how I wish I didn’t keep tripping over the author as I read.

The heroine in Some Kind of Hero is a romantic suspense writer. With writer’s block. Who has conversations in her head with her main fictional, FBI agent character, “Harry”, who happens to be gay (*coughJulescough*). Even though Shayla  Whitman is African American, I couldn’t help but feel she was… well, Suzanne Brockmann. To the point where I actually looked up whether she’d split up with her husband because I wasn’t even sure how much was fictional (as far as I can tell, she and Ed Gaffney are still happily married by the way).

“What do you write?” the SEAL asked.

It was a horribly loaded question, but of course he had no way of knowing that. So she kept her answer on the surface, instead of diving into the murky depths of Nothing, because I’ve been seriously blocked for close to two years now, to the point that even my most popular characters are on strike.

Harry, of course, popped back in. I’m not on strike, he said. But you gave me my HEA, and frankly, I’m not going to let you fuck things up between me and Thom. I’m in love and I’m happy. Leave me alone.

Leave him alone … ? Harry vanished as Shay started to laugh, but the SEAL was looking at her oddly again, so she told him, “Romantic suspense.” It was clear he didn’t know quite what that meant, so she clarified. “Fiction. Thrillers with a steamy love story … ? I write about a team of FBI agents.”

I think the “conversations” with Harry were supposed to be cute. But mostly, they just seemed weird to me. Shayla would tell Harry – out loud – to “Shhh!” fairly often and poor Pete never did get an explanation for Shay’s strange outbursts.

Still, if it had only been that, I would probably have rolled with it happily enough.

“Believe me, I’m very familiar with the disrespect this genre gets.”

“Yup,” she said briskly. “Not easy to do, but I managed—mostly because my characters act with believable intention…”

When Pete starts reading Shay’s work in an effort to get to know her better, the references felt even more obvious.

It opened with an action-packed scene of a bank robbery escalating into a hostage situation, and he found himself drawn in. The characters sprang instantly to life, and he could see Shayla’s ability to think outside of the box not just in the gritty realism of the scenario, but also in Harry’s attempt to control the situation. But she also clearly understood Murphy’s Law—whatever can go wrong, will go wrong—and she used it to go, believably, from bad to worse.

She’d talked about this concept more than once in the many online interviews that he’d read. The romance novels that Shay wrote were focused on her characters finding their Mr. or Ms. Right. But along the way, as she wrote her ongoing series of connected books, her characters sometimes shared an interlude with a Mr. Right Now. Imperfect to the point of being unacceptable—at least in terms of finding lasting happiness, and sometimes destined to be killed off, Mr. Right Now provided a sexual escape valve and/or the fodder for a rebound relationship

Which, Sophia/Decker/Dave anyone? It was intrusive. I wanted to relax into the story of Some Kind of Hero but I kept being yanked out of it by the author.

When I wasn’t tripping over Ms. Brockmann, I very much liked Shay and Pete. Even though the entire book (apart from the epilogue) takes place in about four days, I totally believed they fell in love in that time. I liked their connection and chemistry. I just wanted her to be a character I could see as separate from the author. Even the writer’s block was self-referential. The next book which was supposed to be out was book 2 in the Reluctant Heroes series. Ms. Brockmann has been very open about how that book just refused to come so she wrote this one instead.

On the plus side, the suspense plot, involving Pete’s missing teenage daughter and a drug lord who believes she owes him a lot of money, was gripping and the story moved along at a fast clip. For the most part, the characters stuck to their skill-sets. Pete and Shay don’t get intimate at inappropriate times and I appreciated their maturity and the way they talked fairly openly about their desires and feelings. Maddie, Pete’s daughter, still reeling from the death of her mother and moving in with a dad she barely knows, felt relateable and the romance between her and “Dingo” was pretty sweet actually, notwithstanding the age difference (she’s 15, he’s 20). It could have been ick but it really wasn’t.

Perhaps very topically given the Trump administration, Maddie’s maternal grandparents and some of her other family, were interned in Manzanar, the camp in the middle of nowhere in California during WWII. Maddie’s Great-Aunt Hiroko was a salty, sharp woman I liked very much and the point about Japanese internment camps was very well made (perhaps a little bit of the preaching crept in. Well, not perhaps. Definitely. But again, I didn’t mind it terribly  much because people do need to know what happened there and yes, it was shameful and terrible and absolutely NOT OK). I’d be interested to hear from Japanese-American readers about the depiction – I’m unable to say whether or not there may have been any appropriation. (I didn’t pick it up but that doesn’t mean it wasn’t there.)

Izzy Zanella features prominently in the story but, happily, for the most part, he had actual relevant stuff to do. Yes, there was one scene where he was basically doing nothing more than eating pancakes but if I squinted I could tell why it was there. The members of Boat Squad John were featured as well. In Ready to Roll the parts I most enjoyed were about the way the squad bonded during Hell Week/BUDs and it was nice to see them again. Plus they were also relevant to the story.

As part of operation “improve Pete’s and Maddie’s relationship” Shay encourages Pete to tell Maddie (via email) the story of him and her mother, Lisa. It reminded me, in the best ways, of the historical romantic subplots in books like The Unsung Hero.

The things I liked, I liked very, very much. But the things I disliked were as fingernails down a blackboard to me. Coming up with a grade was a bit of a balancing act. I have, in the past, enjoyed books where one of the main characters is an author but it’s usually something I have to get past rather than a trope I actively seek out. And I totally get the thing about “write what you know” but I prefer more separation between the creator and the creation. If I can see the author at work it pulls me right out of the story and that happened over and over again in Some Kind of Hero. Shay did use her writing and research skills to good effect in the resolution of the plot but I can’t help but think I’d have enjoyed the book a lot more if she had a different job.

“But before I did, I switched point of views,” she told him. “Right at Loretta’s line of dialogue. Kiss me—boom. New scene. For the actual sex, we’re now inside Loretta’s head. You were reading the ebook, right? Sometimes scene changes aren’t clearly marked in the e-format. I hate when that happens.”