REVIEW: Shut Out by Kody Keplinger

I read your debut novel, The DUFF, earlier this year. While I didn’t think it was as mindblowing as I was led to believe, I liked it enough to look out for your future books. When I learned your sophomore effort was a retelling of Lysistrata, my interest was piqued. How would the play be adapted for a YA audience? 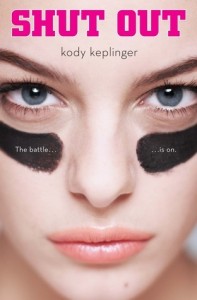 At Lissa’s high school, the sports rivalries aren’t with other schools. Instead, the football and soccer teams of Hamilton High are at war with each other. Lissa, for one, is sick of it. Her quarterback boyfriend, Randy, spends more time pranking the soccer team than with her. And even when he is with her, Randy has no problems leaving her high and dry in order to get even.

The competition between the soccer and football teams also affects other things. When Lissa’s best friend started dating a soccer player, things got awkward between them and now they hardly ever speak. A sad state of affairs if there ever was one.

When a soccer player gets sidelined for the season and Randy shows up for a date battered and bruised, Lissa decides she’s had enough. Recruiting the girlfriends of the other athletes, she organizes a sex strike. As long as the two teams continue their petty rivalry, the girlfriends will withhold any and all sexual favors (including kissing).

Based on your previous novel, I expected sex positivity and I wasn’t disappointed. All flavors of female sexuality were portrayed here — from the teen girl who likes sex without commitment to the virgin who’s not ready yet. I definitely liked that the double standards applied to girls and boys were addressed: a guy who sleeps with lots of girls is a stud; a girl who sleeps around is a slut. The message here being that no one way is correct other than what’s right for you. There is no “normal.”

On the other hand, I thought that message was presented with all the subtlety of an anvil. It was almost as if this book couldn’t decide if it wanted to be an issue book or a fun battle of the sexes. I thought this was particularly obvious in the second half of the novel in which the heroine, Lissa, starts acting in ways that don’t really fit with how her character was portrayed in the beginning. I like character evolution, but I need a little more motivation to go on.

In addition to organizing the sex strike, Lissa has two other complications in her life: her family and her attraction to the unattainable soccer player, Cash. The subplot involving her older brother and his mysterious girlfriend was painfully obvious and seemed tacked on. Lissa herself didn’t seem surprised by the revelation of the girlfriend’s identity. It neither added nor detracted from the book. It was just there. I did enjoy Lissa’s relationship with her father, however, and his unwavering support of her. As I’ve mentioned before, I do like supportive parents in YA.

As for the romantic plot with Cash, I really wanted to like it. Girl with bad boyfriend finds new love with a decent guy? Why wouldn’t I like it? But it fell a little flat for me. Maybe it was just too straightforward. Randy is a jerk. Cash is a nice guy. We also learn that Lissa and Cash have some history during the time period in which Lissa and Randy were on a break. But nothing ever came of it. Why? Because they didn’t talk.

I realize miscommunication and lack of communication is an oft-relied upon trope in stories, particularly in those of the romantic kind. And while I understand that having these kinds of conversations can be tough as a teen (or even as an adult), a lot of what happened in the book really could have been solved with a 5 minute conversation. While I can find it believable for Lissa not to want to initiate a conversation — much of her personality is dependent on maintaining the status quo for fear of losing everything — I don’t find it believable that the golden boy of Hamilton High wouldn’t even try. I can buy the existence of a hot shy and clueless boy, but not if he’s making out with girls in the library. I think the lack of communication — any communication — really detracted from the book.

Shut Out is a fast read and a pleasant way to spend a couple hours. While it has a great message for teenage girls, I think it might be too heavy-handed in the execution. And unlike its predecessor, the various subplots don’t come together quite as smoothly. C