In general, with the exception of Deadwood, I have never been a fan of the western. I’ve read good things about your Hell’s Eight series, however, so I thought I’d see if perhaps your book Shadow’s Stand might be the western that changed my mind. After finishing it, I am open to reading another western. That said, I don’t think it will be one of yours. 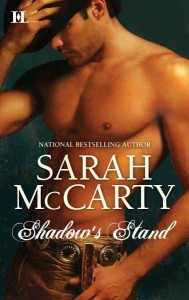 My struggle with Shadow’s Stand began with the opening scene. The time is the summer of 1859; the place, the West Kansas territory. Fei Yen, a young Chinese American woman, needs a husband and she needs him fast. There’s a new law that forbids Chinese from holding mining claims and Fei has a claim on which she’s found gold. (Were you were referencing the Foreign Miners Tax passed in California in 1850 that taxed any non-citizen—which meant non-white–claim owners at astronomical rates?) There’s also, in your book,—I couldn’t find any mention of such a law after a cursory internet search so I’m taking your word for this—a law that allows a woman to take a condemned man as a husband thus saving him from death and giving her a spouse. This law also states that should the woman become displeased with her convict, she may return him to the gallows where he will be immediately hung.

Fei, who has just locked her literally crazy father in the cellar and has no one to turn to, rides into town and claims the half Mexican, half American Indian Shadow Ochoa just as he’s about to be hung. Shadow, though, despite the noose around his neck, refuses to be claimed by Fei until she actually asks him to marry her. The sheriff, racist asshole that he is, starts to hang Shadow before Fei has a chance to say anything. Fei grabs up a knife conveniently sticking out of a nearby boot, runs up Shadow’s body and, as he is choking to death, saws through the noose around his neck and, in the literal nick of time, cuts him down. Even after she’s saved his life, he still won’t take her up on her offer until she gasps out “Marry me,” to which he replies, “I thought you’d never ask.”

None of this made much sense to me. If Fei needs someone who could legally protect her claim, why pick Shadow, a non-white? Won’t he run up against the same prejudices and laws limiting the Chinese? The men hanging Shadow are violent racist drunks; Fei, a young unmarried attractive “half-breed” Chinese with an out of it dad, lives near them and yet none of these cretins have managed to rape or harm her. Shadow viciously fights the men trying to hang him, despite having his hands tied behind his back, and yet, when offered escape, he refuses it. This seemed unlikely to me. One moment he’s fighting for his life and the next he needs to be wooed?

After the two are (maybe legally, maybe not) married by a drunken “padre,” Fei, who married Shadow so she’d have protection, then asks the same men she’s worried will harm her and steal her claim to put Shadow in shackles and toss him in her wagon.  Fei puts the key to the shackles “into the lace-trimmed pocket above her breast” and Shadow thinks “Of all the things that pissed him off about the last day, it was her drawing attention to her breasts that he resented the most.” REALLY? Being beaten, hung, knifed, and shackled all rankled less than having to notice his new wife has breasts?

Shadow doesn’t want to have hot flashes for his bride because “inside him there was only darkness.” He’s a bad, bad man, or so he tells himself over and over. Fei, of course, can tell by page 30 he’s wrong about himself, that really, he’s an honorable guy. That dynamic pretty much sums up most of the book. Shadow can’t stay with Fei because he knows he’s not a marrying man, he can’t love, he isn’t worthy—the dude’s got quite a list. Naturally Fei falls for him like a ton of gold bricks. Everything about him–his voice, his body, his arrogance, his strength, his overly thick eyelashes, and, especially, his outrageously stimulating kisses—gives her pleasure. She’s sure he’ll leave her once he’s helped her but she gives herself to him anyway—she wants what she believes will be her one shot at passion and love even if she knows it can’t last.

Part of the problem with this dynamic is that it allows both Fei and Shadow to act inconsistently. Fei picks Shadow as a protector, and then locks him up. She kisses him passionately, and then tells him they can’t have sex. A few chapters later she’s changed her mind and goes to great lengths to be able to make love with him. Shadow behaves just as contradictorily. He freaks out when she’s in danger, and yet plans to leave her as soon as he honorably can. He’s consumed by lust for her and yet doesn’t have intercourse with her. Until he does—I had no clue what changed his mind.

Their relationship flip flops between the two sharing their deepest thoughts to not telling each other the most basic pieces of important information. At times, Fei trusts Shadow with every aspect of her being. A chapter or two later, she doesn’t tell him the truth about her plans or her feelings. Shadow is at times all action and the plot whooshes forward; other times, he just lets things happen, too busy feeling sorry for himself to take charge. Neither of them really owns their separate and combined fates—it takes the other Hell’s Eights to show up and push the two into their happy ending. Fei and Shadow were more irritating than interesting, despite their unusual backgrounds.

Your plot was marred by Fei’s and Shadow’s emotional melodrama. The most interesting parts of the book involved the two fighting against the racist establishment’s efforts to steal Fei’s claim. I enjoyed all the information about explosives although I thought it unlikely that Fei’s sexist father would have taught Fei his craft as an explosives expert for the mining company. But the parts of the book—and they seemed to go on forever—that dealt with Fei’s relationship with her Chinese family dragged for me. I haven’t read the first four books in the series, so the plotline revolving around Shadow’s being wanted for murder by the United States Army was both a little hard to follow and clearly not resolved in this novel. (It bothered me Fei risks her life, at the end of the book, to steal a notebook that may or may not shed light on the truth about the man Shadow killed, and then nothing more was mentioned about it.) I felt like the novel had some exciting scenes and far too many meandering confusing scenes.

I wish you’d done more with the social issues faced by your main characters. The American West in the 1850’s was a brutal place in which to be a woman, a Chinese, an Indian, or a Mexican. You touched on the prejudices Fei and Shadow faced but didn’t really explore them. Your book showcases what Fei and/or Shadow are thinking rather than what they are experiencing. One of the oldest adages on writing is it is better to show than to tell. Shadow’s Stand is full of telling—it would have been a much more riveting book had you spent less time elucidating your characters’ inner musings and more time describing the world around them.

Your sex scenes were detailed without being very sexy. Shadow clearly has a dominant side but keeps it suppressed around Fei. He swats her butt, uses lots of four letter words when the two have sex, but for all that, their love making is a bit uninspired. Here again, I got a better sense of what the two were thinking when they made love rather than what they were feeling and/or doing. I understand the earlier books in your series are quite spicy–this book was not.

You also have Fei, the first time she wants to have sex with Shadow, do a truly creepy thing. Fei and Shadow have rescued Lin, Fei’s more traditional Chinese cousin from an angry old lecher. (Fei’s father had sold Lin to the man to pay a debt.) The three of them are traveling to the town of Barren Ridge to return Lin and Fei to their Chinese family. Although Fei and Shadow have only known each other a few days, Fei has decided she wants to do the deed. However, since they are in the middle of nowhere and being pursued by several different villains, Fei and Shadow can’t head off into the hills and abandon Lin while they get busy. Fei’s solution to this? She gives the unwitting Lin an herbal tea that knocks Lin out. Fei tells Shadow, “If I had not, she would have spent the night talking and I would not have had this time with you.” Even Shadow “didn’t know whether to be flattered or appalled.” I was appalled. There’s just no way that’s an acceptable thing to do.

Ironically, the thing I liked best about your book was the setting. The American Wild West was crude and violent; poverty beat out prosperity for most who journeyed there. The rule of law rarely existed, women were far and few in between; the prejudice faced by and done to immigrants and Native Americans was extraordinary. That world which you convey bits and pieces of is a fascinating place.

Note from Jane: Dabney is a new guest reviewer for Dear Author and will be reviewing here during the Spring to see if she feels comfortable with us. You can find her at her blog http://thepassionatereader.blogspot.com/. You can also find Dabney at All About Romance.