When I first read the review thoughts of Mandi from SmexyBooks on this book and she sounded, well, bored by a book that she described as a classic Cole, I thought to myself that it was impossible for a book to be a signature Cole and be boring. But after reading the book, I completely understand Mandi’s point of view. 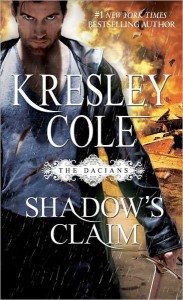 Every element that I enjoyed in a Cole book (but didn’t get in Poison Princess) was included somewhere in the text. There were funny moments. The intense Cole male. The heroine who isn’t it in the hero right away. The sexiness and delayed gratification.  But there was no urgency that propelled me to turn the page.  The story is entirely predictable.

I believe the problem was two fold. First, the vampire male who must have the Bride who blooded him is a classic Cole hero but there wasn’t anything more of interest to the Shadow warrior. So what that he was a great assassin? Who in the Lore is not a great killer? Even the slyph or phantom that guards the heroine is “ruthless warrior” as is the object of her affection as is Victor, Trehan’s cousin and constant foe. Everyone is the greatest of great. This brings me to the second complaint. The stakes weren’t high enough. In each previous book, there was a truly impossible conflict and I looked forward to seeing how it would be written to conclusion. How would Cole get out of this one, I would ask myself.

In this case, the conflict wasn’t just possible, it was already foretold.  We know from Lothaire how the story unspools already because Shadow’s Claim takes place at the same time. What the reader is supposed to find compelling is that the hero, Trehan, may never be able to return to  his home of Dacia.  But so much of the text was given over to describing Trehan’s life as dull and full of duty that it was hard to see why he would want to return. Particularly when it is discovered on his very first encounter with Bettina that she is his Bride, the special being created just for him.  In the Lore, a vampire’s heart does not beat, his shaft does not become engorged, he does not breathe until blooded by his Bride.  Now that he has found her, we are to believe he gives two hoots about his hidden kingdom?

Bettina of Abbadonae, the heroine, was probably a good match for Trehan given that she is just as dull as he was.  Bettina is  half demon and half sorceress. I don’t recall any traits that she received from her demon father.  Her power is a Sorceri power.  She has no horns nor does she turn red like other demons in the  Immortal After Dark world. She dresses and really self identifies with the Sorceri.  Bettina’s halfling status has no bearing in this book and the failure to use that typifies the world building problems here.

There appear to be an endless number of random kingdoms and creatures in the Lore, as many as there are books to be written, I guess.  This kingdom, like the Dacian kingdom, is remote and largely inaccessible.  Trehan calls it a swampy backwater.  I’m not sure why I am supposed to care about it. It’s like one of those random desert kingdoms in the Harlequin Presents Sheik stories.  The demons in the swamp of Abbadonae are called deathly ones but there are no swamp-like backwater features about them.  They drink, they kill, they have sex. Sounds like every other place in the Lore.  Bettina runs around for most of the book trying to decide whether she truly loves her best friend Caspion or whether she should submit to her growing desire for Trehan.

The main plot is this.  Bettina was captured by an enemy of the Sorceri and tortured. She is saved from her torture when her Uncle uses a summoning spell. (Why he uses it as this particular time is unexplained)  When he sees her beaten and tortured, he and her other guardian, the most powerful Sorceress in the land, Morgana, devise to hold a tournament in her honor.  The winner of the tourney will win the crown of Abbadonae and Bettina’s hand in marriage.  She agrees to this.

The rules of the tourney are so poorly crafted by the guardians that it’s like a preschooler wrote them up. Many creatures enter, one creature wins.  As the competitors arrive, Bettina and her guardians are a little horrified by the types of creatures that enter the tourney. I’m wondering why they didn’t craft the rules better.  When it becomes clear that the Uncle wanted Bettina’s best friend and the subject of her fantasies as the winner, I’m just shaking my head.  Why not just get them to marry then?  The why is, of course, that we wouldn’t have place for Trehan and the big tourney but that is so contrived it’s frustrating. Trehan can easily win the tourney but killing Bettina’s best friend and presumed love of her life would make them enemies. The resolution to this is so achingly obvious.

The elements of a good Cole book are here but nothing much happens. The step toward the Ascension isn’t occurring. I felt like I was a reader in stasis and as Trehan knows, that’s not really a good thing.  C