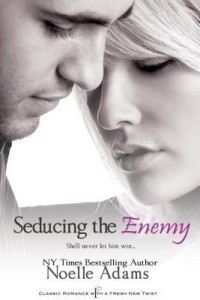 I think this may be my first read from the Entangled Indulgence imprint, which gives readers of category romance another option besides Harlequin.  Seducing the Enemy seems to be going for the dramatic category feel, which for me is Not A Problem. Our heroine Etta is a twenty-five-year-old virgin looking to start experiencing life; when she meets Harrison, his air of power and authority entices her and she spends the night with him. She’s later horrified to discover that he’s Harrison Damon — part of the powerful family her grandfather is suing over an accident that killed her sister, and left Etta partially paralyzed for thirteen years.

As a rich and powerful hero, Harrison naturally has a bad experience with a deceitful woman under his belt. He assumes that their night together was a planned seduction and goes all Harlequin Presents on Etta’s ass:

“Ms. Edwards,” he bit out, still gripping her wrist. He refused to think of her as Etta. “Tell me why you’re here.”
“Isn’t it obvious?” she spit at him. “One taste of your irresistible self — your alluring charm and unbridled sexiness — just wasn’t enough. I’m here to throw myself on your mercy and beg you to take me back.”
Harrison lashed out at her venom with the only means he had available.
He kissed her — hard, deep, and punishing.

Her free hand flew to him as her passion transformed to rage.
He caught it and held both wrists against the wall, trapping her completely.
He stared down at her. They were both flushed and painting, but her quaking had intensified. In addition to the anger, tears glistened in her eyes.
In a rush, he realized she was scared and helpless. And he gripped her wrists so hard, they’d probably bruise.
He has no idea what had come over him. He’s never been so unrestrained. He lived his life by certain rules. He was physically stronger than Marietta. She was a guest in his house. And no matter what the provocation, he didn’t treat women this way.

This is the kinder, gentler, modern category hero — that is, he still thinks the heroine is a gold-digger and gets abusive with her, but he’s horrified with himself about it.

Thwarted passion, misunderstanding, and hurt make for an enjoyable jolt of feeling. There’s also a protective, comforting element to their relationship: Etta has a severe phobia about beer and is prone to panic attacks, and Harrison is on hand to rescue her. These familiar components give a good emotional charge to the story.

But the rest felt somewhat flat. Etta’s meekly respectful interactions with Harrison’s uncle make her seem dull and cowed, and there are many scenes of her and Harrison laughing together which just aren’t particularly funny. And though story takes place in Monte Carlo, Aix (Etta’s hometown) and England, there’s very little in the way of local color or sense of place.

Etta’s backstory also never felt real to me. Here’s what she thinks about her past:

No more living a quiet, sheltered life. Maybe it was natural — she’d been in a wheelchair for thirteen years after a car accident when she was a child, and she’d only started walking again two years ago. With the lawsuit against the Damons settled, it was time to go out and have fun, like other women her age.

I can’t believe someone who was disabled for thirteen years would really think this way — surely she would have come to terms with it and started living her life? And a high school boyfriend is mentioned at one point, which contradicts this grim picture. There’s no depth to the portrayal, so Etta’s former disability comes off as just a manipulative plot point and a discomforting excuse for her virginity.

This is the first Adams (or Claire Kent) book I’ve read that wasn’t self-published, and though it has fewer proofreading errors, I don’t think it reached the compelling intensity of the previous stories.  But although some of it feels bare bones, the relationship has enough passion to make this an entertaining, easy read for those who enjoy category romance conventions. C