When I saw this book featured an MMA fighter as the hero, I immediately snapped it up. The $2.99 purchase price didn’t hurt and neither did the trope: best friend of the older brother. Forbidden loves can be delicious. 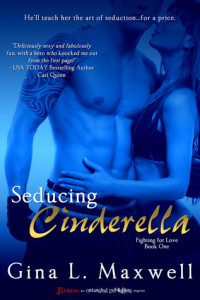 Lucie Miller is a physical therapist in love with the orthopaedic doctor she works with. Unfortunately he is asking for the phone number for her best friend. When Reid Andrews, an old friend, offers seduction lessons in exchange for one on one physical therapy, Lucie agrees.

Both Lucie’s profession as a physical therapist and Reid’s profession as a fighter are only given light attention. Very little of either occupation – either therapy or fighting – is shown. Most of the time is given over to Reid’s seduction lessons which included shopping scenes, make up scenes, and kissing scenes. Finally they both agree to sleep together in order to bolster Lucie’s confidence. (If that isn’t one of the weakest lines to get a girl into bed, I don’t know what is). Of course, at the same time, Lucie is out trying to hook her doctor.

I didn’t learn much about MMA and fighting as a sport which was disappointing. Reid needs to be in shape for a Championship bout in two months. The ability of the top of the card to fight an event is very important. A recent MMA fighter dropped out due to injury and the remaining title contender refused a different challenger. He is being criticized all over the place because the undercard events for the smaller fighters won’t take place either which means many people will go without a payday. There wasn’t even a hint of jeopardy for Reid not fighting and not being prepared. There isn’t any concern that he won’t be ready. Even the big fight was a fade to black. Missing out on that scene, when his entire focus for living was the championship title, was a bit like reading a bunch of foreplay scenes and then getting the bedroom door slammed in my face.

There were a number of plot threads introduced and then ignored including the fight thread but also Reid’s dream to be a sculptor and artist; Lucie’s dream for a family and the white picket fence house; Reid’s concern that his identity is wrapped up in being a fighter. I wondered instead why a man of his age didn’t take up sculpting or art classes if he loved them so? It couldn’t be the influence of his father because he had broken from his father, moved away from his father, had a different manager, trained at a different gym. Those weren’t signs of a man controlled by his father. Lucie’s desire for the picture perfect (she literally had a magazine photo cut out of what she wanted her life to be like) kind of faded away. As Lucie’s feelings for Reid developed, I wasn’t sure why she couldn’t place Reid in her picture perfect life.  Yes, he lived in Las Vegas and trained there, but there wasn’t any internal exploration of why Vegas wouldn’t work for Lucie.  She had no family in town to keep her where she was and I am certain there are houses with picket fences even in Las Vegas.   There was just no exploration of how Reid could be that guy in the picture for Lucie. I guess we were just supposed to assume that romance and love takes the place of idealistic dreams.

It’s a standard insecure frumpy girl gets a makeover to get a man. In this pygmalion story, Reid is the teacher showing Lucie how to attract a man by wearing the right clothes, exuding confidence, and employing coyness when necessary. There are no surprises in how the story plays out. It was a cute story but supremely superficial. C