REVIEW: Secrets of a Scandalous Bride by Sophia Nash 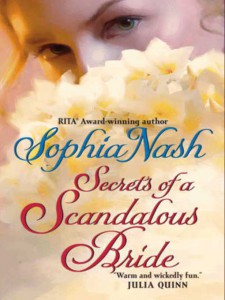 I think this is the first book I’ve read of yours and I read it because of the excerpt that was posted. The excerpt was intriguing.   Elizabeth Ashburton was attending a wedding of one of her closest friends at St. George’s.   Danger presents itself at the wedding and her only course of escape leads her directly into the arms of Rowland Manning, the bastard half brother of the groom.

Rowland is on the verge of ruin. He had been contracted by the calvary to provide in excess of eight hundred horses for the war against France.   Now that Napoleon is in exile and the war is over, Rowland is stuck with the stabling of 800 horses and no buyer.   If he doesn’t rid himself of these horses, Rowland will descend to poverty, a state which he had vowed never to revisit.

The   conflict that is set up requires Rowland to choose poverty and the love of Elizabeth over that of the finalized sale of his horses.   The story plays loose with history.   The villain of the set is one General Pymm who is said to have delivered the gold eagles directly from Napoleon and is considered to be one of England’s famous war heroes.   Prinny is set to award a duchy on General Pymm and Pymm is determined that Elizabeth will be by his side when this honor is bestowed.

Elizabeth is just as determined to avoid Pymm as she believes he is responsible for her father’s death in a battle at Badajoz.   (Very David and Bathsheba like here).   She feels safe at Rowland’s despite him pawing at her, locking her in a dank storeroom, demanding that she assist the stable cook, and never once treating her with any dignity.   Elizabeth whips up a meal for some thirty eight men in under two hours and after one well cooked meal, the stable hands at Rowland’s place are now her loyal followers.    Of course Elizabeth is irresistible to Rowland and vice versa.

This book appeared to be the last of a series or connected books pertaining to a group of widows.   There is a complete chapter toward the end of the story that provides closure to a number of relationships.   The problem is that this is my first entry to the series and I felt that there was a number of nuances that I was missing.   There were references to Rowland’s past as well, the death of his brother and sister, which may have been more fully fleshed out in previous books.

Another example, this group of widows is supposed to be fast friends, lasting over a long period of time (although how long and how they know each other isn’t revealed in this book). Yet there was little evidence of the strength of the connections.   The connections revolved largely around the hero and his acquaintances which happened to be the husbands of the band of widows.   It was very male focused.

Elizabeth seemed dim witted at times.   She’s trying to avoid being caught by a famous personage of the upper 10,000 yet she attends and stands up at one of the most heralded weddings and at the most famous wedding site: St. George’s thinking that she’ll never be caught here.   She relies on the largesse of a man she doesn’t know and who treats her poorly.   Her plans to seek refuge from the villain are never fully formed.    Why she would seek the aid of Rowland when she had many a moneyed and powerful connection through her friend’s marriages is really beyond me.   Well, it wasn’t beyond me. It was obvious that Rowland and Elizabeth be thrown together for the romance but the overt manipulation was annoying.

Rowland’s language veered from coarse to cultured with no consistent reason, i.e., when he forgot himself or when he became excited, just in general he would be saying “bloody gawdamned devil of a miracle” (intentionally misspelled to portray his uncultured speak?) and then he would be spouting off differently with his “shall nots”.

There were points in which the story could have been deepened, challenged, but these were whisked away without any inspection such as Rowland’s possible past as a prostitue.   Given that his mother and sister apparently died because of prostitution, wouldn’t his own activity caused him some agnst?   What was the point of bringing up these dark periods if they weren’t intrical to the storyline, character development?   It was like a dandy dressed up with a sword, all affectation and no bite.

There were times in which I enjoyed the prose and I felt that there were elements of likeability. Rowland was raised in poverty. His mother’s credo was “forget not, want not”.   Rowland lived a life of austerity so that he would never be impoverished again. But how about a downpayment for those horses?   How about a contingent plan?   Not much of a brilliant business man was Rowland.   I wonder how I would have felt if I had read the other books in the series.   Maybe more grateful and less critical?   C

→ Jane
Previous article: Ellora’s Cave Fails to Show Up, Respond to Discovery in Lawsuit
Next Post: Friday End of the Day Links: GetGlue Is Pretty Cool