The title of your book, Secrets of a Bollywood Marriage, both attracted me and put me off a bit. It signalled a marriage-in-trouble story (a trope I love) but also a Bollywood setting (which I’m starting to get tired of). Nevertheless, I was curious to see what a Presents author would do with a Bollywood book, so I dove in. 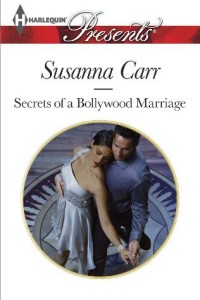 Dev and Tina have been separated for a year, estranged in the aftermath of Tina’s miscarriage. Tina returns to Mumbai from the US end their marriage for good, but Dev will only agree to divorce proceedings if she is willing to continue as his wife while he negotiates with investors to obtain a new infusion of cash for the family film business. Tina reluctantly agrees because she needs to work in order to continue to support her mother and sister, and since she’s nowhere near the Bollywood heavyweight Dev is, being on good terms with him is good for her career.

This is a pretty standard setup (rich, powerful hero essentially blackmails heroine into a relationship), so what makes a difference is the execution. I like the first third of this book quite a bit. The setting was well depicted and while Tina and Dev did the usual estranged-lovers’ love-hate dance, Tina in particular felt like a well realized character. I find it hard to believe she came from the slums of Mumbai and married Dev, but that’s a type of Slumdog Millionaire-inspired license I can live with. I believed in their relationship and that they had been happy in the past, and I thought the details that emphasized the Indian setting were well integrated (although maybe that’s because this is pretty much my memory of chewing paan):

“Are you sure you don’t want to go to a restaurant?” Dev said as he placed a protective arm on the small of her back as a barefoot child with spindly arms and legs ran past them. “There’s a really good one on the other side of Mumbai.”

Other side. She knew he really meant to say the good side. The glittery and elite world where he ruled. The exclusive neighborhoods that she still couldn’t enter if she didn’t have the Arjun name and clout behind her.

“Those restaurants are not authentic. They make appetizers and snacks that are inspired by chaat,” she declared with her nose in the air. “You have to get chaat from the streets. Tell me you’ve eaten something from these wallas at some point in your life.”

He shook his head. “My family considered it unhygienic.”

“That just adds to the taste,” she teased him. “I can’t believe you haven’t been to a bazaar or eaten street food. You need to see more of Mumbai.”

“I was born and raised here,” he reminded her.

“Not my Mumbai.” She flashed a smile of thanks to the paanwalla as she accepted the stuffed [betel] leaf that lay on a small square of tin foil. As Dev paid with rupees, Tina tucked the treat in her mouth, resting it between her teeth and the inside of her cheek. She tilted her head back and moaned. “Ah, now that tastes like home.”

Once Tina returns to their marital home and begins living with Dev, however, the story loses steam. There’s not much conflict to keep them apart. An actress who stars with Dev, Dev’s mother, and Dev’s close friend appear briefly and then mostly fade away. Tina’s mother, who is quite the ambitious stage mother and harpy, shows up and causes some trouble but then isn’t around much. Tina’s sister is barely there, and Dev’s mother, who dislikes Tina because of her modest background, shows up, glowers, and then isn’t heard from again. These all felt like missed opportunities to me. Unlike, say the Mills & Boon India books I’ve reviewed, the author doesn’t do much with the potential conflicts that Indian culture offers.

Instead, we basically see Tina and Dev rehashing the previous year, especially Dev’s resentment at what he considers Tina’s abandonment of him and their marriage. Tina insists that she’s not coming back to him even though she clearly still has feelings for him. The miscarriage is mostly treated with respect, but the choices the characters and the authors make in the last third of the novel diminished that somewhat, and the ending is just too fast and not sufficiently foreshadowed. And I really could have done without the epilogue.

I did appreciate that the Bollywood setting was used in a way that emphasized the workplace and business aspects. I felt as if Tina’s career was important to her, and the details about the film industry felt authentic to me (I don’t know enough to know if they are, but they felt real). I especially liked that Tina wasn’t a huge star but rather a working actress. Had the marriage in trouble plotline been more richly developed and the relevant Indian cultural aspects been utilized to a greater degree, this would have been a powerful reading experience. As it was, I started out really engaged and then became frustrated as the story progressed. Grade: C