This is my first time I’ve read a book of yours.   Second Chance Dad caught my eye because I am a fan of the second chance theme.   More of the story seemed centered around the second chances of Hanna Rosser, a recently divorced mother of Ashton, a sixth grade boy with growing pains.   Hanna has spent that last several years being a mom but when her corporate lawyer husband takes up with a 22 year old law student, Hanna decides to move back to her home town of Marble Falls and open a bookstore with her mother. 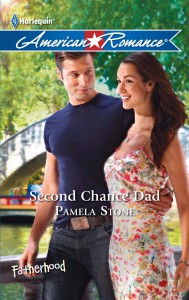 Ashton immediately makes friends with Mackenzie Keegan, a tomboy whose father lets her run free within Marble Falls.   Vince Keegan lost his son and his wife nine years ago and moved to Marble Falls where his deceased wife’s family lived.   There he recovered from his loss and mastered the skill of being a single parent.

Initially, I was irritated with how the hero was presented because I felt the reader was being presented with a valuation of which parenting style was better.   Hanna was more “uptight” and strict.   She didn’t want Ashton riding on the back of Mackenzie’s motorized bicycle.   She made Ashton do his homework prior to going out and playing.   She wants her son to wear a life vest when he goes tubing.   She doesn’t want to get a pet for her kid no matter how much he might enjoy them.   Of course, Vince is just the opposite.   And Ashton was miserable and acting out.

Mackenzie, on the other hand, was precocious.   A smart acting (and smart mouthed kid) who could crew her own boat, control a motorized bicycle, and single handedly defeat bullies.   Plus, she and her dad had a near perfect relationship.

Hanna and Ashton had bigger problems that her parenting style.   Her husband left her for a college student, she has lost her independence and had to move in with her mother, Ashton’s suffering from a loss of security, the break up of his family, and the sudden change in his environment.   Showing Hanna’s struggle to be a parent as a stylistic choice rather than relating to the divorce and moving back home seemed to unduly canonize Vince.

When Vince was suddenly interested in Hanna, I wondered why.   Because she was good looking?   At the point in which he decides to pursue Hanna, the extent of his interactions with her were her making his kid cry and meeting in the principal’s office acting starchy.

About the half way mark, I felt the story turned away from whom was the better parent to a conflict that felt very authentic to me.   Vince was ready to have a partner in his life. He realized that as much as he loved his daughter and his in-laws, he had given up dreams of his own and there was a space in his life that longed for a partner.   Hanna, on the other hand, is still feeling the aftershocks of her divorce. She likes Vince, a lot, but she’s very uncertain.   Further, Hanna felt like Vince’s in laws weren’t ready to give Vince over to Hanna.

There were a number of small jealousies exhibited by Vince’s daughter, Vince’s mother in law, and these provided a slightly different but very realistic barrier to Hanna and Vince’s blossoming romance.

And, in an unusual romance move, both Vince and Hanna weren’t totally in love with the small town.   Hanna missed her life in Dallas.   Vince had longed to travel all over the world as a bridge engineer.   Their romance was often impeded by the small town gossip.   I had initially thought that this would be a romance that would praise the small town life over all else (as is often the case) but it wasn’t.   Yay!

I did like the sexual tension and the tender way in which their loving was played out although some of the explicitness seemed forced, as if this was uncomfortable to write.   I would definitely read another Stone but I liked the second half of this book far more than the first half.   C