You received a glowing endorsement from Courtney Milan and I had to try this book out. While I am not sorry I read it, perhaps heightened expectations left me with a disappointed feeling during the book. I think, too, the book was a bit too lighthearted for me. I seem to be enjoying the darker, agnsty historicals more these days. 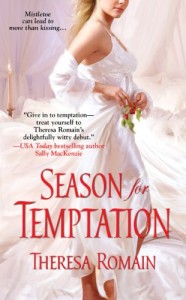 James, Viscount Matheson, comes to visit his new fiancée’s family and while there feels an incredible pull toward his fiancée’s sister, Julia Herington. James decided it was time for him to marry and he runs into Louisa hiding in a library at a ball. They strike up a conversation and James believes that Louisa would be a perfect match for him.  Louisa quickly agrees to his marriage proposal.  Now they are endeavoring to get to know one another better.

Nothing much seems to happen for the first half. James visits his fiancée’s family. Julia runs around interrupting people and cursing while James wonders at his physical and emotional attraction toward Julia. Louis is a nearly silent spectre.

A storytelling technique is utilized here to create mystery about characters’ motivations.  We know that James had to get married soon but we don’t know the reason why.  We know that Louisa is anxious about being married but we don’t know why she accepted James’ proposal.  When the reasons are revealed later in the story, they make sense, but it was hard to understand the actions of the characters when the motivations were completely hidden.

I also found Julia a bit too much of a conventional romance heroine. She’s in charge of her family’s household despite being of young age (and despite having a living mother, father, and close in age stepsister). She’s quirky. She careens around her home and curses. She says whatever comes into her head. Voila. Perfect for James, the hero. The plan to find Julia a spouse conveniently leads James to jealousy because no man was right for Julia in his eyes (except himself).

I kept envisioning Julia as this excitable terrier, always running around, yipping, and chewing holes through dresses. The introduction of the bawdy, irascible aunt who reminded me a bit of Dolly in Hello, Dolly, was thrown in for humor purposes and to serve as a foil for James’ uptight mother. I wished for more depth from everyone.  The technique of the delayed reveal actually made the characters superficial and unrelatable.  For instance, Louisa’s initially stated cynicism regarding courtship and marriage seemed at odds with her mother’s happy marriage to Julia’s father and her being raised in a loving family. Later, we find out that her earlier feelings were the result of misery and true discomfort at being part of society.  If I had known this earlier on, perhaps her actions would have been viewed differently.

The other thing I found odd was that so much time was spent showing James and Julia spending time alone and talking and very little time showing James and Louisa together. I understand that this was to show us the connection that Julia and James had, but whenever there is a severing of an existing relationship, a promise between people of marriage, I admit to feeling uneasy. That uneasiness stayed with me and granted it stayed with James and Julia, but my discomfort over the situation remained. Why were the two spending so much time together? Why did Louisa appear so nervous of James? Why did James have these salacious thoughts about Julia? I mean, I know the answer is because Louisa doesn’t really want to marry James and James must show that his soul mate is Julia, right away, but because of his promise toward Louisa, I was disturbed by his feelings and his actions:

Louisa bit her lip as she considered, then admitted, “If we marry soon, I shall have to sponsor Julia during her season next spring.”

This seemed like a total non sequitur to James, but he tried to respond as he thought Louisa would expect him to.

“I think that would be delightful. You could begin your life as a London hostess with one of your favorite family connections.”

His groin tightened. Delightful. Julia, in his house, nearby always, saucy and willing.

Oh, yes. And under his wife’s supervision. The vision popped as quickly as a soap bubble.

There is a definite tinge of infidelity that swirls around the forbidden love of Julia and James, even if Louisa did not love James, he did not know of her feelings and his actions could have caused a huge rift between Julia and Louisa not to mention cause real conflict and further disgrace for his own family.  Perhaps I was to see this as James’ being swept away by passion.

The first half of the story was all undone by the second half of the story and while that might be a technique that works for some readers, it didn’t work for me. It kept me distanced from the characters, their romance, and their emotional struggles. From a distance, I could see what I should have been feeling during the book: longing for the forbidden lovers to find each other, sadness at characters’ inabilities to overcome their insecurities, enjoyment that true love would triumph. Knowing, however, isn’t the same as being in the moment.

I think that readers who enjoy Julia Quinn would enjoy this book. There is quite a bit of heart to the story, but it never resonated with me. C