REVIEW: Rush Me by Allison Parr

I get the sense from the various internet reviews that people either love this book or hate it. I fall into the latter category. It’s not that I didn’t hate it so much as I wasn’t convinced at the end of the story that the two protagonists actually belonged together. 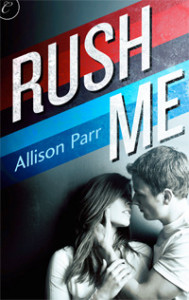 It’s sold as a New Adult book by Carina Press, but it doesn’t fit my personal definition. Instead, the heroine is a post-graduate working as an unpaid intern at a publishing house.  She is wandering around New York City one night and stumbles into a party being held at the home of Ryan Carter, the quarterback for an NFL team in NYC.  Rachel Hamilton knows nothing about football (or so she says) and doesn’t recognize either the players or the team name and definitely does not catch that Ryan is the quarterback.

I had a hard time swallowing this.  I would venture to say that nearly everyone in NYC knows who the Jets or Giants are, enough so that if the name was mentioned they would associate it with a sports team.  Rachel is so oblivious, however, that the team name makes her think of animals rather than football.  As if all these hard bodied men were into the zoo or something?  Later in the book, Rachel acknowledges that her friends are fans of the Patriots, the football team of her hometown.  This only ratchets up the unbelievability of the meet cute.

Rachel and Ryan are opposites.  Rachel prizes intellectual and literary endeavors and looks down on Ryan for using his body to earn a lot of money. She immediately presumes that Ryan is merely a dumb jock and insults him at nearly every turn.  Ryan isn’t much better.  He comes on to Rachel, assuming she is a groupie, and returns her insults with his own.  Rachel has zero interest in football and I struggle to understand how someone who hates football would even want to be with someone whose life will be consumed with the sport for some time.  I think one reason I struggled with Rachel is she exudes this East Coast snobbery toward what people like to call the flyover state – always colored with disdain. I live in a flyover state and we aren’t really as backward and dumb and unsophisticated as we are made out to be. My reaction to this book may have been more about my own defensiveness here.

“What?” The note in his voice made me defensive. “If you’re meeting all my friends and family, don’t you think I should get to meet yours?”

“You’ve already met all my friends.”
“Ryan—”
He stopped and sighed, reaching up to tousle his hair. Cleopatra’s Needle towered up

behind him, easily visible through the sparse branches. “Look, Rach, they’re just not— cosmopolitan—enough for you. You’d spend your entire time making fun of the farm, and the trackers, and the clothes—hell, you’d make fun of the entire state.”

He raised his brows in disbelief. “If you saw a guy in a flannel shirt riding a tractor and smoking tobacco, you wouldn’t snicker to yourself?”

Maybe. A little bit. I tried to joke, “But I would know it was wrong.”

Apparently that had been the wrong thing to say, since Ryan snorted. “Yeah, there’s no way you’re meeting my family.”

One of the best parts of the story is Rachel’s connection with a rookie teammate, Abe, who is Jewish.  Rachel is a half-hearted Jew but together they put on a few Jewish holiday meals for Ryan’s team.  In those scenes my animosity toward Rachel subsided and I enjoyed her interactions with Abe and her rediscovery of her faith.   I know I was supposed to see that Rachel came around and set her snobbery aside (she promised to attend games, met his family and didn’t make fun of them), but I never warmed up to her.  Ryan kind of faded into the background for me because I was so focused on Rachel.  He had his share of really crude moments toward Rachel which made me wonder wherein the attraction lay.

My reaction to this book is two fold. First, I didn’t like or connect to the characters. I thought Rachel was a real bitch and Ryan an asshole.  Second, I really enjoyed the author’s voice and would read her again. But Rush Me didn’t work even though I love football stories and love this younger contemporary romance setting.  C

→ Jane
Previous article: REVIEW: Turbulence by Jordan Castillo Price
Next Post: Thursday News: News is bad for you, David Mamet to self publish, not so horrific paper crafts