REVIEW: Rules of the Game by Sandy James

“Kathryn West has it all–she’s a confident, bestselling author living it up in New York City. Too bad she doesn’t actually exist, and is only timid Maddie Sawyer’s pseudonym. Determined to attend her high school reunion with a man right out of one of her racy romance novels, she plots to find a sexy bad boy who’s up to Kathryn’s standards.

She finds Mr. Perfect shooting pool in a biker bar. He’s a blue-collar hunk who just happens to look great in leather. But the mysterious Scott Brady has some rules of his own: he won’t agree to her deal unless she poses as his girlfriend in front of his family and friends first.

As the reunion nears, Maddie tries to maintain her carefree façade, knowing she’ll soon face some old ghosts. She’s torn between her growing attraction to Scott and the nagging feeling that he’s hiding something important. Will she still want him when she finds out his secret? What about when he discovers hers?”

I was interested in this book for a couple of reasons. First it sounded like it could be cute fun. Also, it seemed like Maddie had made the break from Small Hometown to Big City and was lovin’ it. Yeah, and the bad boy too. But….but…but…

For first 60 pages – where’s the conflict? Maddie and Scott seem to fall into insta-love. He’s freaken perfect – handsome, rugged, loves her pets, plays well with others, looks hot, has manners, loves and raised his siblings, is willing to delay sexual gratification, has endless patience teaching Maddie to drive his beloved “still in restoration” car (a 1967 Mustang so I know this guy is serious about her) and speaks in grammatically correct sentences.. what’s not to love? Clone this man and make a fortune. But where’s the conflict aside from Maddie wondering what he does to earn a living? 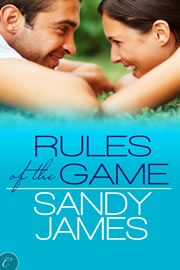 Then, I wanted conflict and, suddenly! I got it. Tons of it dropped on my head and Scott’s. First Maddie’s skeleton-in-the-form-of-an-asshole high school attacker appears in the picture and then – an even bigger bombshell – the result of that attack. Now I’m swimming in all the conflict and, once again, Scott is almost too good to be true. Sure I’d love a guy like this if I were in Maddie’s shoes right now but Scott is almost eerily perfect, close to robotically so. His only faults are snoring too loudly and (initially) his profession. Yeah, he sounds great on paper but that’s just it – he doesn’t sound real. Even unconditional love givers have a few faults. He even says “I love you” first. What a guy.

I’m not sure it makes sense to me that Maddie is so anxious to go to her class reunion that she goes to the trouble of finding a stand-in bad boy boyfriend and then that she’s having a near panic attack at the thought of going and then almost has one when she gets there and sees the instigator of her teenage trauma. Why go back at all? Yet the next night she confronts this person with righteous anger. Too fast a turn around for someone with her emotional baggage? The way she eventually deals with him and gets him out of her life is smart fast thinking. You do mention that it took Maddie a long time to allow physical intimacy in her life which makes sense given what happened to her.

At one point Maddie says of herself that “You’re a fucking idiot.” Yep, that about covers it. Maddie truly is a heroine who has a ton of growth to go through before getting her HEA. On the one hand, I applaud your skill in making her such a fuck-up who needs to change and grow. On the other hand, there were plenty of places in the story were I wanted to smack her or shake her or both. Scott truly is a forgiving man. I can forgive his, almost, lone comment to Maddie to “Grow up.” Maddie’s primary reaction to conflict or trouble is to run. She runs from Craig, she runs from Eli, she turns off her phone and basically runs from her mother’s calls and then later on she runs from Scott’s calls. Maddie does a runner a lot of times. And she finally admits to herself that her relocation to NYC years ago was running from her old life. I think, I hope, that by the end of the book, she’s realized this trait and has fixed it.

Maddie’s loathing of defense lawyers might sound extreme but – given how important her brother was to her, and that he was killed when she was at a very impressionable age and that she’s nurtured this feeling for years, I can understand it. But, yes there always has to be one with me, hasn’t she encountered other lawyers over the years to tone down her anger? Even if they’re not defense lawyers…

The way Maddie ultimately bonds with Eli is in keeping with their mutual interest in art and being creative. Maddie’s confusion over how to deal with Eli suddenly being in her life seems realistic for someone who hasn’t seen him in years and has to learn how to relate. Eli ends up playing a pivotal role in getting Maddie to reassess how she feels about what Scott does and begin to see the shades of gray in life.

Maddie starts out wanting to be her pen name alter ego Kathryn West – from the blurb, I had imagined this would be a more slapstick type book but after Maddie’s initial quest for a bad boy to go with her to the reunion, the whole West thing was dropped until almost the end of the book where it does figure into Maddie’s change. Still, for it being so prominent a part of the book description – why the drop for so long? I began the book thinking I was getting mainly lighthearted and flirty fun. Turns out there’s a bunch more angst which is okay but required a mental readjustment from me as things got more involved. In the end, Maddie does seem like she’s on the road to getting over her past and welcoming her future. But I just wish that I could believe that her Mr. Perfect wasn’t a life sized Ken doll. C