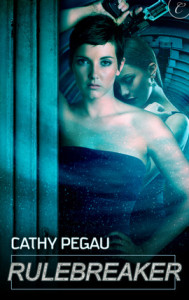 Smash-and-grab thieving doesn’t lend itself to getting chummy with the victims, and Liv hasn’t met anyone on the mining colony of Nevarro worth knowing, anyway. So it’s easy to follow her Rules.

Until her ex, Tonio, shows up with an invitation to join him on the job of a lifetime.

Until Zia Talbot, the woman she’s supposed to deceive, turns Liv’s expectations upside down in a way no woman ever has.

But to make things work with Zia, Liv has to do more than break her Rules, and the stakes are higher than just a broken heart…”

I decided to try a new-to-me author and SF, a genre I don’t normally pick, in order to mix up my recent reading. The fact that the romance is f/f was an added bonus as I’m also trying to discover and read more of this genre as well. “Rulebreaker” worked well enough for me that I’m going to go on to the next book in this series but there were also elements that I wished were expanded more than they were.

There is just enough world building to know it’s the future and not on earth but the descriptions and terms used didn’t get overboard or distracting. Which could be good or bad depending on why someone wants to read the novel. If some hints and triggers of future time were removed, it could just as easily take place here and now. People drink coffee, go to beauty salons, deal with mass transit and are still stuck with Human Resource Departments. That last bit is more than a little depressing.

The dry, deadpan humor is just the type I like. Liv is fun to listen to and I enjoyed seeing things from her POV as well. But she’s far from perfect – either as a person or as an observer as she sometimes misses little things like why wouldn’t their criminal associate bug the room Liv and Tonio are staying in and did she really think she’d keep her mother’s identity a secret? She’s a tough person, though she does have her Achilles’ heel, but she’s also loyal to those whom she loves. I think this balances out the fact that she’s an outright thief and wonderful liar. Hooray for an occasional heroine who isn’t a goody-two-shoes.

True to its title, “Rulebreaker” has lots of conflict and tension – business, family, law and sexual. Liv and Tonio’s marriage ended badly yet they have to find a way to work together to pull off this deal. After she was basically kicked out at age 16 by her grifter mother, Liv doesn’t welcome Sabine back with open arms yet Sabine’s input and knowledge might be just what is needed to get the information required. The mega corporation the group is attempting to blackmail might be about to revolutionize the industry or hiding a black secret that does need to be uncovered. Liv does hint that she’s been sexually attracted to women before though obviously she’s never acted on it.

It’s a well written, emotionally engaging, tight narrative which doesn’t wander all over the place. But the story works better as corporate espionage than as a romance. I actually like that the kind of information Liv is searching for isn’t revealed as it kept me interested in not only if and how Liv would get it but also in what it actually is and how the criminals would use it. The nuts and bolts of how Liv goes about her job and her search sound realistic and her near misses with her boss and others added tension and stretched nerves. And that was before a final twist which cranks up the danger to Liv from both sides of the law.

If the book had focused only on suspense, my grade would be higher but it is also supposed to be Liv falling for her boss, Zia. Their relationship starts quietly with questioning glances then touches which get more and more heated then – suddenly – BAM! it’s sex – albeit tender – and then whoosh! into the “I Love Yous.” Sorry but the pace was just too fast for me to completely buy into not only a HEA but one with a gender Liv hasn’t spent a lot of time contemplating sexually before.

As I said, I do want to go back and pick up the novella that prefaces this book and already have the full length novel that follows but while the espionage kept me interested here, the romance let me down. C