I really find the guy on the cover attractive and I liked book 1, Rule, despite the fact that grammar was optional. Yet I couldn’t make it past the second chapter and sadly I had the same problem with Rome. Everything about this book’s package appealed to me. Aside from the cover (did I mention I like the cover), I was intrigued by the wounded warrior and the tattoo artist girlfriend. 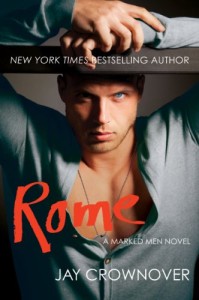 I even liked the opening with Cora not falling for the brooding warrior but I didn’t find Rome to be intriguing in any fashion. He was very surly and I guess I was supposed to immediately feel sorry for him because he has PTSD – it says so right in the blurb – but I needed that in the text. His point of view seemed very emo, as well, and not very well differentiated from the heroine’s POV. He notices the barkeep’s “charcoal eyes” for example. He told us that Cora’s eyes “were unique in themselves, but the fact that whatever she was feeling literally ran from one color to the next was fascinating.”

Further, if Rome really did have PTSD (and it said so in the blurb) then no one really gave him enough slack. I hadn’t seen enough of his being an asshole to anyone other than messing up some party. I know other readers enjoyed seeing Rule stand up to his brother Rome to protect Rule’s girlfriend but the asskicking came out of nowhere in its intensity. Ditto for the dressing down he got from his “sister” Shaw.

The concept of the warrior trying to reintegrate into a civilian world was a good one. Rome’s job was to be everyone’s caretaker and problem solver but his friends and family have all grown up without him. (Although how he took care of everyone since he was enlisted from the age of 18 – 28 and the book begins when he separates, I’m not sure).

The couple has unprotected sex even though both of them view this hookup as temporary. I would have thought Cora, at least, who was looking for Mr. Right would be interested in protecting herself while enjoying Mr. Wrong, physically. While it was necessary for the plot, there wasn’t a good explanation for it in the book so the two seemed stupid and foolish and given that they didn’t much like each other, the “carried away by passion” didn’t fit very well either.

Their nonchalant attitude toward unprotected sex seemed crazy to me particularly when Cora was looking for Mr. Right. “What if the result is a baby?” “Then we’ll dealt with it.” What is this? The nineteenth century??????!!!!!

I wished more of the story had focused on Cora and Rome. About 70 pages in Rome began to take shape for me as a character but just when I felt I was getting to know Cora and Rome, other characters from past books or future books would take center stage. This happens in the epilogue as well. The story ends rather abruptly and the epilogue is the set up for another book.

The cast in this book is really large. There’s the entire crew of Marked (Rule, Shaw, Rowdy) including Nash and his uncle who owns the shop. Nash’s book is constantly on the peripheal of this story and had zero to do with the Cora and Rome conflict. You could have eliminated that part and Rome would have read exactly the same. There’s Brite, the grizzled Marine/Bar owner, who provides pithy statements to Rome. “Grief is a hard mistress to have.” There’s Cora’s roommates – Asa, Ayden and Ayden’s boyfriend, Jet. It was hard to keep track of everyone.

Cora’s POV scenes were the best. Some of Rome’s came off to cheesy (and too similar to Cora’s) for me to enjoy entirely. Some of the reviews found Cora abrasive but I didn’t get that sense at all. She wanted to fall for the right guy who wouldn’t hurt her and she was envious of her friends pairing off. She had a confidence in herself that I don’t see a ton of in other New Adult heroines. At one point when they are about to have sex again, Cora says “Don’t be scared, Captain No-Fun, we got this.” And I laughed out loud.

There were still sentences that I had to read twice or more to make sense of because of sentence structure and odd word choices.

“When I was overseas there had been a female intelligence officer who’d been down to be friends with benefits whenever we were in the same place at the same time.”

Or “I barely finished my senior year and the damaged had a lasting effect on my GPA. I could go back and finish fairly easily but …” (If she barely finished, then she did finish)

Or “I probably outranked him in the reality of things.”

Or “However, I had promised Rule I would get it on lock, so that’s what I was going to do.”

It’s too bad that William Morrow didn’t serve this author better but I’m giving this a C because the issue of unprotected sex really, really bothered me combined with the technical issues. The story took too long to unfold and then kind of chased its way to the ending and the “I love yous” came a little early.