REVIEW: Return to Me by Justina Chen 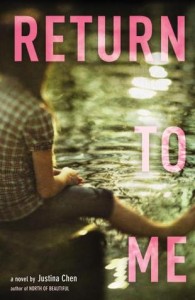 I’m a huge fan of your previous novels. I loved Girl Overboard and I adored the prose and language in North of Beautiful. It’s been a couple years since you last published a novel, and I definitely felt that lack — particularly since I think contemporary YA has come into its own the past few years. When I saw that you had a new book out, to say I was excited is an understatement.

Newly graduated from high school, Rebecca Muir is preparing for her freshman year at Columbia’s School of Architecture. But things start going awry when her mother makes the announcement that the rest of the family will be following her, moving from their home in the Pacific Northwest to New Jersey. Then Rebecca receives some unexpected advice from her father, who tells her that trying to maintain a long distance relationship with her rising senior boyfriend, Jackson, might not be so ridiculous. Considering the fact that he, along with her mother and two best friends, had been encouraging her to break up with him just a couple weeks before, this confuses her immensely.

Thanks to her mother’s amazing organizational abilities, the actual cross-country move goes off without a hitch. But that’s the only good news. Soon after their arrival in New Jersey, the bombshell is dropped. Rebecca’s father has been having an affair for several months.

The revelation sends Rebecca’s life into a tailspin. The various fault lines in her family reach the breaking point and come to light. She realizes that while she dreams of becoming architect, the path of Columbia, corporate design, and joining the Muir family’s prestigious real estate firm is her father’s dream, not hers. So when her maternal grandfather comes to collect his daughter and grandchildren, to bring them to Hawai’i to heal, Rebecca embarks on a summer quest to find herself and learn what she truly wants.

I always thought that the strength of your writing rests in the exploration of relationships between female family members: sisters, yes, but especially mothers and daughters. How those relationships manifest in the context of family and within the confines of the traditional roles: mother, daughter, wife. That is where I’ve always believed your books excelled.

I don’t think it’s inaccurate to say that crappy fathers have also figured prominently in your previous novels. North of Beautiful portrayed a father made abusive by the heavy shadow of his professional, career-ending failure. In Girl Overboard, it’s the intersection of cultural expectations and heavy parental pressure about joining the extremely lucrative family business crashing against a dream to follow her own path. There have always been reasons behind the father’s crappy behavior, not to explain it away or excuse it but to add nuance and subtlety.

Return to Me lacks that. As best as I can tell, the father’s affair was the result of a midlife crisis. True, he felt suffocated but his life was a result of his own making. He essentially forced his wife into the role of being the parental enforcer, the “bad cop,” because he didn’t want to do it himself, and then he gets mad when Rebecca’s mother embraced that role fully. It reeks of immaturity and I could not get over how much of an asshole he was about it. He wrecked his family’s life and acted like Rebecca and his brother would accept it without missing a step, flaunting his affair in front of the kids, expecting that it would have no impact on their relationship. I’m not denying that there are assholes who’d do this in real life. Of course there are. But within the context of a constructed narrative, I expect more layers than “Dad’s an ass.”

And because a large part of the beginning was focused on this aspect, it took me a while to get into the novel. I’ve come to expect a certain amount of self-discovery and female empowerment from your novels. It’s one of my favorite things. But that doesn’t really happen until later, and I think that hurt my enjoyment of the novel when a large chunk of the book is devoted to the dad’s shitty behavior and how Rebecca, her mother and brother continue to be shocked by his shitty behavior.

There’s a tiny paranormal element in the book. The women of Rebecca’s family are gifted with a certain degree of precognition. This sounds lovely in theory but let’s face it: relationships can become easily strained when you can see all the bad things that will come to pass — affairs, deaths, and the like. As a result, there’s a “curse” upon them: no woman has ever had a relationship survive.

While I do like the paranormal and supernatural, I found this to be the weakest aspect of the book. There was really no need for it. It added nothing to the story. Rebecca’s grandmother could have led her world tours without it. Rebecca could have had an impending sense of doom about the cross-country move without it because let’s face it, there were enough non-paranormal hints that her father was having an affair.

That said, the last parts of the book where Rebecca finds her dream and pursues it with fearless abandon, the union of her talents with that of her mother and grandmother, was excellent. I honestly would have loved to have read that story — the actualization and struggles of the “impractical” dream, the bravery required to walk outside the safe corporate lines to do something visionary. In some ways, I wish the story had been the tale of Rebecca’s gap year and the doubts that arise from making that choice in a society where going to college immediately after high school graduation has become almost expected. But that wasn’t the story this book intended to tell, and I regret that though I shouldn’t.

I loved your previous novels so much that one mediocre novel isn’t enough to turn me off any future ones. There’s always the chance my reading preferences shifted between North of Beautiful and Return to Me but I don’t actually think that’s the reason behind my dissatisfaction. I can only hope that your next novel will work better for me. C