Vampire angels must be a trend now in paranormal romance. Who knew? Much like Jane with that selection, I’m not sure why I picked up this book and read it. Angels don’t do it for me. And yet, I managed to finish it despite my ambivalence. Maybe I have a previously unknown-to-me fondness for vampire angels! 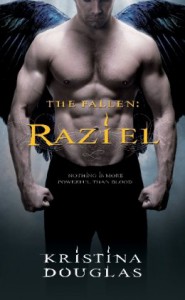 Allie Watson is a writer of snarky Biblical murder mysteries. Not the most common occupation but not the most unusual either. On her way to a meeting with her editor, she has a close encounter with a bus. So close, in fact, that she ends up a bloody pancake on the street. If she happened to have been helped along by the very attractive man in front of her in the hot dog line, well, that would be the lead-in our plot.

Raziel is a fallen angel. Cursed by God, he must partake of blood and can no longer bear the touch of fire. Raziel and his fellow fallen angels live in a sort of sanctuary, away from their age-old enemies, the Nephilim. Originally, the Nephilim were heavenly warriors sent after the angels when they fell. But the Nephilim also fell and instead of being cursed with a thirst for blood, they ended up with an incessant hunger for flesh. It was after the Nephilim’s fall that God grew fed up with everything and abandoned mankind, leaving Uriel — the last remaining unfallen angel — to administer in his absence. The problem is that Uriel hates the Fallen and constantly schemes to find a way to destroy them forever.

Despite this preference, Uriel has given the Fallen the task of ushering the recently departed to the afterlife. Raziel is Allie’s escort but instead of heaven as previously expected, he finds that he’s taken her to hell. But for some reason unknown even to himself, Raziel literally saves her from the fiery pits and finds himself saddled with a woman he wants nothing to do with. After all, he’s sworn never to take another mate again — they make too convenient a target for Uriel’s attacks — and he finds Allie far too tempting for his own good. The question, though, is why Allie was slated to go to hell in the first place. Surely writing snarky Biblical murder mysteries wouldn’t warrant such a fate. Uriel may be humorless but it’s too minor an infraction, even for him. The answer to that question is a plot that will change the Fallen forever and usher in a new age for them.

It’s interesting to read this book shortly after Caris Roane’s Ascension. There are many similarities in terms of elements: angels with a penchant for blood, a mysterious woman tossed into their midst by fate, and a soulbond. But while Ascension‘s worldbuilding is very haphazard and nonsensical, Raziel takes a more methodical approach. I find I prefer the latter since I come from a fantasy reading background. I like it when worldbuilding holds up to scrutiny, especially in non-fantasy genre books. So I did ultimately appreciate the worldbuilding in Raziel but it took a few chapters for me to readjust and accept that while there were similarities, this was not a 100% transfer of angelic canon. I definitely can see how some readers might find it confusing because it does take a while for things to become clear.

What I found strange about this book is that there’s not a lot of plot when you stop to think about it. Allie is introduced to the world of the Fallen. The other angels want to get rid of her. Raziel and Sarah, the Source (a woman who donates blood to the fallen angels without mates), are the only people who argue in her favor. The barrier to their sanctuary is weakening and the Nephilim have found them. There’s a cursory mention of the Fallen looking for Lucifer, the original fallen angel, in order to free him and have him lead them in the war against Uriel. Except for the initial plot point in which Allie is killed and sent to hell, she actually doesn’t have a lot of impact on the plot until the end.

In fact, I’d argue that neither Allie nor Raziel affected the plot in any major way. A lot of it was instead driven by external factors, in which the couple would then have to react. I think I would have preferred a little more action on their part but I also realize that might be difficult to do when they spend the bulk of the novel in a house located in some other-dimensional sanctuary.

Despite the paranormal trappings, this is a story where the conflict rests between Allie and Raziel. Allie is trying to accept that she is dead and that she cannot return to her previous life. Raziel is struggling to keep his vow of not taking another mate even while he suspects Allie of being Uriel’s spy. But even then, I thought that the emotional conflict between them was not as immediate and intense as I’d expect. The book had an odd detached tone to it, which is doubly strange because the bulk of it is told in first person POV.

Speaking of which, I feel that I must warn readers that the book is told in alternating first person POV between Allie and Raziel, interspersed with third person narratives from a couple other characters. I personally don’t mind these sorts of narrative choices but I know they can be a major turn-off for some readers so I wanted to give a heads up.

There is, of course, the obligatory sequel-bait. I am not sure I actually liked how that subplot unfolded and concluded, even though the resolution tied into Allie’s storyline. It felt a little rammed in, so the characters involved were a bit too superficial for me. Of course, I also dislike the trope that was used, so perhaps that’s just my bias speaking. [spoiler effect=”blind”](Why is it always fridging?)[/spoiler] That said, most of the supporting characters were superficial and never really came to life, so maybe that’s not a fair criticism to level at this one particular subplot. Something happens at the end that should have hit me hard as a reader but failed to do so because I was not invested at all in the characters.

I wish I could say I enjoyed this book more. I did finish it and again, that says a lot considering my disinterest towards angels. But while all the pieces were there, it read so methodical to me that I felt like it was going down a list, checking off various points as the book progressed. I wouldn’t mind reading the next book in the series, but it’s not something I’d rush out and get. C