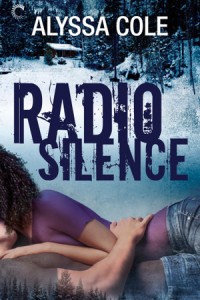 I love post apocalyptic, survival stories and when I saw several well known authors tweet about how much they loved this book, I couldn’t wait to try it.

Arden Highmore and her best friend, John, are living in New York when one winter day all electricity goes out. They begin a trek to north where John’s family owns a cabin and a grocery store. Because it is remote, Arden and John are hoping to not only find his family but safety.

While the setting is post apocalyptic, I felt that this was really a story driven by relationship conflict rather than external forces. The action is mild and the drama centers mostly on Arden’s attraction to John’s older brother, Gabriel, and the teenage sister Maggie who is tired of being cooped up in the cabin wondering what is going to happen to them.

Most post apocalyptic books have quite a bit of external conflict–or at least danger–and I didn’t feel any sense of urgency in Radio Silence. They had shelter, food, and water. While the fate of their parents was unknown, the three Seongs and Arden appeared to have the resources to survive for some time. The only real danger was presented in the very beginning (opening scene) and toward the end.

The large middle part of the book was Arden wondering why Gabriel, John’s older brother, was so gruff with her and then seeing the two of them act on their mutual attraction. After they start being more overt with their attraction, tension builds between the family members. The romantic conflict between Arden and Gabriel seemed to consist primarily of Gabriel being protective of his family and Arden being protective of herself. It’s a quieter sort of conflict.

Teenage sister Maggie confesses to a romance that was building with a boy over the internet. She’s fearful she might never have any romance stuck in the cabin with her brothers. John is largely supportive but he has conflicted feelings over losing his best friend to his brother.

The friendship between Arden and John was delightful. I adored their rapport and their support. John encouraged Arden to stretch beyond her boundaries, gently called her on behavioral tendencies that might be holding her back from finding true contentment, and celebrated Arden’s love even though it meant that he wasn’t the number one Seong in her life anymore. (That’s a pun waiting to happen).

Maggie, the teenager, was rendered pretty realistically. She was dramatic and moody and her impetuous actions were understandable. For the most part, each of the main characters felt very genuine except for Gabriel.

Gabriel was a mystery. He is described initially as a brooding silent type but later his personality changed. I guess you could chalk it up to Arden’s view of Gabriel changing but it felt that he was initially described as brooding and gruff because that worked better for the scenes/emotional conflict at the time. Gabriel didn’t come off as a cohesive character for me–not as much as John or Arden or even Maggie.

I actually liked John the “gaysain” the best and the little snippet at the end of the book previewing his romance was intriguing.

My major complaint about Radio Silence was the lack of tension. With the post-apocalyptic setting, I wanted something more that reading about the characters playing board games and learning to play guitar. C