I have to confess that if I hadn’t gotten an ARC of this book, I would never have read it. The cover is just so, well, 70s? I mean, there is definitely something about this cover that screams Miami Vice or Chips. Too bad the dude is not wearing a white nylon windbreaker.   But! You are the Jennifer Ashley who writes those amazing historicals and this book is about shifters which have become my latest hunt.   I know that I was taking a risk because I was jumping into the series at book 2 and frankly I wish I had read book 1 because there are definitely storylines begun in book 1 that carry over into this book and I wondered if I had missed some of the romance buildup between our two main protagonists. 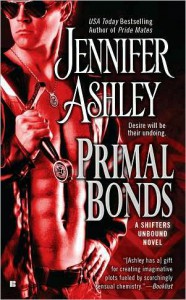 Andrea Gray is half Fae and half Lupine shifter.   She was raised in a lupine pack but because of her fae blood and her illegitimacy, she was treated as an outcast. Andrea is faced with mating with an abusive Lupine or leaving her back.   She appeals to her Aunt Glory. Glory petitions her pack leader, Liam Morrissey for permission to bring Andrea into their Pack.   Liam required Andrea to be mate claimed as an unmated women can cause dissension and in fighting amongst packmates.   Females are scarce and fertility is low.   Sean, his brother, agreed to mate claim Andrea, sight unseen.   A mate claim is simply a verbal commitment by one pack member that he would mate with another. All other males had to back off unless the woman rejected the mate claim.

Sean Morrissey is a “Collared Feline” who is the Guardian of his pack. As Guardian, Sean is responsible for using the Sword of the Guardian to conduct what are essentially mercy killings wherein he finishes off a dying pack member and uses the Sword to usher them into the afterlife.   It’s a painful and somber responsibility.

The world structure reminded me a little of Native Americans and reservations.   The shifters came into being as a result of Fae magic but when the Fae realized that the shifters were strong and could represent a threat, they became frightened. Ultimately, they worked with humans to contain the shifters by requiring the shifters to be collared. The collars control their ability to shift and keep them monitored (serving as a kind of geo locator).   Generally, shifters stay in their shifter towns, away from humans. They live and work in their shifter towns, noted as other by their collars.   Sean’s clan is attempting to overcome the fae infused magic of their collars but with gruesome effects so far.

While there is an overarching romantic thread between Andrea and Sean, the driving force behind the story is the world and the mystery elements injected such as Andrea’s Fae nature; the growing shifter rebellion; and the fight between the humans, the fae, and the Shifters.

What really wasn’t explained to me was why Sean would have mate claimed Andrea or if he did it just to allow her to move, when did he decide that he lusted/loved her?   I wondered if some of that was included in the first book.   Sean is the one that is calling Andrea love, dreaming of her, anticipating the consummation of their mate bond.   In the beginning of the story, it seemed like Sean was already in love with Andrea whereas we see Andrea fall in love with Sean over the course of the book.   It’s not that I found Andrea unloveable but I had wished I had seen the course of Sean’s emotional arc as well.

This isn’t a bad shifter romance, but I definitely don’t anticipate the next one like I do the historicals. I wonder if some of my problems with the book would have been answered if I read book 1 but I guess I shouldn’t have to read book 1 to get the full flavor of the romance between the main protagonists. I do think shifter fans will enjoy it. The story moves fast and has plenty of heat. C.