I read your debut novel, The Replacement, a couple years ago and loved it. I put your sophomore effort, The Space Between, on my list of books to check out but it never quite happened. Whoops. There are so many books out there; sometimes I lose track. But when I was offered the opportunity to review your new novel, Paper Valentine, I leapt at the chance. I’ve been in the mood for something darker.

Hannah Wagnor is one of the It Girls. Or rather, was. Things haven’t been the same since her best friend, and queen bee of the It Girls, died six months before. The other It Girls have moved on and while that sounds nice in theory, it’s not an option for Hannah. Because her dead best friend is haunting her. 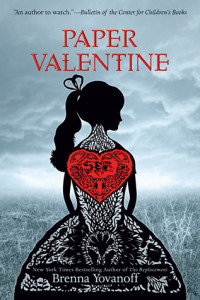 As if a ghost haunting weren’t enough, a series of murders sends Hannah’s hometown into a panic. These aren’t random killings. All of the victims are young girls on the verge of leaving childhood behind. And the killer has extremely morbid tendencies: he leaves tributes and offerings around the corpses, one of which is always a paper valentine.

When the ghosts of the murdered girls start haunting Hannah, she realizes it’s up to her to put the pieces together and uncover the killer’s identity before he chooses his next victim.

In theory, I should have liked everything about this book. It’s creepy. The ghost of your best friend will not leave you alone and follows you around everywhere? Ripe with potential. But I thought the book suffered from lack of focus. There were too many things going on.

First of all, Lillian died of anorexia. This caught me off-guard because eating disorders are usually relegated to the realm of Issue Novels and Paper Valentine is definitely not what I’d consider one of those. In many ways, Hannah enabled Lillian — she knew her best friend had a problem and never sought outside help. After Lillian’s death, however, Hannah is consumed with resentment because she just couldn’t understand why her friend wouldn’t stop. Why she’d go so far as to die from it. All in all, a heavy topic, right?

And that’s the problem. The approach handles anorexia in all its painful glory. But the inclusion in Paper Valentine demonstrated why it’s often only explored in Issue Novels. Namely the fact that I don’t think it got as much attention as it deserved and needed to leave the emotional impact necessary. It was simultaneously heavy yet glossed over. I’m not saying you can’t include these sorts of topics in non-Issue Novels. It’s just that if you do, don’t treat them as an afterthought of backstory detail.

This leads us to another problem. With Lillian’s death, the It Girls who had made up Hannah’s social circle begins falling apart. While Lillian was alive, they were the girls who set trends, who worked not to be Gap and Old Navy clones. Hannah still embraces this aesthestic, but some of the girls not so much.

I’m a big fan of exploring female friendships and relationships in fiction. I don’t think they get enough focus and when they do, it’s usually in the context of rivalry and/or fighting over a guy. There are more dimensions to female friendship than this. So I would have loved to see relationships put under pressure when the queen bee who held them together is no longer present and how growing up alters those relationships. Again, so much potential in Paper Valentine for that and it was squandered.

There’s also a romantic subplot involving the local delinquent with a heart of gold, Finny Boone. I liked the idea of Hannah and Finny: the tiny pixie girl with an artistic bent and the huge boy that’s the product of a system that failed him. But when combined with the things I mentioned above, as well as the murders, it also didn’t get the handling it deserved.

I understand what the novel was trying to do. Hannah’s life stopped when Lillian died. She’s stuck in stasis. Everyone is moving forward but she can’t. She’s still trying to make sense of what happened. The murders are meant to serve a kickstart, to push her forward. Finny’s presence is meant to show Hannah’s evolution from the girl she once was to the woman she will become. The problem is that there were too many disparate threads that never came together.

I really wanted to like this novel. It has many elements that I would have loved had they been the sole focus. Combined together though, the narrative lacked the cohesion that makes stories powerful and great. C