REVIEW: Ours Is Just A Little Sorrow by Gwen Hayes

Ours Is Just a Little Sorrow may be the best title of the year, and the cover is way up there as well. The combination, as well as the blurb, made it hard for me to resist. You describe your novella as “neo-Victorian,” which turns out to be a mixture of steampunk, Victorian historical, speculative fiction, and paranormal romance. The story turned out to be a mixed bag for me. Some aspects of the mashup worked, but in the end there was just too much going on in too constrained a space for it to be successful. 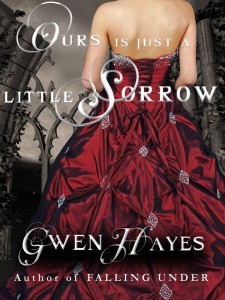 The book opens with our young adult heroine, Violet Merriweather, being sold to a Colonel Malcolm to serve as governess to his youngest son. Violet was rescued from the horrors of a violent and post-apocalyptic Earth and raised in an orphanage on New Geneva, which was settled by Earth residents as a new and more freewheeling colony before Earth’s society disintegrated. New Geneva has altered to become more repressed and conservative, but there are still rebels who keep the old ways alive.

The Malcolm household consists of the widowed Colonel and his three sons. John and Gideon are a few years older than Violet and her charge, Philip, is not quite five. Violet takes quickly to cheerful, bubbly Philip and absent-minded scientist John, but Gideon is difficult, prickly, and sarcastic to everyone. It will probably not surprise readers to learn that Gideon is the most interesting of the family to Violet.

The story is told in Violet’s first-person POV, and she is a comfortable narrator. Violet is no-nonsense and clear-eyed about what her future holds. As an orphaned refugee from Earth, she is socially inferior to the Malcolms. She misses her friends at the orphanage, but she appreciates her good fortune in securing her governess position and sees it as the start of a lifelong career. Given her background, she doesn’t contemplate marriage or family of her own.

Gideon and John are both attracted to Violet, but it’s bad-boy Gideon who lures Violet to join him in nighttime adventures that, if she is found out, will put her position at risk. Violet can’t resist, and she learns more about Gideon and an underground movement that challenges New Geneva’s repressive regime. Violet yields to her desires for Gideon despite her knowledge that anything more than an affair between them is highly unlikely, and she rebuffs John’s gentle overtures in favor of passion and risk with Gideon. Meanwhile, in the background of the family drama, young, unmarried servant women are being abducted and killed by an unknown murderer.

I found Violet quite appealing as a character, Gideon was at about the right level of anti-hero, and the other characters were sketchily but enjoyably drawn. But there was just too much going on and too many plot threads for me to be able to invest in any of them greatly. So much is packed into a short wordcount that the reader is told more than she is shown. As a result, some of the pivotal moments and scenes fall short because we don’t have a nuanced sense of how much the events matter to Violet. The scenes between her and Gideon are the best realized, but other key scenes, like those involving her orphanage friend Shelby, or between Violet and John, seem to come almost out of nowhere.

Similarly, the worldbuilding is interesting but shallow. There are airships and automatons and the story is infused with a steampunk aesthetic, but none of this seems to be crucial to motivating the plot or the characters. Violet has a PEAD (Personal Engine Analytical Device) and an ereader, but these are status markers rather than items which are key to characterization or action. She could just as easily have been given a fur coat to mark her status and comfort level. I like the backdrop, but I’m in the camp that likes steampunk to be more than window dressing that provides a story with cool gadgets and clothes.

This is definitely a romance, so the plot moves toward an HEA. I wondered how it would get there, since I found the depiction of inequality between Violet and the Malcolms that was established at the outset to be quite convincing. Basically, the plot morphs into a full-blown gothic-paranormal-mystery, with a denouement complete with zombies (I learned after I finished the book that zombies and steampunk/bustlepunk are apparently made for each other. Huh). If you like your paranormal steampunk-lite seasoned with some horror, this should work well for you. I found the whole People Are Not Who They Seem To Be twist to be seriously over the top, but I think I would have accepted it more easily had the various threads that came together to make it happen been better integrated into the preceding hundred-odd pages. As it was, the resolution seemed too convenient, and the HEA sat uncomfortably with the family misery, abusive parental behavior, and blood and gore that preceded it.

The writing is smooth and skillful, if a bit prosaic, although that fits Violet’s character. While this is definitely not a YA book (there are a couple of well-written sex scenes), it has the flavor of YA style to me, in that the prose is very direct and there are pauses in the action as well as set pieces that directly impart information.

I liked the idea and the setup quite a bit, and despite my preference for more substantive steampunk, I found the neo-Victorian take enjoyable. But in the end, there were just too many moving parts, all of which came together in the end but in an abbreviated and ultimately unsatisfying way.