I love a good contemporary and this one was recommended by a friend. I can see why she recommended it. The emotional arc for the hero was different and fresh and moving. Jenny Tolliver, the heroine, however suffered from a case of serious blandness. 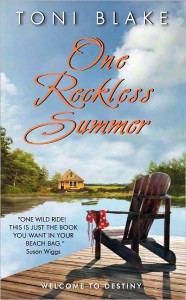 Jenny Tolliver is back in her hometown, licking her wounds inflicted by ex husband. Apparently Jenny was too good of a girl to exude enough passion for her husband so he found it in the arms of Jenny’s 20 year old teacher’s aide.

Jenny’s not sure what she wants to do now. She quit her job and returned to the arms of her father in Destiny, Ohio. I had a hard time understanding why Jenny would quit her job and leave without any plans for the future. It wasn’t explained how she planned to provide for herself after the summer was over. This was a glaring inconsistency in Jenny’s characterization. She is described as someone who worries over small things; who muses endlessly about her guilty conscience. You’d think a thing like not knowing what she was going to do in the fall would bother her or at least be something she contemplated regularly.

Despite not having seen each other for years and despite Jenny believing Mick was an uncaught felon, she proceeds to have unprotected sex there in the woods with Mick. So Jenny is good and stupid but also guilt ridden. Afterwards she flagellates herself for having sex with Mick but you know she’s on the pill to regulate her period so all’s good. Her friend tries to ask her about the disease issue and Jenny replies that she’ll just get herself tested like she did after she found out her husband was cheating on her. Of course, this isn’t the only time Mick and Jenny “forget” to use a condom. I think that I was supposed to believe that the two of them were so lost in passion for each other that condoms couldn’t be part of their encounters.

This series of encounters with Mick occur again and again. Jenny tries to climb the mountain and instead gets a good rogering. Of course, at some point, you know that Jenny is crossing the lake just to get some sex. The problem is that Mick is a bad boy doing an illegal act across the lake and Jenny can’t just turn a blind eye. Even when she promises to keep a secret, she doesn’t. She tells her best friend almost immediately. I really, really got irritated with Jenny.

What makes this book palatable is Mick and the intriguing story that is told about him, his brother, and his way of life. I don’t want to give too much away because what Mick is doing in his cabin across the lake is a mystery that probably should be left for other readers to discover. He’s never been able to rely on anyone but himself. He hasn’t had a lot of softness in his life. While Jenny isn’t terribly reliable (after all she can’t keep his secret for more than 24 hours), she does represent a certain measure of steadiness and tenderness that he had never experienced.

I also like that Mick wasn’t that overbearing alpha male that predominates the genre. He’s had a hard life and he’s suffering and it’s a struggle to just put one foot in front of the other. And really, it is easy to see why the two are attracted to each other. They both represent what the other sees as a void in their lives.

One of the real challenges for me in this book was staying interested because it was pretty predictable. Mick is doing something not lawful and Jenny is the daughter of a “by the book” police chief. There is a secondary romance for the police chief which was nice but it didn’t illuminate the core romance in anyway, but rather provided an excuse for an easy resolution at the end.

Once Mick’s emotional arc had taken place and he was more focused on Jenny, the story’s emotional power waned. I didn’t have the same emotional investment in Jenny’s character arc and thus the latter part of the story held less interest for me. Because this story is so character driven versus plot driven how the reader feels about Jenny and Mick. C

→ Jane
Previous article: Friday Film Review: Love Actually
Next Post: How Do I Use My New Kindle, Nook, Kobo, Sony, or iPad?