REVIEW: One Night in London by Caroline Linden

I picked this one up when I realized I hadn’t read many historicals lately. This is the first in a three book series involving the de Lacey brothers who discover that their recently deceased father may have been a bigamist threatening their standing in society and their inheritances. Edward, the second son, has been managing the estates of the Duke of Durham for some time and thus it falls to him to see to securing the legal claim to their estates while his younger brother searches for the blackmailer. The eldest, and new Duke of Durham, appears to be a dissolute do nothing (I’m sure he’ll have some dark secret to regale us with in his own book). 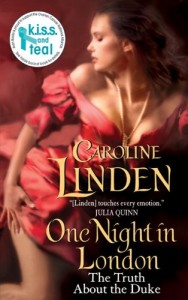 Edward’s plans however, upset those of Francesca, Lady Gordon who is trying to retain a solicitor to assist her in obtaining guardianship over her dead brother’s daughter. When Francesca’s solicitor abandons her case to help Edward, she flies into a rage and confronts Edward, demanding that he compensate her loss by assisting her obtaining a new solicitor. Her fiery demeanor incites a passion in Edward that has been heretofore undiscovered.

The story starts out with Edward engaged to Louisa, a gently bred woman with whom he is in love. Despite his brothers’ urging to NOT divulge their scandal to Louisa, Edward does.

“Louisa!” Gerard frowned. “Must you?”

“How can I not?” Edward frowned back. “She deserves to know.”

His brother looked unconvinced. “I know you care for her, but I suggest you reconsider. You’ll have to put the wedding off because of Father’s death, but there’s no need to tell her of . . . this.”

“Gerard, she is my fiancée,” Edward replied, each word coated in ice. “I cannot keep something like this from her.”

Gerard hesitated. “Perhaps you should, if you want to keep her as your fiancée.”

Edward stilled. “I will pretend I didn’t hear that,” he said quietly. “Louisa is a woman of understanding and discretion. Moreover, she is the woman I love, and the woman who loves me. I wouldn’t dream of keeping such a terrible secret from her.”

Of course, Louisa doesn’t keep his secret, breaks their engagement and sells the story to a scandal sheet. From that point on, Edward spends most of his thoughts contemplating Francesca’s beauty:

Now that he was staring at her, he seemed unable to stop. His eyes roamed over her face, beautifully flushed, and her gleaming hair, so glorious against her skin. The other day, when she railed at him for stealing her solicitor, she’d been magnificent, in the manner of an avenging Fury. Francesca Gordon in a passion was quite a sight. The little devil that had invaded his mind tonight couldn’t stop comparing her to Louisa, who went pale and silent in emotional upset. Francesca—he really mustn’t become accustomed to thinking of her as such—reacted with anger and action. She stormed his house, the home of a total stranger, and upbraided him for inadvertently ruining her hopes. She said she would never forgive him, and smiled wickedly when he called her a managing female. By God, one could have a rousing good row with a woman like this, and then. . .

In fact, it isn’t until 43% of the book (mine was a digital arc) that Edward ponders Louisa’s betrayal, this woman that he loved so greatly that he could not countenance keeping such a secret from her. I think Francesca may have spent more time contemplating Edward’s loss than he did. This bothered me a great deal during the first half of the story. So much of the first half is Francesca and Edward thinking lustful thoughts about the other and that just didn’t fit. Shouldn’t Edward have felt a twinge of hurt, after all, he referred to Louisa as his “idealized model of womanhood” and despite this passage in the middle of the book, his broken engagement has little affect on him.

It hurt too much to think of the woman he had loved, honorably and faithfully, betraying his confidence and jilting him without a qualm. He wanted to know why. He wanted to demand she explain herself, even though he had no desire to repair the breach now. He wanted to know how he could have been so deceived in her character; he had thought her loving and loyal, trustworthy enough to hear his darkest secret and keep it so.

On the one hand, I am supposed to believe that Edward was deeply in love with Louisa. On the other, I’m to believe that this emotion can be cast off in a matter of hours and transferred onto Francesca. Once I gave up thinking about this, I appreciated the story once more. In other words, if I, like Edward, totally forgot about his prior love and Louisa altogether, I enjoyed the romance between Francesca and Edward.

I liked that Francesca, a widow, had a prior good marriage. There were definitely surprises that occurred in the second half that I hadn’t anticipated and that added a level of poignancy to the story. The dispute over the dukedom was set up well and read very plausibly. There was one scene in which Edward was yelling at Francesca for acting dangerously when she kissed him to shut him up which I thought was a nice gender reversal. I actually found the agnst free way in which they embarked on their affair was refreshing and I enjoyed how completely they enjoyed each other.

Having said that, I never saw Francesca as a lively, passionate woman outside of Edward’s previous experience. Sure, she showed a strong desire to be a mother to her niece, but that just didn’t seem very “fiery” to me. And Edward’s character wavered between kind of uptight in the beginning to completely unfazed about having his affair with this widow be well known amongst society. In short, I never got a good handle on either character. I didn’t feel like I knew them. I felt more like their actions were played out according to what the scene dictated rather than having the scene dictated by their characters. Both characters are perfectly likeable, but not very real. C